Crack shot: Mitchell Starc finds his niche at the WACA

The balls of the century, No. 17: Mitchell Starc to James Vince

This ball is ranked 17th in a list of 20, but it might be No. 1 if the rankings were wholly based on unplayability.

Think of its geometry. Mitchell Starc, left-arm fast, bowling from around the wicket and the very edge of the crease, angles the ball into the right-handed James Vince. The angle, remember, is far more acute than if a right-arm-over bowler was delivering from the same spot on the crease. The ball pitches on off stump or thereabouts, and will end up a fair distance down leg if it follows its initial angle.

Given that angle, pretty much any batsman in history would have responded the way Vince did, and looked to clip the ball into the leg side, aiming more towards square leg, probably, than midwicket.

But the ball doesn't follow its initial angle. It straightens off the pitch and knocks the off stump onto its backside. Vince may well have been shadow-practising his flick on an adjacent pitch.

The word "straighten" sounds like an understatement, but it isn't. To straighten from that wide on the crease, a ball has to deviate a whole lot more than if it were delivered from close to the stumps. The replay pulls out the geometry set. The ball deviated 3.9 degrees off the pitch, and if that doesn't sound like much, it equates to 42cm by the time it reaches the plane of the stumps.

Forty-two centimeters. That's nearly 20cm more than the width of the wicket, and it all happens at 143kph. It could very well be the undisputed ball of the century in terms of unplayability, but it's down at No. 17 because of that other factor: intentionality.

The ball only moved so much because it hit a crack.

This was the 44th and, to date, last Test match played at the WACA ground in Perth, and this dismissal was a symbolic farewell to the venue from every fast bowler who has ever bowled there. No pitch in the world cracked up like that one. This was a fourth-day surface, and Australia's fast bowlers were all looking to aim at the cracks that had opened up on it, but Starc wasn't even aiming at the one he ended up hitting.

"We'd sort of identified a bunch of cracks outside the stumps to the right-hander that all three of us were aiming for on the day, and that's why I was bowling around the wicket," he says. "Admittedly I probably wasn't aiming for that crack, because it was a little too straight if it moves [into the right-hander], but yeah, there was a little bit of luck, and fortunately it hit the stumps."

Did he go wider on the crease on purpose, to create a challenging angle?

"No, I always bowl pretty wide on the crease from around the wicket. That wasn't a plan to go any wider."

Starc almost sounds sheepish to have to talk about this delivery. "The crack definitely made it look better than it was," he says. "I've certainly bowled balls that I've planned to bowl that have come off, but yeah, any wickets are satisfying anyway."

I put it to him that no batsman in history could have done anything about this ball. Maybe Don Bradman. With a barn door.

"Likewise," Starc says, "I could have tried that ball a hundred times, I don't think it would have come off again. Unfortunately for Vincey, it just happened to be him [facing it]." 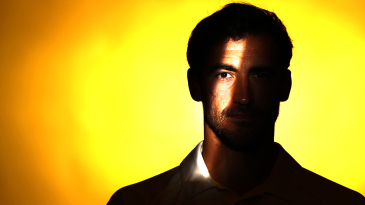