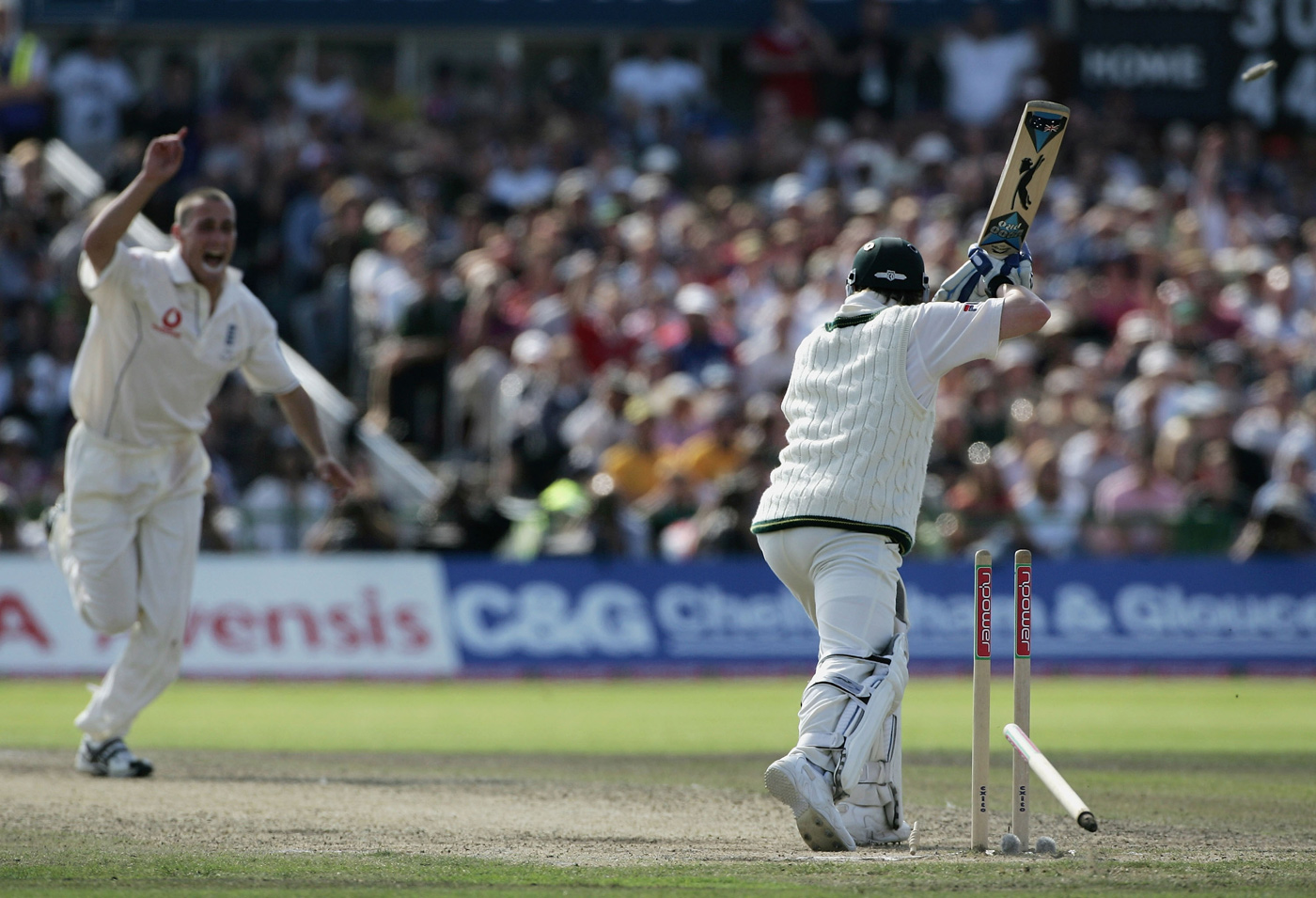 The balls of the century, No. 11: Simon Jones to Michael Clarke

Reverse swing that made you drool

Way back in the dim-and-distant noughties, when in-flight entertainment consisted of the same synchronised video being played on loop for all the passengers on an aeroplane, ESPNcricinfo's UK office once jetted off to Bangalore for an editorial conference.

There we were, strung out in a row across the middle seats of a Boeing 777, cruising at altitude somewhere over central Europe, when word filtered out that the previous summer's Ashes highlights were about to be loaded onto our collective screens.

For the next 20 minutes or so, we all disappeared into our own private little worlds, inwardly reliving every twist, turn, high and low of the most remarkable contest any of us had ever been privileged to witness.

Until, that is, the crucial closing stages of the third Test at Old Trafford, when the bass rumble of the jet engines was suddenly overlaid with the loudest, most mutually onanistic groans ever heard outside of the Mile High Club.

Simon Jones had just bowled that inswinger to Michael Clarke, and if there'd been showers available in steerage, we'd have all dashed off in unison for a cold one.

Have there been better balls bowled this century? Apparently so - at least ten of them, to judge by this one's place in our pecking order. But have there been any more perfect vignettes of bamboozlement in that time, anything quite so graphically pants-down as Jones' exposure of such a precocious star in the making?

After all, most of the deliveries on this list feature batsmen doing the right thing initially, give or take the odd piece of misalignment as the ball begins to deviate, but the coup de grace tends to come via outrageous movement off the pitch.

Clarke, however, was done with the "now you see it" effrontery of a card sharp on the Vegas strip, before the delivery had even left the hand. What's more, his pratfall was then compounded by the most sonorous "thunk" of timber in Test history, before being mounted on a plinth by Mark Nicholas' peerless four-word summation on Channel 4's commentary.

Put that on a six-second loop and repeat a thousand times before breakfast.

The set-up had to be elaborate, as Clarke was already deep into his rearguard innings, with an even share of a sixth-wicket stand of 81 with Ricky Ponting that was beginning to convince Australia that they could dig themselves out of their hole.

"Clarke knows I fancy him lbw, so I decide to bluff," Jones writes in his autobiography. "I start bowling away-swingers, one after the other, enough to get him into a groove of either driving or leaving."

At the start of his next over, Jones would gesture to the crowd to get over their anxieties and give him the lift he needed - for unknown to the wider world at this stage, he was already hobbled by the injured ankle that would pack up for good midway through the next Test and bring one of the great shooting-star careers to a cruel and abrupt end.

But it's that resulting background roar - not dissimilar in pitch to a Boeing engine, in fact - that adds another layer of aural polish to the perfection of the moment, as Jones uses the distraction of the crowd to flip the rough side of the ball with the smooth, and begin his final approach.

"I let the ball go. And I know in that split second that it's perfect. Just perfect, on the same line as all the others … and before it is even halfway to him, he has his hands high and his wrists cocked, ready to watch it shape away from the stumps and into Jonah's gloves like all the others …"

Clarke's final words, just about lip-readable on the replay as he realises he's been done, are "Oh no!" as his off stump goes the journey, and Old Trafford erupts.

For all of its majesty, Jones' wonder ball was not, of itself, a pivotal moment. It tightened the screw in a cliffhanging contest, for sure, but thanks to Ponting, Australia would live to fight another day after securing a final-over draw.

And yet, the doubts it exacerbated in the minds of the Aussie batsmen could not be understated. Like Shane Warne's ball of the previous century, on the same ground 12 years earlier, this exhibition of mastery, in a discipline that his opponents could not rival, would widen the very crack through which Australia's hold on the Ashes would ultimately slip.