After retiring from the game, Chetan Chauhan stayed connected to it in many ways: here he oversees a Delhi pre-season camp, also featuring a young Virat Kohli

The former India opener on what made him and Sunil Gavaskar so compatible at the top of the order, the qualities of a good team manager, and more

I always thought that I would not just be one of those millions who are born every day and die every day. I wanted to earn a name for myself.

Kamal Bhandarkar, my college coach, made me work very hard and made me a tough cricketer. He converted me very quickly from a boy to a man with his wisdom. He told me that being hit is part of the job of an opening batsman.

Cricket made me a good human being.

I travelled from Pune to Mumbai to watch India play West Indies at the Brabourne Stadium in 1966. There was no room in the East Stand, so I had to stand by the railings by the entrance gate. Suddenly the crowds rushed in from all sides and I was caught in a near-stampede. The next day I stood in the queue at 6.30am and got a seat.

In 1967 I got a good half-century against a strong Mumbai outfit. Two years later I made my debut at the same stadium for India against New Zealand.

Gavaskar didn't like playing left-arm spin before a break, so he would ask me to take the bowlers on. Shielding your partner is very important, and for that you need to share thoughts and opinions.

Gavaskar and I would tell each other not to depend on the later batsmen - "Whatever we've to do, we've to do ourselves."

The best bowler I faced was Dennis Lillee. The fastest would be Jeff Thomson.

I opened with Gavaskar in 35 [36] Tests and only once was I run out. A good understanding is key to partnerships. I learned grit and determination from Gavaskar. He had superb technique and tremendous self-confidence. For sheer technique I would rate him highest, though Viv Richards was the greatest batsman I have seen.

When you are batting be as cool as ice, while fielding be as aggressive as you can.

Opening is the most difficult job - people don't understand that, especially in India where there is a big gulf between domestic and international cricket. Openers should be given more opportunities than other batsmen.

I knew my limitations but I knew not to throw my wicket away.

I may not say "born", but openers have a particular psyche which comes naturally. Makeshift openers may be temporarily successful, but in the long term you are doing harm.

I would rate the 192 partnership against Pakistan in Lahore [1978-79] as the best and most timely of our opening partnerships. Records do matter. They go into the books and people do read them.

When I was young I liked to recite this poem by the famous Hindi poet Maithili Sharan Gupt: "Kuch kaam karo, kuch kaam karo/Jag mein rah kar kuch naam karo." [Literal translation: Do some work, do some work/stay in this world and do some work.] That has stayed with me for long.

I do feel bad that I couldn't make a Test hundred, but I played with distinction.

I thought it was unfair that I was dropped after the 1980-81 New Zealand tour. After I was dropped, they tried about five or six openers. I remember Dilip Vengsarkar was going through a slump once and he said in an interview, "Since the time Chetan Chauhan has left I have to come in early to face the new ball."

As the manager of the [Indian team for the] 2001 series against Australia, and before that in Zimbabwe, I made the players comfortable. But I would never interfere with cricketing matters, which I left to John Wright. Ultimately there can be only one coach.

In India we don't realise the importance of a professional manager. A manager needs to be selfless, and not a chamcha [yes-man] of the board.

Gavaskar and I would tell each other not to depend on the later batsmen - "Whatever we've to do, we've to do ourselves." That kept us going.

Kapil Dev was the fastest learner I have seen.

When Gavaskar asked me to walk off with him after being given out lbw unfairly to Dennis Lillee in the infamous Melbourne Test of 1981, the umpire Rex Whitehead said, "Hey Sunny, you're risking forfeiting the game." I did not want to bloody forfeit, especially after we had come back in the game and had a chance with two days to go. But the near-walkout helped us, in fact - the umpires were shaken and later gave some decisions in our favour, which could have gone either way.

I always played for time: I wanted to stay at the wicket as long as possible. In praise of two batsmen who chose to be dour 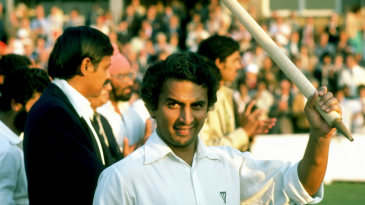 When Sunny made 438 look gettable

Had India pulled off a remarkable victory at The Oval in 1979, Sunil Gavaskar's 221 would be up there as the greatest Test innings