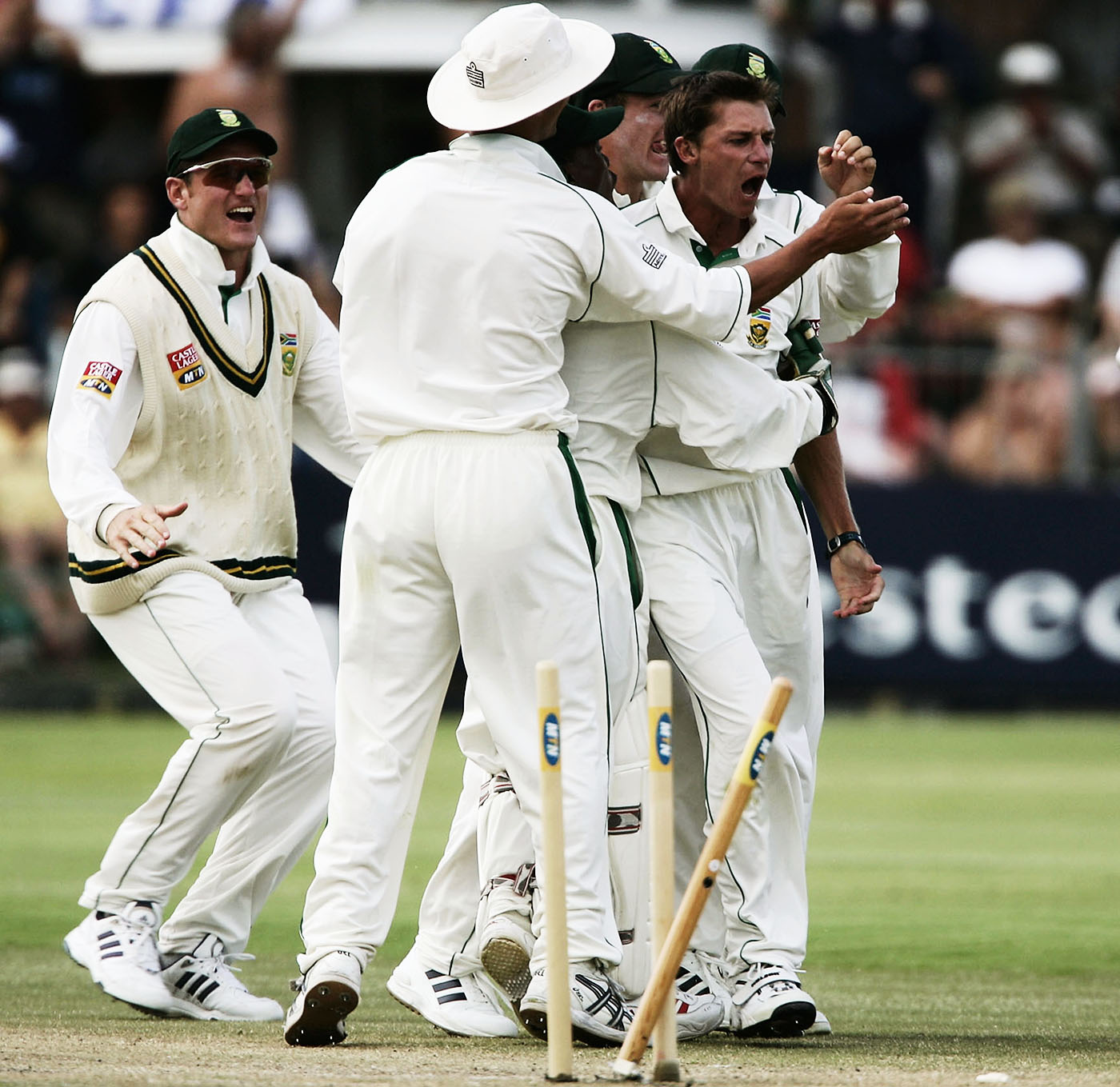 The balls of the century, No. 5: Dale Steyn to Michael Vaughan

Seam at a fierce pace. Or was it swing?

There's a reason why bowlers tend to rate flying stumps and bails as their favourite sight on a cricket field. It is extremely difficult to get a top batsman out bowled when he is not under any pressure to hit out against you. Virat Kohli, for example, has been out bowled only seven times in Test cricket; one out of every 20 times he gets out is bowled.

In all of Test cricket, of all the batsmen who have got out, about 20% dismissals are out bowled. If you restrict it to good batsmen - let's say those who managed an average of 40 over a 50-Test career, which is 118 players - the number comes down to 15.4%.

Bowled is a more common dismissal than lbw but it is the preconditions attached to it that make the lbw a rarer occurrence: not only does the ball have to beat the bat and be headed for the stumps, you have to have pitched it off side of the leg stump and hit the batsman within the stumps. In terms of victories you have to achieve over a batsman, bowled is the most difficult: you have to get past bat and pads and hit that target nine inches wide and 28 inches high from across 22 yards.

So unless a batsman plays on, it is a big achievement to get a good batsman out bowled. Good batsmen are good because they are really good at picking the line and the length, knowing what the bowler is trying to do, and then reacting to it in a manner that involves the least possible risk. Unless you are bowling on a minefield or a green seamer or a cracked-up pitch, there are few things that surprise these batsmen. Barring that kind of help, everything has to go right: the set-up and the pace to keep the batsman crease-bound, the in-between length, late swing or seam and just enough of it so as to beat the bat but not that 9 x 28 wicket.

Michael Vaughan, despite a reputation for getting out bowled, falls right in the middle of that group of 118 batsmen: 15% of his dismissals were out bowled. One of those dismissals heralded the arrival of the best fast bowler of his generation. And he wasn't the most anticipated debutant of that match either.

The Port Elizabeth Test of 2004 came at an interesting crossroads in South African and world cricket. Mark Boucher's continued omission from the Test side after Thami Tsolekile's tough tour of India was termed controversial, with coach Ray Jennings publicly saying he wanted Boucher back. England were not yet being acknowledged as a resurgent Test side because they hadn't yet won the Ashes of 2005. This was, according to cricket writer Telford Vice, the first time the Barmy Army had taken over a South African crowd, drowning the brass band with their own songs and trumpet.

In this politically charged environment, two future legends - AB de Villiers and Dale Steyn - debuted, but the signs were clear that England were getting stronger, and South Africa's cricket economy was beginning to depend on those outside the country. On day five, just after the first hour of what looked like a facile chase, Steyn shook everyone and everything up.

Vaughan had been grumpy all Test at his side for letting South Africa back into the contest again and again. Chasing 142 to win, he saw an opener and the No. 3 bag ducks, and was now left even more annoyed when Steyn announced himself by flattening his off stump.

This ball ticked many boxes. The length was the shortest possible you could hit the stumps with. It was that perfect delivery that goes so late that it leaves you wondering if it swung really late or seamed. It pitched middle and off and straightened just enough to beat the bat but not the off stump. It also had the batsman playing back; had Vaughan played forward, he would have probably covered the movement.

There is not much else known about this ball, about a build-up or whether there was a set-up. All we have is a 15-second clip on YouTube, minus a replay. There is no legendary commentary around it. It is not significant from the point of view of the result: a former South African, Andrew Strauss, ruthlessly thwarted any hopes of a miraculous comeback. Yet it endured as that delivery. I asked journalists at the game if there had been anything significant before the ball to have pushed Vaughan back, but they couldn't recall anything. No report, no ball-by-ball commentary, no clips willing to help me, I finally turned to the man himself.

Turns out, Steyn was worried about more mundane things at the time than setting a world-class batsman up. Both sides had bowled a spate of no-balls in the match: 57, the most in a Test in South Africa. Most of it was down the gradient at St George's Park. From Duck Pond End you run downhill, from Park Drive uphill, but when you hit the pitch it sort of straightens out. Steyn had himself sent down 16 in the first innings. At this time he was running downhill from the Duck Pond End, so all he remembers of the lead-up is telling himself not to over-stride because of the slope.

"Genuinely I can't remember if it was a set-up job," Steyn says. "Sitting here right now, I don't think it was. I have done on other occasions: maybe bowl wide, then a short one and then the fuller straight one, but that particular ball, I think, I was looking for all three modes of dismissals. Lbw, caught behind and bowled. It turned out to be a goodie. Hit something on the pitch, straightened nicely."

That last sentence made my ears prick up, but I wanted to get Vaughan's lack of foot movement out of the way. "I am thinking: at that young age, did I set him up?" Steyn says. "There may have been a short ball. Because that is what I was good at: good quick bouncers. There may have been a short ball somewhere before that delivery. Whether that happened a ball before or five, I can't remember."

Did he think the ball seamed and swung? "If it did swing, it would have gone really late," he said.

Without my prompting, Steyn says he was lucky Vaughan's feet didn't move - it resulted in a repeat at Lord's in 2008 - but the rest of it was not unremarkable. "PE doesn't genuinely crack open like the WACA does," he says. "So you don't have those big cracks like with the one Mitchell Starc bowled to James Vince. It was a phenomenal delivery. Or the one that Ryan Harris bowled to Alastair Cook. That is one of my favourite balls. It was a great delivery."

I didn't think this Vaughan dismissal was the best delivery I had seen Steyn get a wicket with. That for me was the one he bowled to Cheteshwar Pujara in the 2010-11 Newlands Test. That ball started swinging from maybe outside leg, pitched on leg, and swung past Pujara's bat to trap him lbw. Steyn explained a crucial difference to me. The Pujara ball was fuller, which means it was easier for the batsman to move forward and defend or even on-drive. It also had more airtime, which gives you more of an idea what is coming your way. So even though less spectacular, the Vaughan one is more special to Steyn.

Vaughan is, of course, terrified at the prospect of facing 90mph late outswingers (or was it seam?). After the Lord's encore, he kept the off stump as a memento of a tussle with a great bowler. No one has a more impressive highlight reel of magic balls of this kind than Steyn; there are too many for him to pick his favourite on the spot. Most of them are either swing or really late swing morphing into seam. What goes into bowling these deliveries?

"Everything needs to contribute," Steyn says. "Firstly you need to put it in right area. Every pitch you play on is kinda different. If you bowl on a good length in south Africa, it might bounce over the stumps. But if you bowl that length in India, it will hit halfway up the stumps. It is about getting the length right. Then the batter playing his part. He has got to make it look really good. Play down the wrong line or have no feet or something like that. Often these balls do the batsmen for the lack of feet movement. The ball probably wouldn't look half as good if he had gone forward and got bat or pad to it. So we oughta thank the batsmen for making it look good."

But don't bowlers make sure the batsmen's feet don't move through the pace of the set-up?

"Ja. I mean consistently when you try to land the ball in the right place…" Steyn says. "I may have bowled the exact same ball a couple of balls before, but he has gone forward and played it. Then that ball, he may have been expecting a short ball or something slightly different. You do play with a batter's mind. The more you bowl in international cricket, the better batters you play. I think they give bowlers more credit than they are due. Bowlers are trying to hit a good length all the time. Maybe the odd bouncer here or there. Sometimes they get themselves out, these batsmen."