Who should be the judge of what is an unplayable delivery?

When you watch this ball, think about the angles. Think about whether you have ever seen anything remotely like this from an offspinner. Or whether you will again.

Muttiah Muralitharan is coming around the wicket, bowling from about as wide as the laws allow. Although his landing foot is a few inches inside the return (side) crease, his arm is coming from almost outside the cut strip. He floats one across left-hand opener S Ramesh, who is batting nicely on 55, having faced 163 deliveries. The ball is travelling at such a skewed angle across the pitch that had it not wavered from its original course, it would have missed a second set of stumps on the leg side.

Because this is Murali you know there will be crazy turn. But on this one there is also late drift. In the last fifth of its pre-bounce journey, the ball straightens suddenly, like a school student the moment a teacher walks back into the room. When it pitches, it rips. But perhaps because there is overspin as well as sidespin, it also pounces - a leopard from the long grass.

It's possible that Ramesh doesn't really think the bat is going to be required here. He seems half inclined to pad it away. You suspect it is that drift that prompts him - late - to offer even a half-hearted defensive shot.

In the end, the bat is coming so far down the wrong line, it's not even close to making contact with the ball. Before the batsman has even processed what has happened, wicketkeeper Kumar Sangakkara has started celebrating and that wide grin has descended on Murali's face. Ramesh spends a few moments at the crease, looking back at clattered stumps in utter disbelief.

On air, Tony Greig (who had this uncanny ability to be on air for all of Sri Lanka's momentous occasions in this era) is asking why the batsman is still standing there. As it turns out, Murali himself was in mild shock at how that ball behaved.

"I didn't expect it to turn so much," Murali said of the delivery. "At the time Ramesh was playing well, and I thought I had to change the line. I tried bowling something outside the leg stump to see whether he would sweep and get a top edge. That didn't happen because he probably saw it being too far outside the leg stump. But then it spun back and hit the top of off. He probably didn't think - and I also didn't - that that ball could hit the off stump."

What makes this drastic turn even more incredible is that this was achieved on a staggeringly lifeless pitch. Sri Lanka had just made 610 for 6 in the previous innings, and India were comfortable at 147 for 1 when this happened. Sri Lanka would eventually win this Test by an innings, but to do so they needed nearly 47 overs from Murali, plus three run-outs. Murali's line of attack for this delivery was, in fact, a result of frustration.

"I don't remember bowling around the wicket for that long at Ramesh, because you generally don't try to get wickets from that side," Murali said. "But sometimes you have to try to get them to play a false shot. When you bowl outside the leg stump, the batsman will think it's a free hit, no? But if it turns a little bit and bounces, then you can get a top edge."

Does Murali think this was the best ball he ever bowled? No. In fact, just off the top of his head, he rattled off two others he thought were better.

"For me, in Tests, I like two balls I bowled - one to Martin Crowe in 1992, which pitched way outside off stump and hit the leg stump. Then another one was in 2004 - a doosra that bowled Darren Lehmann in Galle."

The ball to Lehmann raises a vital question: when it comes to mystery spin, can we spectators ever really judge the unplayability of a delivery? Lehmann, one of the best players of spin in one of the greatest batting orders that has ever played, was utterly deceived by this doosra. That ball might not have turned as sharply as the one to Ramesh, but Murali's disguise in itself might have made it a better ball.

This is cricket at its most intimate. Only the batsman and bowler could ever testify. 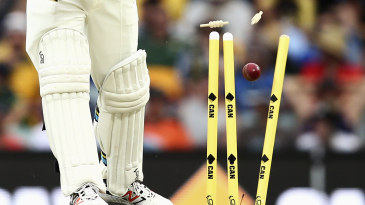