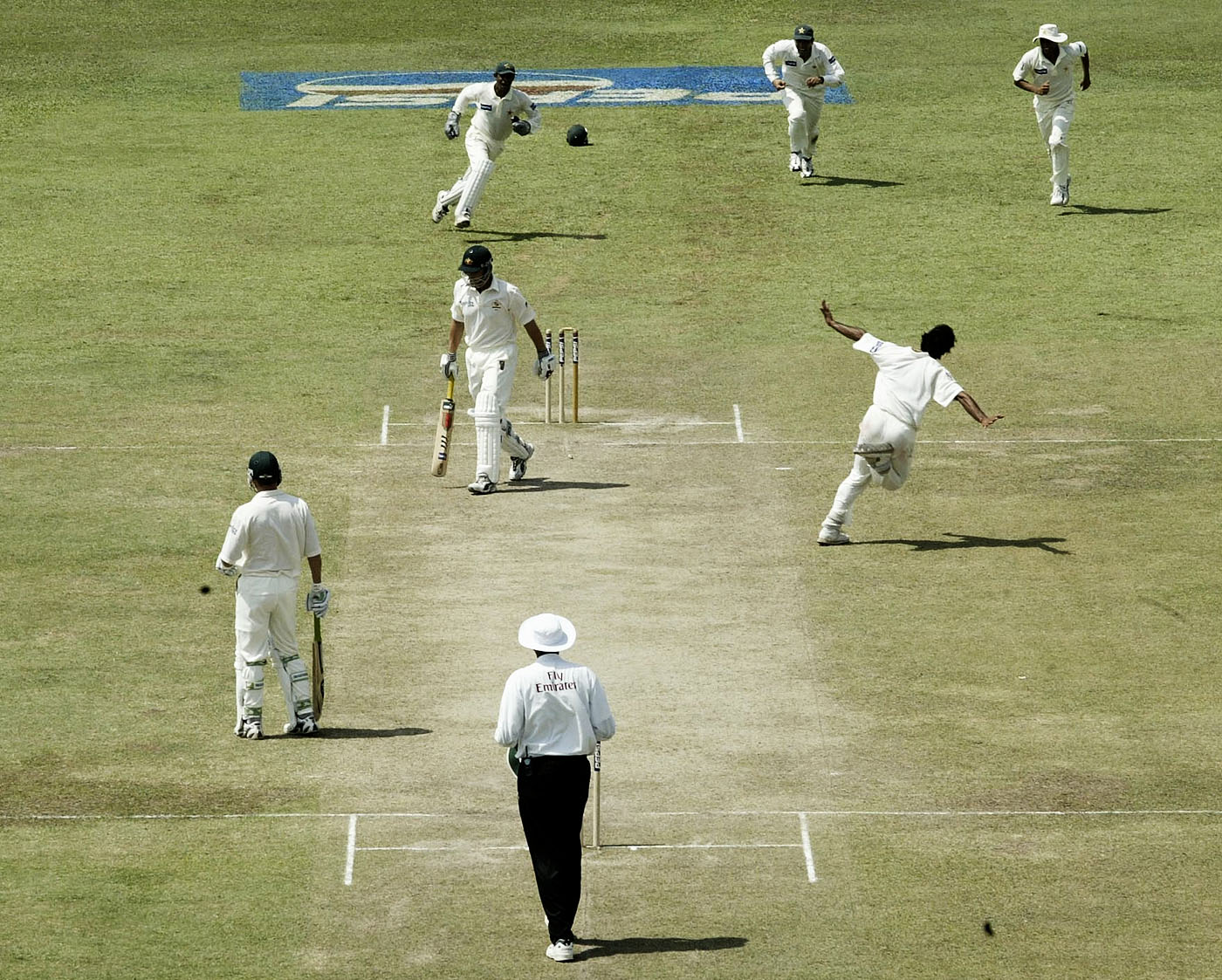 The balls of the century, No. 6: Shoaib Akhtar to Adam Gilchrist

The last of the great reverse-swinging yorkers

It's not so much that the delivery became old and stale as that batsmen wisened up and then started countering it in unimaginable ways. Batsmen, that is, and TV cameras, trained to pick up on a stray fingernail or mint doing something it shouldn't be doing. Because even today a successful reverse-swung yorker - fast, late swing and dip - is a spectacle: no delivery lit up last year's World Cup, for instance, like Mitchell Starc's to Ben Stokes.

And few deliveries have lit up the century like this one. Shoaib Akhtar to Adam Gilchrist, Shaibi to Gilly, the pick of one of the last great spells of old-school reverse swing bowling; a time when yorkers were the default length for reverse, most reverse lasered into batsmen and, for best results, was done at extreme pace. This was a time when bowlers used reverse to blow batsmen away, rather than teasing them out in some cutesy, double-bluffing way. In fact, "udaa de" - blow them away - was about as tactical as it got with that spell.

With characteristic understatement, Akhtar remembers it was 40 degrees and 100% humidity that day in Colombo.

"Drenched with sweat. I was pouring water in my shoes. It was that hot. I wore four pairs of socks, cotton ones, so my foot doesn't slip inside. What we did, Rashid bhai [Latif], Vicky bhai [Waqar Younis], myself, we said, let's do small, short spells. If you get a wicket, then blow them away, udaa de."

Ricky Ponting was that wicket, a dismissal off a ball of such filth, it's not worth describing. Pace: 81.5mph.

Twenty-one thousand and 54 Test runs, 57 Test hundreds, averages from 42 to 50 (before this Test), kaput in four balls, bowled, bowled, leg-before. Already this is some spell.

Saqlain Mushtaq bowls the next over, gets Matthew Hayden, and who's in now as Shoaib resumes? The guy who's averaging 60 in Tests, strike rate of over 80, and a genre-transforming freak.

"Another guy who's been after my life, after my bowling, my case, for all his life. Gilchrist. If I don't get him out what will happen?"

Shoaib and Pakistan knew better than most what would happen if Gilchrist didn't get out. And Shoaib knew he had, at this pace and in this heat, another two overs maximum after that first one. He had to make it count.

He remembered that he had ended Gilchrist's Test debut innings - 81 off 88 - with a yorker from round the wicket, a eureka moment of sorts when he discovered a length and angle that could work.

"His bat used to come down from gully, closing the face late. So I thought I'd go round the wicket and try to hit between pad and bat."

Halfway through this next over Shoaib decided he had to go big now. Jaan se bhi zyaada jaan di on this fourth ball - or, as he added, "If I have five litres of blood in my body, then I bowled that ball with the force of six litres."

The length was right but the line wasn't, and Gilchrist ran two leg byes. Pace: 90.8mph.

"I blacked out after that ball. That was the fastest I have bowled to him. It took me 15-20 seconds to get back."

There's a bit of biomechanical detail for what follows next from Shoaib - a tighter locking of the wrist, a slightly changed arm position - that is difficult to understand without being shown it. But the crux is that he wanted to go even quicker, to find another litre of blood to pour into this, to put even more jaan - life - into it.

Last ball of the over, bingo. The line is better. Gilchrist's bat comes down from gully but the ball's delivered in BC and his bat's down in AD, that's how late he is. It hits leg stump on the full, bending as much with the angle as with reverse - so quick, it's tempting to conclude, it's not in the air long enough to reverse.

Slower than the ball he was trying to be faster than and 10mph slower than it looks and feels. Let's keep that between us boomers, though.