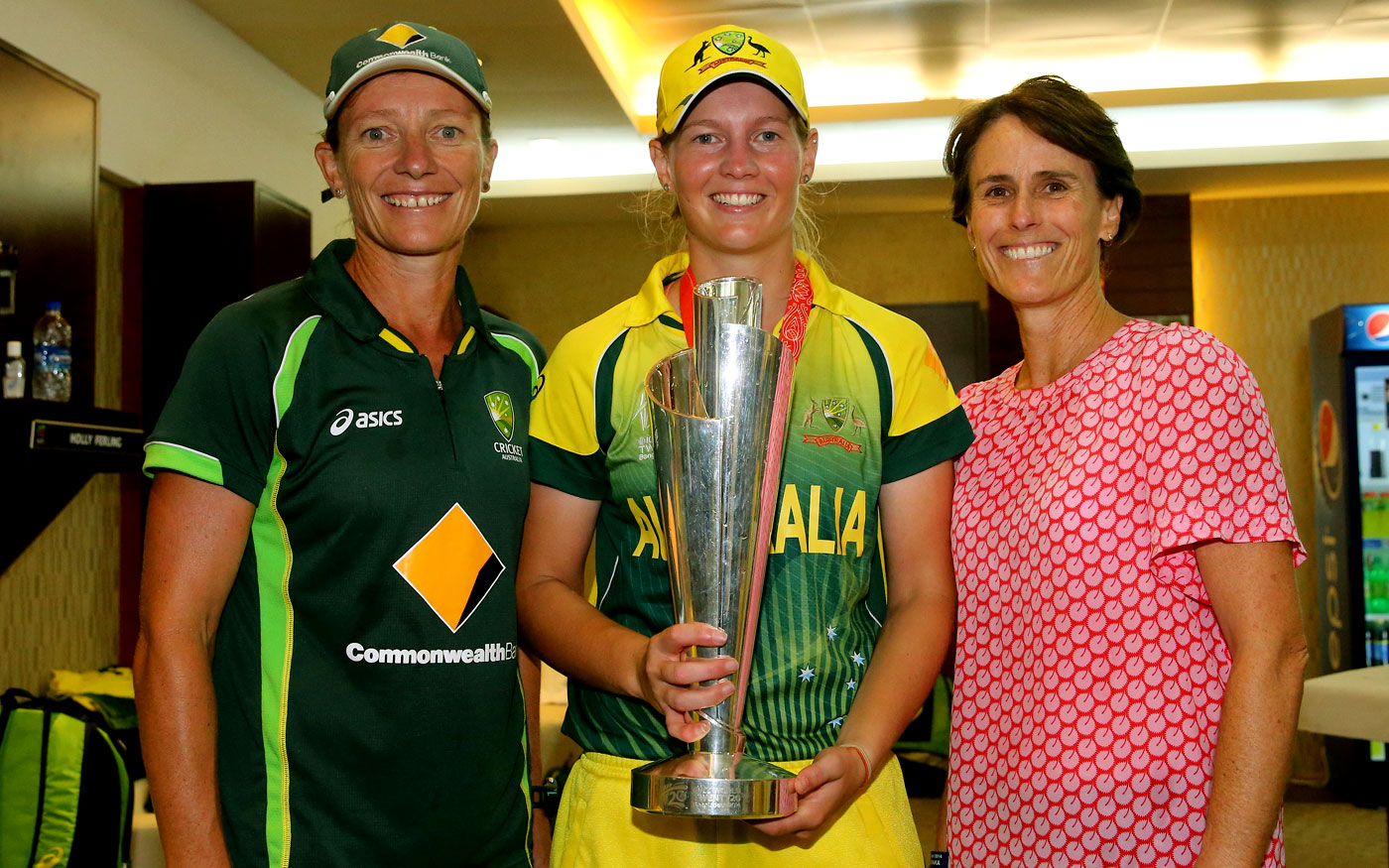 All aboard the World-Cup train: how many trophies between Cathryn Fitzpatrick, Meg Lanning and Belinda Clark?

Alex Blackwell is a former Australia captain and the country's most-capped female player, having played 12 Tests, 144 ODIs and 95 T20Is. Here she picks a women's white-ball XI that she would like to be a part of, featuring her contemporaries, opponents and all-time greats.

Belinda Clark (c)
A reliable batter with the best technique among anyone I've watched play. She was a phenomenal leader, and one of the most successful Australia captains ever. Growing up, I admired Belinda. She was my hero and features in two pivotal moments in my career - one when I received an individually signed poster from her for each one of our victorious primary school girls team in the New South Wales state knockouts. I have it to this day, and Belinda saw it hanging on my wall in my home on my 21st birthday party, when I was playing for Australia under her captaincy.

Shelley Nitschke
I've had several batting partnerships with Shelley, an aggressive left-hander who took the game on with a firm and direct approach. She debuted at age 28, so she brought into the game the wealth of life experience she had had by that time. She kept things simple, and her competitiveness kept me on task. She was a brilliant left-arm orthodox spinner too, so she is a shoo-in in this XI as an allrounder - a top-order batter who can double up as a frontline spin bowler. Her 7 for 24 against England in 2005 was a terrific feat to achieve in an ODI, an Australian record broken only last year, by Ellyse Perry. I still remember the wicket celebrations from that 2005 game: Shelley Nitschke, spunky blonde hair, somewhat intimidating, bringing out that little under-fist pump.

Karen Rolton
Rolly would just demolish the opposition with her batting. I don't think I've seen a more destructive batter than her. I loved how she hit the ball, her self belief. She was markedly different off the field: a quiet and shy person; not as sure-footed as when she had a bat or ball in hand. She, too, was part of a different era and played only 15 T20Is. It's a shame she didn't get the opportunity to demonstrate that destructive power in the short format of the game. Her batting was so good that her accurate left-arm skiddy swing bowling - remember, there haven't been many left-arm quicks in women's cricket anyway - was somewhat underplayed by people despite it having been such a huge asset to the team because it added so much versatility to Belinda Clark's attack.

Meg Lanning
She is just so good. She can do anything with the bat. She doesn't need the shots I required: the paddles and the reverses. She hits with power through that point and backward point region like no other player. As an Australian team-mate, I used to joke with her about getting a bit more agricultural; she couldn't really slog, which was probably my best shot. That she's got so many records against her name so early in her career is a testament to her calibre as a batter. At just 18, she was a key member of the line-up. The century she got in her second game for Australia, against England at the WACA, sticks out to me as does the one she got against New Zealand at the North Sydney Oval. In the latter, she hit a six, sort of flat, top-corner of the sight screen. It travelled like a tracer bullet and the noise it made upon crashing into the sight screen… unreal. There's a lot people can say about Meg, but I'm not sure we've seen a better batter.

Alex Blackwell
I see myself batting at No. 5 in this line-up. I have batted with the top four here, and although my best position probably was No. 3 or 4, I see myself performing the role of No. 5 or 6 here as I did in the back end of my career, because I was good to go in when s**t hit the fan. I was quite innovative and, if there are not many overs left, I would take the game on. I was brave on that front but perhaps not as consistently good in the icing-on-the-cake role. As the No. 5 or 6, you should be able to do both, which I was on most occasions, but probably better in the first role. 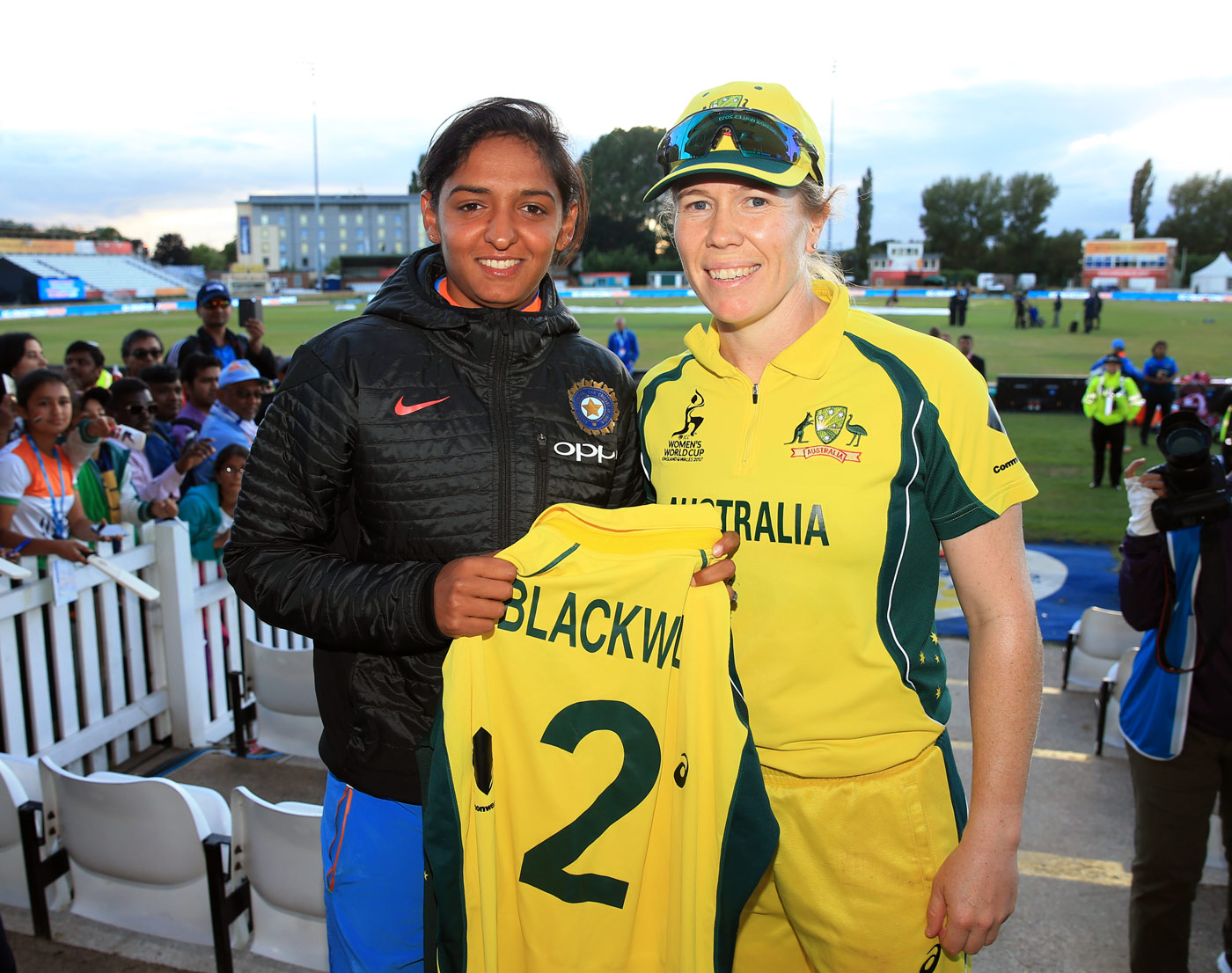 Harmanpreet Kaur
The game is never over if Harry is still coming. I captained her at the Sydney Thunder in the WBBL, and later coached her in the Lancashire Thunder at the Kia Super League. She's a match-winner, so I wanted her in my team and I was excited we got her at Sydney Thunder. Her first game at North Sydney Oval, under lights, she hit a six, and the commentators just lost it. Her being of that slight frame, she paces herself in well and then pulls the trigger. You just can't stop her after that. I have had to bear the brunt as an Australia cricketer when she tore us apart in that semi-final. She's one of the most exciting players to watch. She takes a bit of time at the beginning of her innings, so can be unpredictable. I admire the trust she has in herself and that she takes it upon herself to win her team games. She has that characteristic bat swing of hers: unique, high hands, using all the leverage in her bat swing to generate that power. As a part-time spinner, too, she can be very handy.

Sarah Taylor (wk)
She is the best wicketkeeper we have seen. A wicketkeeper like her wins you matches. I vividly remember how Sarah had once anticipated the reverse-sweep of my captain, Jodie Fields; it was the just the most incredible, most stupid catch, like, no one does that! And she adds great value with the bat; she's very entertaining to watch - like Harmanpreet, I enjoy watching Sarah, the batter, in action.

Katherine Brunt
I've played with her at the Kia Super League, as part of the Yorkshire Diamonds. We got to know each other as friends and team-mates. However, even though we were respectful rivals of each other for a long time, as far as our Ashes battles over the years go, she's someone I didn't enjoy coming up against. Just sort of white-line fever, great presence on the field, brings a lot of fiery nitrate to any line-up, and add her very high skill levels to that mix. It all made her one of the best bowlers of my time, one of the best bowlers I've faced. I hated getting out to her. Besides, she's a good batter. A formidable package.

Cathryn Fitzpatrick
You have Brunt at one end and Fitzpatrick at the other. Fitz was the fastest bowler of our time, and a fiery fast bowler at that. She was good tactically as well. She was the leading bowler in Australia back in the day. I roomed several times with her, as part of the senior-junior type of arrangement they had in place at the time. While most people picture her as an intimidating figure running in, steam coming out of her ears, she was a softie. I found her very thoughtful as a roommate; she looked out for me, the junior-most person in the team.

Amelia Kerr
She is one of the most skillful spinners going around. With a fantastic wrong'un, her attacking style of bowling makes her so impressive at such a young age. I have not played alongside her, but she brings in batting prowess as well.

Sophie Ecclestone
An incredibly talented cricketer, she is a wears-her-heart-on-her-sleeve kind of bowler. As someone who played against her when I was in the Australian team and then coached her, I explained to Sophie that she can be the most intimidating spinner in the world. Skill-wise, she is there, but her demeanour on the field was letting her down. I think she took that head-on and improved her game significantly - something I witnessed during my time as the Lancashire Thunder coach. She, too, has good batting skills, but going by her bowling alone, I have reasons to believe she is going to be an exceptional player. She was also the last person to dismiss me in international cricket; she can be my No. 11. 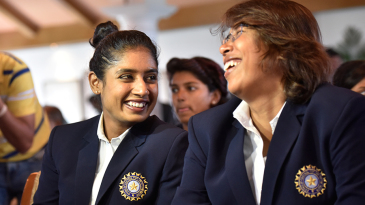