Goswami (right) with her pick for No. 4, Mithali Raj

Fast bowler Jhulan Goswami has played ten Tests, 182 ODIs and 68 T20Is for India, and is the highest wicket-taker in women's cricket. Here she picks an all-time white-ball XI she would like to play in.

Belinda Clark (c)
The former Australia opener and captain will lead my XI, because she is a leader unlike any other - both on the field and off it. Australia won two ODI World Cups under her and she excelled as an administrator for Cricket Australia, developing women's cricket from the grassroots level. I would love to play under her so I can witness first-hand how she manages her resources, assigns her players roles, and deals with demanding situations.

Heather Knight
Heather led England to their home ODI World Cup win against India in 2017. She is a very talented cricketer, is in control of the match situation most times, has clarity, and is mentally very strong. She has been a very consistent batter in the one-day format for England over the years and lends solidity to the line-up. So, aside from opening with Clark, her formidable offspin bowling makes her my No. 6 bowling option, which is a must in one-dayers.

Karen Rolton
It's hard to find a better No. 3 choice than Rolly, an all-time favourite of mine. By the time I debuted, she was already a superstar for Australia. I remember we had to plan hard for her because she used to play so late - so tactful, and so extraordinary and powerful were some of her shots that it was really difficult to get her out. As the opposition she used to frustrate us, and left us wondering how she could generate such power. She played all over the park in the 2005 World Cup final against us, and in 1997, too, when I was a ball girl at Eden Gardens. She retired when the women's game was taking off, the T20 format especially. In today's domestic T20 leagues, she would be the highest-rated player. Her calibre, her range of shots, how she'd go about her innings, her control, were unrivalled. As a bowler, I have always wanted to be in the same side as her rather than having to bowl to her. Her batting was great and her left-arm medium pace was as good. She has some 70-80 wickets in the [ODI] format, which speaks of her skills as a bowler.

Mithali Raj (vice-captain)
The highest run getter in ODIs, as technically correct a batter as can be, knows her game very well, plus a strong-minded person - Mithu is my undoubted No. 4 pick. Her cover drive is the best in the world and youngsters should really learn a thing or two from her batting.

Her hundred against New Zealand in the must-win virtual quarter-final in the 2017 ODI World Cup is proof of her class as a batter. We were under the pump, the weather was unreliable, our openers, Smriti [Mandhana] and Punam [Raut] got out early. Mithali walked in and anchored the innings, which allowed Veda [Krishnamurthy] and Harry [Harmanpreet Kaur] to play around her. It was her knock that shifted the momentum in our favour. Once she took control it looked as though the swinging conditions suddenly disappeared and Mithali was batting on a paata (flat) pitch. That's what leading from the front looks like, and that's the hallmark of a quality batter and leader. She's my vice-captaincy choice in this line-up. She is a good leader and you want to make use of her experience when making adjustments in the field and bowling changes. Cut from the same cloth: why have one Taylor when you can have two? © Getty Images

Claire Taylor
Soft-spoken person, very nice off the field and an equally good athlete. Her running between the wickets and her innovative strokeplay were amazing. Till her very last match for England, she was a prized wicket for every opposition bowler. She used to bat at No. 3 and her role primarily was of an anchor. So she would start off slowly and graft her innings. Back in the day the current powerplay rules didn't apply, so by the time we entered the 40th or 45th over, Claire would be set up nicely and she would bring out the sweep, reverse, paddle, scoop and get runs from all parts of the ground. And she was particularly good against the spinners. She made a career-best 156 not out against us at Lord's - an outstanding knock, it was. That made her the first Englishwoman to hit a century at the ground. And she played a major role in two of England's World Cup-winning campaigns.

Meg Lanning
What do I say about Meg Lanning? Right now she's one of the best batters in the world across formats. She has been leading a team full of superstars and performing consistently well with the bat, scoring under pressure day in and day out. So credit to her for doing so well for herself and the Australian team at large.

As a bowler, I find it challenging to bowl to her. She picks lengths very well, has got brilliant control, and her range of shots is very good. The margin of error with a player like Lanning is very low, so she asks for more precision and discipline from bowlers. If you go off the mark here or there, she will pounce on you. So you have to put in the hard yards in the nets and make sure you keep bowling to her in that nagging corridor of uncertainty.

My preparation for Lanning in that [2017 ODI World Cup] semi-final began two-three days earlier, because as a senior player in the side I knew how important it always is to get her out as quickly as possible. My role was to contain her, not give any freebies early on, and I practised quite a bit in the nets and imagining a Mithali, Harman, and Smriti to be Meg Lanning. And I kept bowling in that area of uncertainty, not giving her room outside off, and forced her to play straight. My planning worked for Lanning that day [taking the top of her off stump].

Sarah Taylor (wk)
She changed the perception of wicketkeeping in world cricket. Legends of the game, including Adam Gilchrist, have often described her as the best wicketkeeper in the world. In my view, there's hardly anyone as agile, graceful or effective as Taylor. Her leg-side stumpings are absolutely unbelievable, her gathering impeccable, anticipation amazing. She is one of my favourite wicketkeeping allrounders of all time. She is also an intelligent batter, and in my line-up she fits in perfectly as a finisher.

Cathryn Fitzpatrick
A pacer who has been my idol. In my early days in international cricket, I used to quietly watch her in the nets, and ask some of my friends like Lisa Sthalekar to explain to me what her processes were like. Not only was she the fastest, she used to bowl very good bouncers. Off the wicket she used to be quick, so that left batters with very little time to react, and she was a clever bowler overall, especially with her pace variations. Regardless of what type of pitch she was bowling on, her success rate used to be high.

In 2004, when Australia came to India, I remember we used to discuss two-three things in all our meetings: one, how to get Karen Rolton and Belinda Clark out, and two, how to avoid giving Fitzpatrick a wicket early on. Such was the fear she would put in the minds of her opponents.

It's a trend in women's cricket to encourage medium-pacers to become spinners, but Fitzpatrick was one genuinely quick bowler and the first one I saw who would hit the deck hard. I think Fitzy's success in a way established that, in the women's game, which is largely dominated by spinners, medium-pacers who are good at their craft merit as much respect. Lisa Sthalekar
As an offspin-bowling allrounder, Lisa can be a handful for opponents. She is a smart cricketer, so you can rely on her intellect to draw up strategies as well. She is a good friend, and a genuinely nice person off the field.

Jhulan Goswami
The biggest incentive for me to pick myself in the line-up is to bowl in tandem with Fitzpatrick and not having to bowl to Rolly! So given I can be in the shoes of coach, captain, and selector all at once as far as picking the team goes, I think I would be a decent fit as a strike pacer. I would love to learn a few tricks from all of my team-mates here because I admire each one of them immensely. As far as opening the bowling goes, Fitzy being the hero, I'd let her go first, and I will go next.

Neetu David
India's best female left-arm spinner. Period. A genuine spinner of the ball, she used to turn the ball in India, Australia, South Africa, New Zealand - everywhere. Bol, bol ke wicket le sakti thi woh (she could take wickets effortlessly). We used to have 15 overs' powerplay earlier, so on days when some of us went for runs, the captain would invariably bring Neetu into the attack and she'd provide the breakthrough.

Her lines and lengths were very disciplined. And her biggest strength was her diligence - she used to do spot-bowling target practice for hours on end. When I debuted for India, she was already very established, and widely respected by her team-mates and opposition players. I remember asking her one day why she spent so much time in target practice. She explained, "That's how you build your muscle memory and be able to hit your desired line and lengths at will in the actual game situation, under pressure, without errors." To date, I have kept her words in mind and do spot-bowling practice.

Stafanie Taylor (12th player)
In the event of an injury to my first XI, the West Indies captain, also one of the best allrounders in the women's game today, will be my automatic pick for replacement. 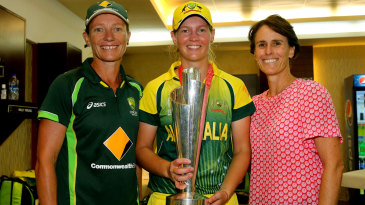