I was six when we won the 1996 World Cup. I loved that whole team, but I especially loved Sanath Jayasuriya. He dominated the bowling and batted so aggressively. After that World Cup, he batted beautifully in the Singer Trophy and Asia Cup, and when Sri Lanka used to play India, he'd go after bowlers like Javagal Srinath and Venkatesh Prasad. He and Romesh Kaluwitharana got so many fantastic starts in that period. When I watched Sanath aiya bat, it was almost like I was playing in the game myself.

I've been a left-handed batsman since I was little, and I think that has partly got to do with Sanath aiya (I write and do most other things right-handed). My stance and my bat grip were just like his in those days as well. We used to play in the garden, and there were a lot of boys in the neighbourhood, both older and younger, I used to play with. I was the only girl, but it wasn't easy for them to beat me. I won a lot of the time, actually. I used to play Sanath's flick and cut often. Even now people tell me that I have many of Sanath aiya's shots. I guess I loved his batting so much some of it was going to seep into my game. I even tried to bowl left-arm orthodox like him. But it didn't work so well, so I switched to offspin.

Back then I used to imitate the bowling actions and batting stances of a lot of that 1996 team. I'd even know how to walk to the ground and take guard like some of those players. I used to imitate these for my father's office friends and they loved it. I could bowl like Muttiah Muralitharan or Kumar Dharmasena or Pramodya Wickramasinghe or Ravindra Pushpakumara. With Sanath aiya, I could do so many of his mannerisms - how he adjusted his pads, how he pushed his helmet up and down. I can still see all that in my mind, because I copied so much of it when I was young.

Over time, as I came up through the school and national cricket systems, and had a lot of coaching, I developed my own style. But you can still see a little Sanath aiya there. I really liked his flick shots, and I also loved the sixes he used to hit over point and extra cover. In the T20 World Cup this year, I hit a six over sweeper cover as well, which is something that a lot of players can't do. Recently, there was a video showing the similarities between his batting and my own, which I had a lot of fun watching.

Towards the very end of his career, on my birthday in 2011, I got the chance to bat in an adjacent net to Sanath aiya. After he'd finished in his net, my coach told Sanath aiya that I was a big fan, so he stopped and watched me bat for a bit. My coach also told him it was my birthday, and Sanath aiya joked: "Where? I didn't get any cake." Later, I made sure to take him a piece of the cake I'd brought for the team. In exchange, he gave me his bat, gloves and pads. I still have them. They mean a lot to me.

In later years, after he became chief selector of the men's team, he was around the grounds where we trained a lot. I was captain at the time and he'd come and give us a little advice. He told me not to load too much pressure on myself, and to bat positively. He told me to express my own character without worrying too much about the situation. I still see him around from time to time, and I make it a point to go and speak to him. He encourages me a lot.

There are still some things from his game that I'd like to adopt. He played spin better than I do - he played offspinners especially well. He also batted with a lot of patience, which I need more of. He's someone who changed Sri Lanka's cricket completely. I hope he reads this article. And I hope he inspires more cricketers, just like he inspired me. 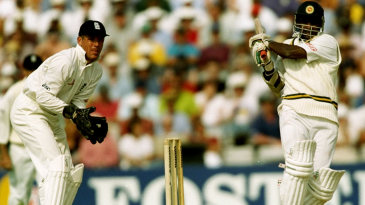 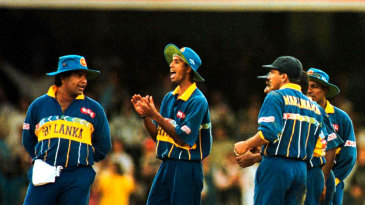