If you had asked me this question at any point other than in the last two years, the answer would have been pretty straightforward - Aravinda de Silva's knock in the 1996 World Cup final, or even the one in the semi-final against India.

But now my answer simply has to change, because there's one innings that will stay with me for the rest of my life, one that I was privileged to see first-hand.

I'm an opener, and as such, my role is mainly to set up an innings. It's rare that we get to experience the thrill of winning a game for our team, seeing it through to its conclusion. But it's what you always dream of doing as a kid growing up. So watching Kusal, it was almost as if I was living vicariously through him.

Of course, what makes it even more special was that I was a part of that dressing room. My first game as captain in fact. Going into the game, not many people gave us a chance, and before Kusal's heroics the mood was pretty low. Not that we had given up - there's always some hope - but it was more fanciful than anything else.

I've watched that knock back a few times now and what strikes me the most was just how in control he seemed, and how he evolved his innings to match the situation. From playing percentage cricket and simply turning over the strike, to taking a few more calculated risks when wickets began to fall.

When there are guys like Dale Steyn, Kagiso Rabada and Duanne Olivier coming at you, you also need to find any edge you can get. So Kusal was clever in how he used the conditions. The Kingsmead Oval is notoriously windy, and the South Africans were swinging the ball quite a bit, but he was very aware of the wind direction and so he made sure that he more often than not played strokes with it, rather than against it. This level of clarity and calculation is rarely seen - he was in the zone, focused.

In fact, when we were sending messages out to the middle as the target was getting closer, we never said a word to Kusal. It was all words of encouragement and advice to Vishwa [Fernando] at the other end - we were praying he would hold on.

Getting into a frame of mind where you can tune out everything and play as close to your natural game as possible, especially in such a tense environment, takes an incredible amount of mental strength. But on that day everything he tried came off. Lt me tell you, as a batsman, those days are like gold dust.

Which is why Kusal's innings was so special: everything about that knock was straight out of a batsman's fantasy. Seeing out a record chase, shielding the tail, facing fearsome fast bowling in alien, overcast conditions - the quintessential one-man show against all conceivable odds. What more could you ask for? 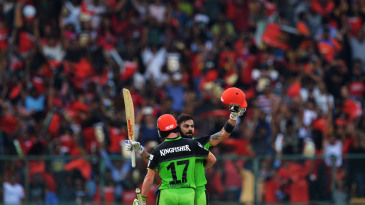