How the IPL franchises spent their money in the auction

Were keeper-batters more in demand than allrounders? Oldies better than newbies? We make sense of the numbers in this deep dive

Who was the biggest buy at the IPL 2022 auction? If you are a fan of the league, you will know the answer is Ishan Kishan, at Rs 15.25 crore (US$2.02 million approx.) With KL Rahul and Rishabh Pant among the big signings ahead of the auction, were wicketkeeper-batters in high demand for this season? Which other categories of players have seen a rise in their earnings? Is age or experience a factor? Which country's players will earn the most on average? We looked at the IPL 2022 auction and retention data to answer these questions and more.

While teams came close to exhausting their purses, their cumulative outlay on salaries for 237 players (204 from the auction and the 33 retained or picked ahead of the auction) for this season is Rs 875.90 crore ($116m), an average of Rs 3.70 crore ($492,000) per player. In 2018, the eight teams spent Rs 604.30 crore (then $95m approximately) on 187 players, an average of Rs 3.23 crore ($504,000) per player. (Note: this data is based on player and salary details right after the auction for both seasons, and does not consider players who pulled out and replacements. Rupee to dollar conversion use the exchange rate prevailing at the time.) There will be 77 overseas players joining 160 Indians in the 2022 IPL - each team has a cap of eight overseas players. The biggest overseas contingent comes from the West Indies, 17 players, while Bangladesh have only one representative in Mustafizur Rahman. Royal Challengers Bangalore have the most players earning over Rs 10 crore (four). Chennai Super Kings and Mumbai Indians each have three Indian players - but none from overseas - earning over Rs 10 crore each. Sunrisers Hyderabad are the only team without an Indian player earning a salary above Rs 10 crore (though they have two overseas players in this bracket). Mumbai, who retained four players, and then made the highest bid at the auction (Rs 15.25 crore) to get back Kishan, spent the most on their top five highest-earning players compared to other teams, while Delhi Capitals and Knight Riders, who also retained four players each, spent less than Rs 50 crore ($6.6m) on their top five earners.

With two new teams in the fray, did the demand for uncapped players go up? 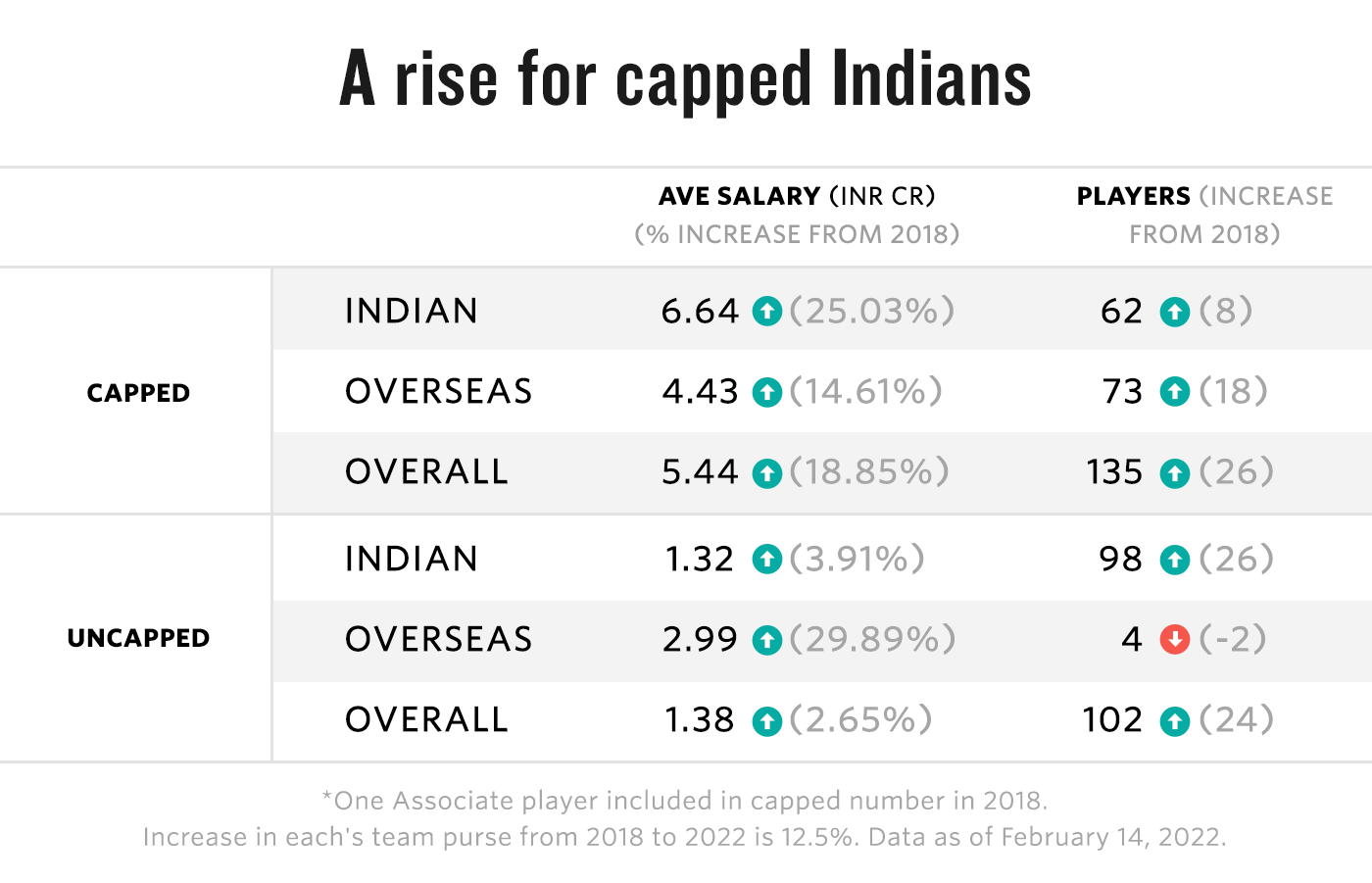 Allrounders have been the biggest beneficiaries of the increased salary cap between the two mega auctions. The average salary of those whose playing role has been denoted as allrounder by the IPL rose to Rs 3.63 crore ($483,000) from Rs 2.81 crore ($439,000) in 2018, an increase of nearly 30%. When it comes to T20-specific skills, those with the experience of handling the death overs (minimum 150 balls bowled in overs 17-20 in T20s in the last three years) will earn an average of nearly Rs 6 crore ($798,000), even higher than the average for wicketkeepers. The better the bowler's economy rate at the death, the higher the average salary. 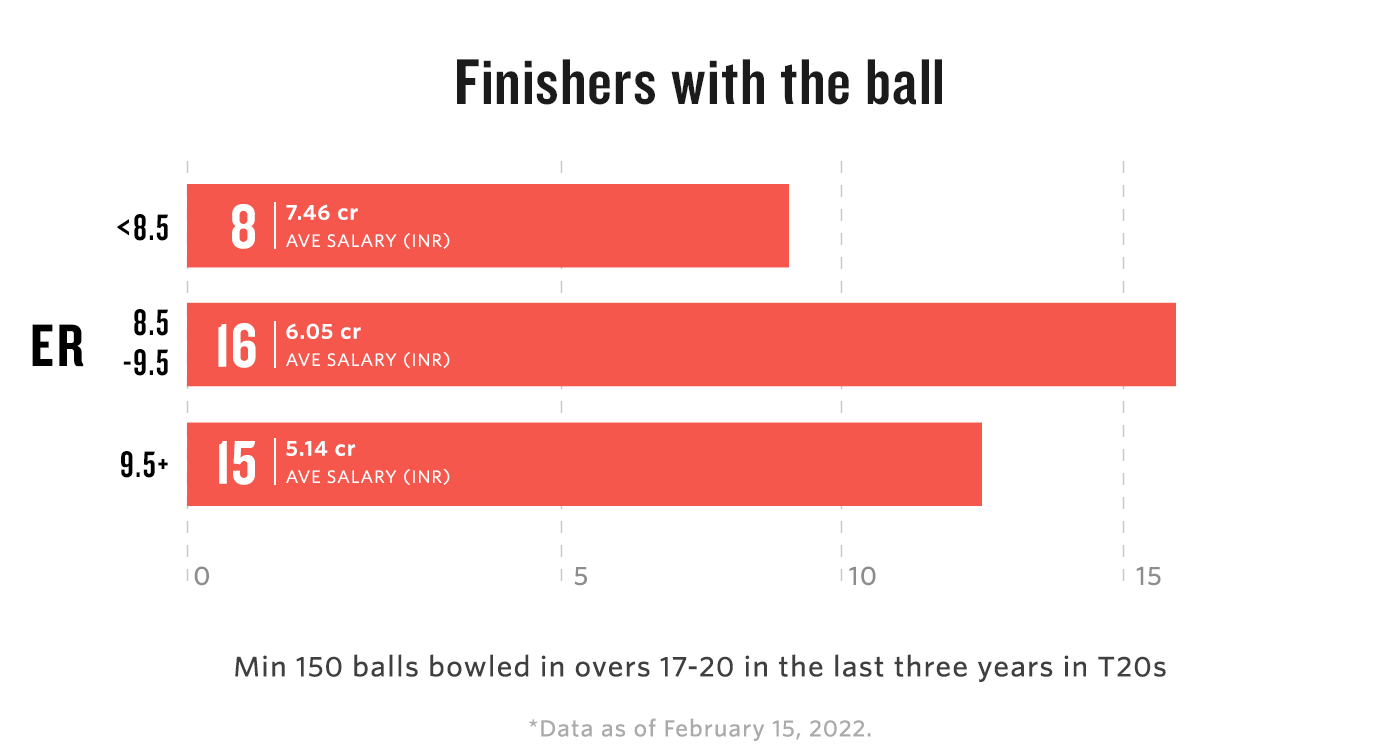 Similarly, the higher a player's T20 batting strike rate, the higher their salary on average. Among the 99 players who meet our cut-off (500 runs at a batting average of 20-plus), there's a difference of over Rs 2 crore ($266,000) in the average earnings for players with a strike rate below 130 (Rs 3.84 crore or $511,000) and those above 130 (Rs 5.91 crore or $786,000). Seventeen of the 99 are in the ten-crore club, and only three (Kane Williamson, Ravindra Jadeja and Shreyas Iyer) have a strike rate below 130. Still, keep in mind that it's not just a player's stats that determine their earnings. Many other factors, including auction dynamics, contribute to how teams determine the right price for a player. 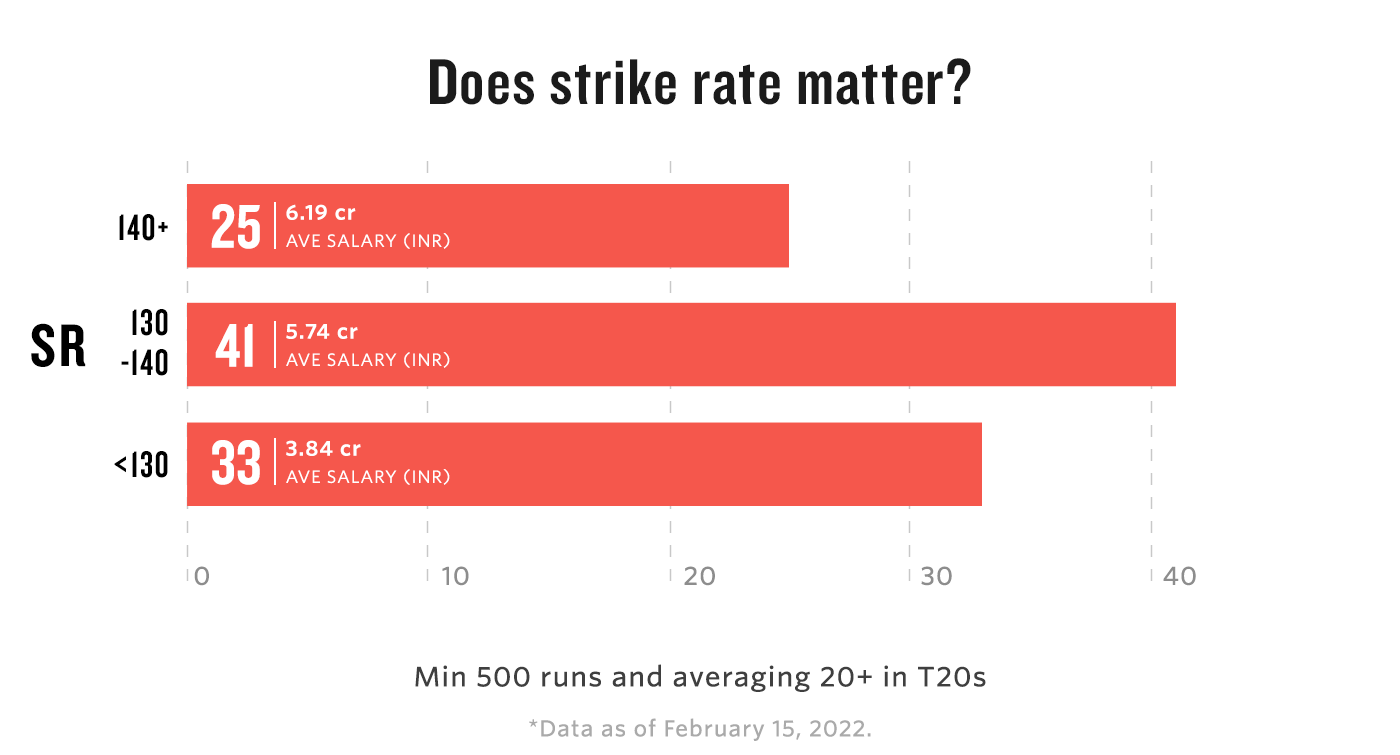 The talk after the 2018 mega auction was about CSK's ageing squad, but the franchise went on to win two titles in the next four seasons. At an average of 28.64 years, CSK's 2022 squad of 25 will be the oldest in the league. But the others are not far behind: Super Giants, Titans, Royal Challengers Bangalore and Rajasthan Royals are in the 27-28 range, while Mumbai and Sunrisers average below the age of 26. Eleven of the 26 from the ten-crore club were in the 30-35 age-group, and ten were between 25 and 30. 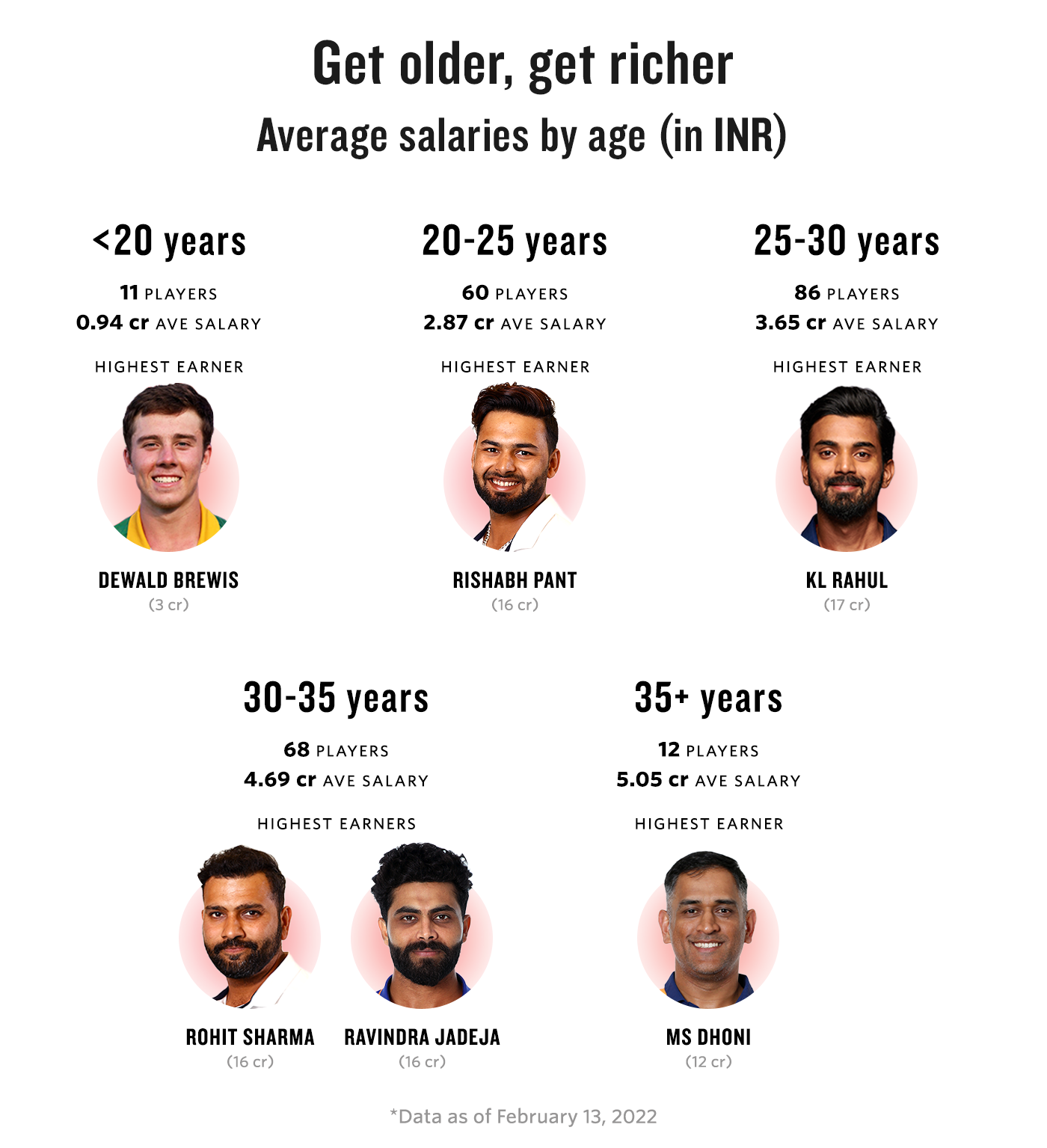 The more T20 experience a player has, the higher their earnings on average in the 2022 IPL. (This data does not include players who weren't picked at the auction, where plenty of experienced T20 and IPL stars missed out.) Seventy-two players who haven't played in the IPL before were bought at this auction; among the uncapped IPL players, West Indian allrounders Romario Shepherd (Rs 7.75 crore, or $1.03m) and Odean Smith (Rs 6 crore) and Indian fast bowler Yash Dayal (Rs 3.2 crore, or $426,000) were the top three buys. While only 26 out of the 237 have more than 100 caps (which would roughly equate to seven IPL seasons of experience), the highest average salary is for the 34 in the 50-100 matches range of experience, suggesting that teams are also looking at stars who can form their core for the next few years. Mathew Varghese is a social media manager, Shiva Jayaraman is a senior stats analyst, Sampath Bandarupalli is a statistician, and Kshiraja K is a designer at ESPNcricinfo IPL 2022 big questions - Part II: Will Wade open for Titans? Where do Sunrisers slot in Pooran?

Also, do Lucknow Super Giants have enough back-up for their first XI? Every mega IPL auction reveals a bit more about how franchises plan when building a team. It was no different this time A look at the rich lists, across player categories, at the end of two days of frenetic auctioning