A player who refused to be anything but himself on a cricket ground or off it, Shane Warne's life was the stuff of legend Mad lad, larrikin, maverick, jokester - with the passing of Shane Warne, cricket has lost a lot of its colour. Perhaps no other cricketer has lived as loudly and proudly in the public eye as Warne did; few others transcended the sport like he did. Warne was everywhere, in everything, and his life off the field was as riveting as he was on the pitch.

How colourful was Warne's life that after multiple autobiographies and documentaries, the whole story still hadn't been told? Colourful enough to inspire a tell-all musical comedy, endorsed by Warne himself. Australian comic Eddie Perfect's Shane Warne: the Musical took a satirical dig at the spinner's life, and if Warne was upset by it, he never said a word. In the Guardian, Gideon Haigh wrote about the play:

"For one lengthy dream sequence, Warne/Perfect is attired only in a pair of Playboy underpants; two scenes also call for him to listen to his wife belt out songs mourning their disintegrating marriage, and when the lights rose again his seat was empty. But this was simply so that he could saunter onto the stage at the curtain call, and express his general satisfaction. He complained only: 'I reckon I look better in my jocks than Eddie does.'" Eddie Perfect plays Warne in the musical in 2008 © Getty Images

Warne's lifelong smoking habit is well documented - last year in the Uncensored podcast, Michael Clarke spoke about how Warne's ritualistic cigarette before taking the field was his method of coping with pressure and putting himself in game mode. In 1999, Warne signed an A$200,000 sponsorship deal with Nicorette, makers of nicotine patches, to give up his 40-a-day habit for four months. With five days to go for the sponsorship to end, Warne was caught smoking in a Barbados bar while on a tour of the West Indies. He said it was a one-off relapse and blamed it on the stress of the West Indies tour. In 2010, English actress Elizabeth Hurley sent the tabloids into a tizzy when she confirmed she was seeing Warne, shortly after the two had been snapped kissing in London. Warne and Hurley met at the races in 2010 - Warne was an avid racegoer and even co-owned a racehorse - and were engaged the next year after he proposed to her "on impulse" on a yacht. They lived together for two years before calling off their engagement in 2013.

But Warne was happy to go wherever his celebrity took him, even before he met Hurley. He made an appearance on beloved Australian soap Neighbours in 2006. He memorably played a Shane Warne impersonator on Australian sitcom Kath & Kim in 2007, and joined reality show I'm a Celebrity, Get Me Out of Here in 2016, where for one challenge he had to stick his head in a tank of snakes, and came away bitten by an anaconda. Warne was as big a fan of music as musicians were of him - he counted among his friends names as diverse as Coldplay's Chris Martin, Kylie Minogue, and Ed Sheeran. Warne said he was particularly close to Martin, who he became fast friends with after a chance meeting in an elevator during the 2001 Ashes. In 2016, he joined Coldplay on stage to do a harmonica solo on the song "Don't Panic" when the band played in Melbourne. Tim Paine's 2021 scandal had echoes of 2000, when Warne was stripped of the Australia vice-captaincy after it emerged that he'd left explicit messages on the mobile phone of a nurse he met at a nightclub. Unlike Paine, though, Warne wasn't about to disappear from the public eye. Instead, he signed an endorsement deal to be the voice of a call-hold message service company, Messages on Hold. His tagline? "Trust me with this recommendation - I know a thing or two about spin." Warne's longest and hardest battle perhaps was with his weight, and his struggles were unforgivingly documented in minute detail - reaching a nadir in his one-year ban during the 2003 World Cup after he tested positive for a banned substance. His love of junk food produced its own trove of stories - he famously asked for a crate of baked beans and tinned spaghetti to be flown in on his tour of India in 1998, after being unable to stomach the local food - and he would fight the battle of the bulge right until the end. His last Instagram post said he was taking yet another stab at a long-lost beach bod. The Australian Open is better with ice cream © Getty Images

Warne was one of the first cricketers to openly talk about his hair loss, and like all things Warne, he turned it into a business opportunity. His hair-regrowth adventures were exhaustively documented, and his endorsement of hair-treatment brand Advanced Hair Studios landed him in trouble when a media watchdog pulled up the campaign for misleading the public about the effectiveness of the treatments. Toupee or not toupee, that is the question: Warne and his hair-raising adventures Torsten Blackwood / © AFP

In 2006, Warne was embroiled in yet another sex scandal when a video of him cavorting in his underpants with models leaked online. Warne leaned into this controversy as well, marketing his own line of underwear, "Spinners", in 2010. How many lives did Warne have in sport? It's telling of the legacy of the man that he mourned on golf pages, on poker sites, on F1 blogs and AFL websites, on tennis forums - each with their own little stories of how Warne touched their sport. He was a dab hand at tennis and a devoted fan - he was a familiar face at Wimbledon and the Australian open every year. He taught Novak Djokovic a thing or two about bowling, but he wasn't sparing in his criticism when Djokovic's Covid-19 drama unfolded. Djokovic learns to roll his arm over © Getty Images

Warne was also a regular in the F1 paddock, and at a promotional event in 2009 was smashed for a few sixes by Lewis Hamilton. Poker was Warne's other great passion. What grew from card games between friends and team-mates became a second career of sorts for Warne, who travelled the world competing in tournaments, including the World Series of Poker in Las Vegas. He was signed up by 888poker in 2008 to represent the brand at tournaments, and competed for them till 2015. He had immense skill, charisma and mystique, a terrific cricket brain, and he was an icon like few cricket has seen 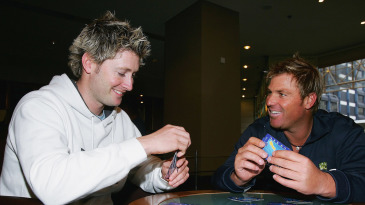 Shane Warne: the showman who could do hard graft