Swing when you're winning

Nearly 20 years to the day since his international debut, a look back at the fast bowler's remarkable career, in pictures Anderson enjoyed his 40th birthday with a cuppa, a sit-down and ten wickets in three Tests against South Africa at home this year © Getty Images

Nearly 20 years to the day he first bowled a ball in international cricket, 40-year-old James Anderson has now played in 177 Tests and counting, second only to Sachin Tendulkar for most Test caps. He's the only bowler - and scarcely believably, a fast bowler - among the top eight players on that list (compatriot Stuart Broad brings up ninth place). He has an incredible 675 Test wickets, and more to come.

Anderson had played just one season of the County Championship, for Lancashire, when he was called up to the England ODI squad to Australia in 2002-03. He took two wickets in each of five games on the trot and made it to the World Cup in South Africa. Anderson made his debut, against Australia as a tearaway quick, a far cry from the craftsman he would become later Tom Shaw / © Getty Images

In the 2003 World Cup, he demolished Pakistan's top order with 4 for 29. He was the side's leading wicket-taker of the tournament, with ten wickets at 22.50. He debuted in Tests the next summer in sensational fashion - frosted tips, yes, but also a five-wicket haul on debut, the first for England since Dominic Cork's in 1995. So much in ascendance was Anderson's star, he was invited to meet Michael Schumacher at the 2003 British Grand Prix, but needed to decline because he was to attend a birthday party at his parents'. Ferrari sent a helicopter to pick him up so he could be at both events. Against South Africa that summer, he struggled with line and length - though he did take seven wickets at Trent Bridge. A few lean years followed, while Anderson chopped and changed his action to mitigate injury, and found himself sidelined from the England squad. He roared back in 2008 with a Player-of-the-Match performance against New Zealand, at Trent Bridge again, knocking over their first seven wickets for 43 runs, then picking up two more in the follow-on. In his 29th Test, Anderson rapped Jacques Kallis on the pads with an inswinger to pick up his 100th Test wicket, at The Oval in 2008. Two thousand and ten was Jimmy Anderson's year. After picking up 23 wickets in four Tests against Pakistan at home, he put his away demons to rest by taking 24 in the Ashes, in the process landing his 200th Test wicket, that of Peter Siddle, who went on to be a regular bunny. Anderson's first 100 wickets took more than five years; his next 100 came in a little over two. With 57 Test wickets in the space of 12 months, 2010 was Anderson's most prolific year Tony Ashby / © AFP/Getty Images

And the milestones kept coming. In 2013 he became the fourth England bowler to go past 300 wickets, when he dismissed Peter Fulton for 2 at Lord's, the venue of his first Test wicket. He had a more chastening time of it in the 2013-14 Ashes in Australia, where his 14 wickets did little to change the course of England's 5-0 whitewash. The series is remembered for Anderson's stoush with Michael Clarke, when Anderson was threatened with a "broken f***** arm" during the Brisbane Test. Shane Warne later claimed Clarke was provoked by Anderson threatening to punch George Bailey in the face. Armed and dangerous: Clarke and Anderson have a little chat © Getty Images

Anderson followed that little dust-up with another one back home, this time against Ravindra Jadeja. Walking back for lunch on the second day of the first Test, at Nottingham, words, and more, were supposedly exchanged between the two. Anderson played the series with the threat of a ban hanging over him, but in the end the matter fizzled out. Jadeja and Anderson's altercation spilled over into the rest of the Test series, and perhaps served as motivation for Anderson's 25 © Getty Images

Though he took 269 ODI wickets in 194 matches, and remains England's top wicket-taker in the format, Anderson played his final ODI at the 2015 World Cup, calling time after England's ignominious exit in the group stage. Which he achieved rather neatly in his 100th Test, when, in Antigua, he went past Ian Botham's 383 wickets, then the most by an England bowler. 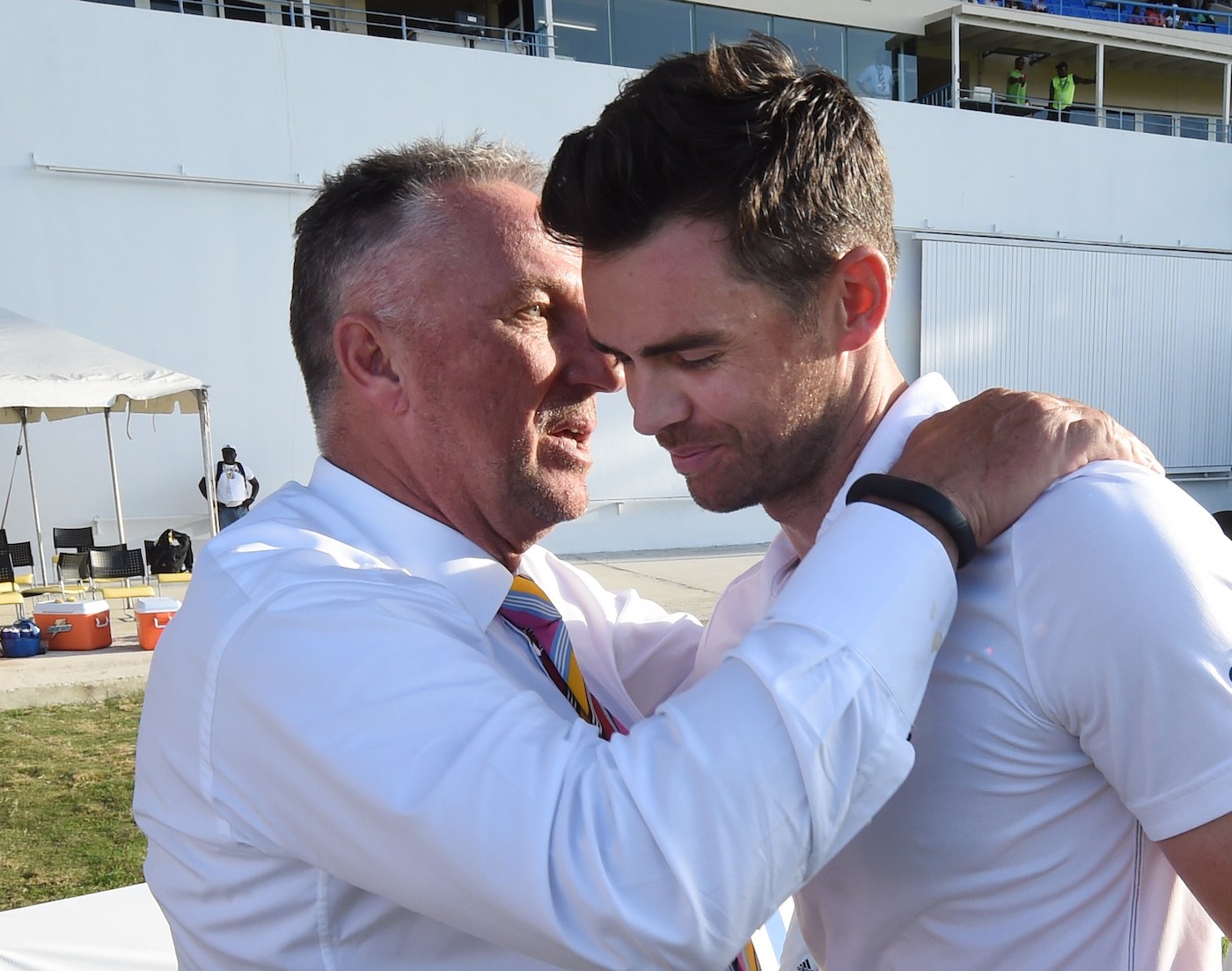 "I think he'll go on for another two or three years," Botham said confidently after Anderson overtook his record Mark Ralston / © AFP/Getty Images

And victim No. 400 wasn't far away. Martin Guptill fell for an eight-ball duck at Headingley to give Anderson the milestone in a drawn Test series against New Zealand. In September 2017, Anderson became the first England bowler, and sixth overall, to 500 wickets when he castled Kraigg Brathwaite at Lord's. His bowling partner Stuart Broad would join him three years later in the 500 club, also with the wicket of Brathwaite. Brathwaite, incidentally, has been the milestone wicket for three different bowlers - 500th for Anderson and Broad, and 200th for Trent Boult Sarah Ansell / © Getty Images

In the same Test, Anderson also set a new career-best mark: 7 for 42. Can't stop, won't stop? Azhar Ali became unlucky batter No. 600 on Anderson's list, while Anderson himself became the first fast bowler to the mark, in Southampton in August 2020. 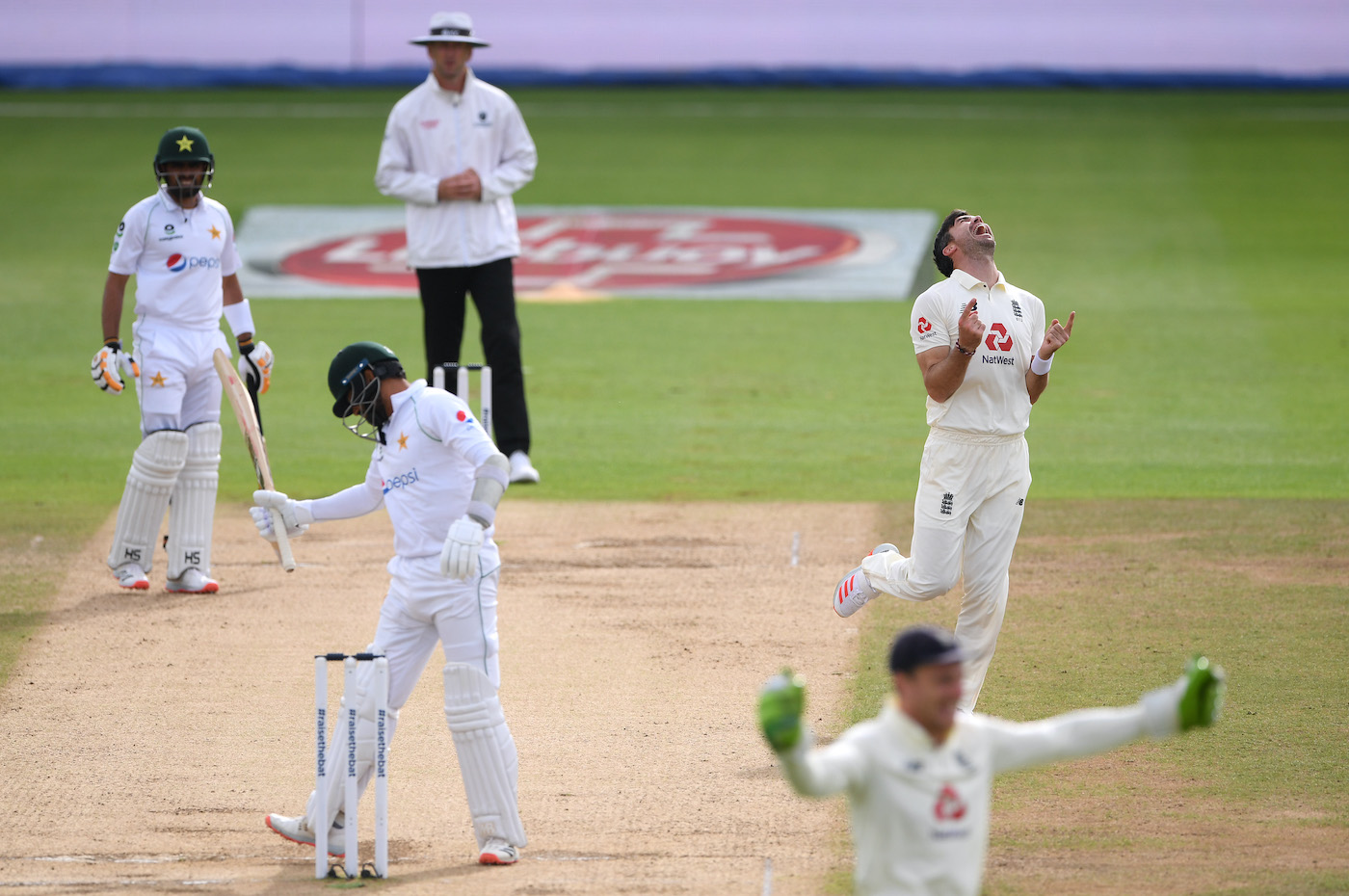 Anderson had already surpassed Anil Kumble's 619 dismissals to become the third most prolific bowler of all time, and later he would go past Glenn McGrath 949 wickets to become the top fast-bowling wicket-taker across all international formats. Below, Tom Latham misjudges a leave to be clean bowled by Anderson and become his 650th wicket. Twenty years and 675 wickets into his career, Anderson's list of bunnies speaks to his quality as a fast bowler. With the exception of Siddle, his list is crowded with top-order batters - Cheteshwar Pujara (dismissed 12 times), David Warner (10), Michael Clarke (9), Sachin Tendulkar (9), Steven Smith (8), and Virat Kohli, Jacques Kallis and Kumar Sangakkara (7 each). James Anderson: No-one else 'will be stupid enough' to play Test cricket past 40 As the England quick celebrates a milestone birthday, S Rajesh looks at how incredibly well he's aged as a bowler 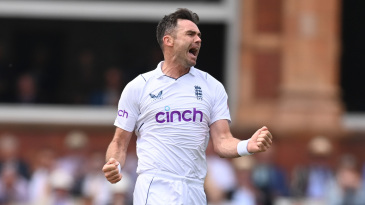 Which batter has Anderson dismissed the most in Test cricket?

As Anderson turns 40, find out how well you know his career