At the end of 1979 West Indies were the best cricket side in the world. On a tour of Australia they had beaten the hosts there for the first time. But when they headed to New Zealand the three-Test series was dogged by ill will, accusations of cheating and terrible sportsmanship.

Fred Goodall (umpire): There were adverts on the TV of Joel Garner saying "We've beat the Aussies, man, and now were gonna beat you".

Howarth: They were supposed to be unbeatable - there was no contest. They had been through a hard trip of Australia, they were a little blasé, a bit homesick. They were expecting a quick jaunt and a few wins inside three days. We caught them on the hop.

Clive Lloyd (West Indies captain): We were jaded and Viv Richards had gone home with a sore back.

Don Cameron (New Zealand cricket journalist): New Zealand won a one-day international and then, before the first Test at Dunedin, it was like MI5 spy stuff with all the misinformation flying around. New Zealand picked an extra spinner, trying to kid West Indies that the pitch would turn, but Dunedin was sharp and quick and [Richard] Hadlee was brilliant. He got a lot of lbws.

Hadlee got seven lbws plus another four wickets in the match. There were 12 leg-before decisions in all - a record for any Test at the time.

Goodall: West Indies got very upset. Hadlee had three lbws in the first session. I gave all of them.

Howarth: They couldn't complain. If you walk in front of your stumps at Dunedin, you'll get given out.

Cameron: The umpiring was indifferent. The pitch at Dunedin kept low but West Indies thought they were getting too far forward for the umpires to be sure.

Goodall: I'd umpired county games in England. We weren't professional, though. I was a schoolteacher.

The atmosphere worsened as the Test went on. It became desperate when Michael Holding thought he had John Parker caught behind on the second day. When the umpire John Hastie gave Parker not out, Holding kicked down the batsman's stumps.

Colin Croft (West Indies): The ball didn't brush the glove - it tore the glove off. Deryck Murray took it in front of first slip. Parker was on his way to the pavilion when he was given not out.

Lloyd: Michael Holding is an honest guy. If he was so incensed that he would do that it just shows you how bad these guys were.

Goodall: After Holding kicked down the stumps, I asked Clive Lloyd to control his players. As I was doing so, Lawrence Rowe at second slip said to me: "You're nothing but a pack of cheats."

Croft: The photo of Holding is the best sports picture I've seen. He should have been signed up by Manchester United on the strength of it.

Cameron: The photo was taken by a guy from a different town who wasn't working for the local paper, so it didn't appear for a few days. Then it was sold to Fleet Street and everyone saw it. Things really got nasty after that.

Needing 104 to win in the last innings, New Zealand got home with a leg bye, nine wickets down. In the Wisden Book of Test Cricket Bill Frindall noted that the result "precipitated much truculent behaviour from the West Indies team and management".

Cameron: Hell, they were really bolshy. By Christchurch and the start of the second Test it was worse. There was a lot of ridiculous nonsense. A local radio station composed a satirical calypso ridiculing West Indies.

Goodall: Things went OK until the third day when Geoff Howarth gloved a catch to Murray. I saw nothing and heard nothing but apparently there was a brush of the glove.

Howarth: I leant back to a short ball and got a thumb on it. It was one of those ones where everyone behind the wicket knew it was out but no one in front could tell. That was the straw that broke the camel's back for West Indies.

Goodall: The other umpire came up to me and said: "I've got news for you and it's all bad. West Indies aren't coming out." They wanted me changed there and then. But the New Zealand board stuck up for me.

West Indies unlocked the dressing-room door and came out 12 minutes overdue. Their arrival on the pitch marked the beginning of an extraordinary passage of play.

Goodall: That final session took the game into disrepute. West Indies let the ball go to the boundary and they dropped catches accidentally on purpose.

There was a rest day after the third day's play. Relations were so poor that West Indies emptied their dressing-room and seemed set to abandon the tour.

Cameron: I was in the same hotel as the West Indies players and I got on well with Desmond Haynes. In the evening I went into the players' room and they were all there eating fried chicken. "Why the party?" I asked Dessie. "Oh, we're going home," he said. Straightaway I phoned Jeff Stollmeyer, head of the West Indies board in the Caribbean, and asked him for a comment. "It won't happen," he said. "The manager [Willy Rodriguez] will be told that they'll be carrying on."

Stollmeyer was right. The teams returned for the fourth day.

Goodall: By this stage I was having a running battle with Colin Croft. He was bowling very wide of the crease and was being no-balled for his front foot but also for being outside the return crease. "Go back to teaching," he'd say, "you don't know the rules".

Croft: I admit that it wasn't proper international cricket behaviour. Some of our demeanour was not good.

Cameron: It was an awful bloody atmosphere and West Indies gave up playing. Then there were more dodgy decisions.

Goodall: Hadlee slashed at a bouncer from Croft. Everyone appealed and I thought I'd made a good decision giving him not out. Only years later did Hadlee tell me he'd got an edge on it.

Howarth: Fred was a stick-in-the-mud, officious, but he was our top umpire. He wasn't frightened to make a decision; neither was he a cheat. He was just out of his depth.

Goodall: Croft then flicked the bails off with his fingers. Jeremy Coney was the non-striker and he said to me: "Whatever you do, Fred, don't pick those up. I'll do it." The next ball Colin Croft carried on straight through his run-up and cannoned into me. I was knocked sideways.

Lloyd: I had a word with Crofty. This had happened once before with his close run-up. He'd knocked Bill Alley during a game for Lancashire. He ran in very straight then broke away.

Croft: In the heat of the moment they thought I did it on purpose. I did not do it purposely. If Fred Goodall was in Hollywood, he'd have picked up an Oscar. I'm six foot six and 230 pounds. If I'd meant to hit him, he wouldn't have got up. It's crap that I barged him deliberately.

Goodall: I had to walk over to Lloyd at slip and I said: "I've taken verbal abuse as an umpire but I've never been struck before. You sort this out now." But he let Croft stay on.

Howarth: Croft tried to pretend he'd lost his run-up. It was disgraceful. He should have been banned for life. It was because it was 12,000 miles away in little old New Zealand that the authorities turned a blind eye.

The tour had reached a new low. The second Test ended in a draw, as did the third. On the last day several West Indians had to be dissuaded from taking early flights home. The rancour lasted for years - especially as Fred Goodall was alleged to have made racist remarks about the tourists at an after-dinner speech.

Goodall: They could, I suppose, interpret what I said as a taunt. It was a flippant remark that could have been taken the wrong way and some people decided it was racist. When Vivian Richards captained the side in 1987, he wouldn't speak to me except to say: "We'll teach you to make fun of our people." It was very unpleasant.

Cameron: Goodall made several speaking engagements around the country after the Test series and made some biting and racial criticism of the West Indians. Viv Richards was aware of the angst even before he returned to New Zealand as captain of the next touring side.

Lloyd: They were just bad umpires but we should not have behaved in that manner. I think if I'd had my time over again I'd have handled it differently. I regret it even until this day, that things went so far.

Goodall: I eventually got a photocopy of an apology that had been sent to the New Zealand board from West Indies. Would I ever meet Colin Croft again? Not on your nelly.

Croft: Aggression is different from passion. We were passionate. We never had any inclination to destroy.

This article was first published in the April issue of The Wisden Cricketer.
Click here for further details. 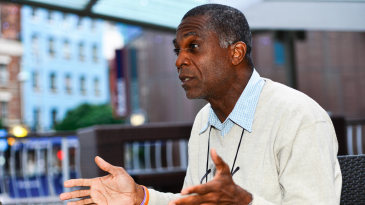 'There's too much lip service about the sanctity of Test cricket'

Michael Holding on his regrets over West Indies' behaviour in New Zealand in 1980, why Mohammad Amir deserves a second chance, and how crazy workloads are killing cricket