A little over a year after the famous tied Test in Madras, the same teams played out a lesser classic - an equally tight ODI - at the same venue

India had eight wickets in hand and required just about 70 runs off the last 15 overs to win their World Cup opener. But they were up against the Aussies, who had parked themselves in Madras a full nine days before the game to train. When it came down to two needed off the last ball, the parallels with the tied Test, played at the same ground just over a year before, were unmistakable. Everyone in the cauldron of Chepauk held their breath as Steve "The Iceman" Waugh began his run-up ... 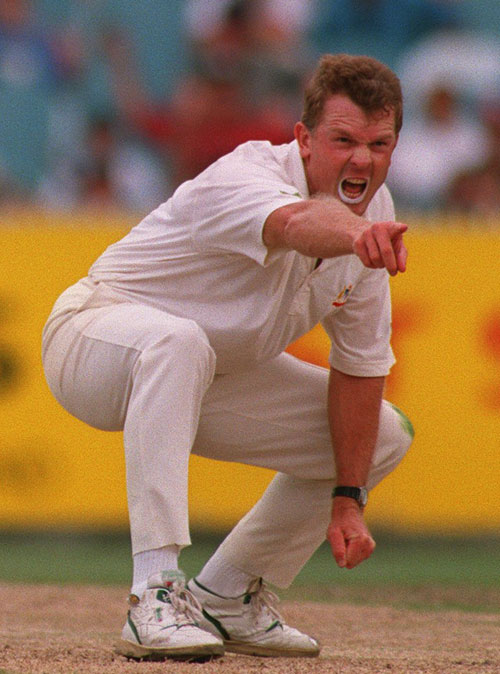 On a hot day in Madras, Craig McDermott got his "gorilla teeth" out and turned the game Australia's way © Getty Images

Memories of the tied Test were strong in the players' minds

Dean Jones, Australia top-order batsman Having played the tied Test just over a year earlier had helped us to get used to the conditions. We learned how to play in the heat, and we actually had an affection for Madras because of it.

Kiran More, India wicketkeeper For us there were not many changes from the team that played that Test, so the memory was fresh, and in the end it came close to finishing on similar lines. We had had good series in Australia and England in the 1985-86 period, and we were the favourites here, playing on home ground.

PR Mansingh, India team manager We were definitely under pressure because we were the holders and we were playing at home. The 1983 World Cup win was unexpected, where nobody gave us a chance, but in 1987 there were a lot of expectations, and due to that there was pressure.

Australia made a solid start, putting on 110 for the first wicket

Geoff Marsh, Australia opening batsman It was important to bat first and create pressure. For that, one of us had to stay there, which I did. We built some good partnerships even though we chose to play safe in the early part of the day when there was some movement. We batted well early on, and rotated strike well in the middle before going for the final dash.

Jones One of the rules that was inscribed on our kitbags was: "To lose patience is to lose the battle". We knew that we needed not only to hit the fours, but also work harder at taking singles and running between wickets. We tried to make the opposition fielding look ragged, and that worked.

Marsh was always very pumped up for the first half of a tour. And the pair of him and Boonie [David Boon] were best mates and complemented each other very well. Boonie hit more on the leg side, and Marsh played through the covers.

More It was a hot day and the ball didn't do much. Boon and Marsh never looked like getting out. Marsh was the grafting kind, picking his ones and twos, very strong square on the off side; and Boon was one of the shrewdest batsmen around.

A shot by Jones off Maninder Singh that looked as if it had gone over the ropes was signalled four. Later, during the lunch break a correction was made

Jones I went down the pitch and hit Maninder over the straightish mid-off boundary. Ravi [Shastri] leaped but missed, and the ball carried over the rope by at least a metre. Dickie [Bird] asked Ravi, who signalled it as a four. I had a word with Dickie, and he told me we'd talk about it after the innings. Alan Crompton, our manager, didn't agree with the decision and had a talk with the umpires, who approached Kapil Dev. It was declared a six and two runs were added to our total.

Simpson I was very disappointed with Ravi over that. We were not very far from where that ball crossed the boundary. There was no doubt at all that it was a six.

More Dean liked to step out, and he was a good player of spin. He had shown ample evidence of that in the tied Test. That shot which he stepped out and hit off Maninder was outstanding. But from behind the wicket I was sure it was not a six.

India needed a good start, and it was Sunil Gavaskar, usually slow off the blocks, who led the assault

Mansingh Before they went in to chase, Kapil just told the team not to be complacent, and to play their natural game.

Gavaskar had made up his mind by then to retire after the World Cup. He wanted to go out on a high, so he was in an aggressive mood right from the word go. He and Chikka [Krishnamachari Srikkanth] gave us a really good start.

Jones It was surprising to see Sunny take the lead, as he was not such a great one-day player. But on that day he set the tempo and got into a mood, and a whole wave of confidence and aggression lifted the Indian team. They honestly thought, being World Cup champions, "This is our turf and we are going to show them who's the boss." The formidable opening partnership showed that. At 202 for 2 with about 15 overs to go, India looked set to start their defence of the title with a win, but then came Craig McDermott

Marsh They obviously had a plan which they were holding onto for a while, but they just lost too many wickets in quick succession, and we managed to hold together a bit better.

Jones McDermott was a racehorse - once he got his confidence, he would grow an extra leg and become stronger and bigger and better. That's what happened in that second spell. All of a sudden he started showing his "gorilla teeth", especially when he got a wicket. And those teeth were starting to show some bite.

The pitch had slowed down due to the wear and tear, and both Steve Waugh and Simon O'Donnell had done a fantastic job to keep the Indian run-rate in control by bowling their slow legbreaks and smart changes of pace. When McDermott came back, he realised he could bowl disguised offspinners to good effect. As the pressure started to build, the Indian batsmen buckled.

More I thought we could have easily made it. I was middling the ball well and had dispatched Steve Waugh on the on side for two boundaries. But two or three of our lower-order players got out unnecessarily.

McDermott's spell was the turning point. We had the match in our hands when he came back and took crucial wickets. He did bowl well, but we collapsed, and there were two run-outs as well. They were the best fielding side in the tournament and they knew how to dry up the runs.

Eight runs were needed off the last over, by Steve Waugh. Manoj Prabhakar ran himself out

Marsh We had put so much emphasis on our fielding. We knew every single run we saved was going to create pressure. It wasn't just the bowling and the batting - our fielding made a difference.

Jones We were very good at attacking teams and defending well in the field. I got rid of [Roger] Binny by throwing from a side-on position. That was just the sort of break we needed to put pressure on India.

More [Allan] Border used to position himself at short extra-cover and short midwicket. That would always put you in two minds. Prabhakar played a shot to the area where Border was stationed and just took off when there was no run.

Mansingh The dressing room was nervous. Everyone's minds immediately went back a year to the tied Test where it was Maninder, once again, the last man with the team's fate in his hands.

Jones We started to think, "God, we might have a tie here again." It was a feeling of "been there, done that". We had bowled last in that game, and we didn't panic here in a similar situation. When Maninder took guard against Waugh with two runs to win, all I was thinking was, "Hit the ball in the air to me." And he got cleaned up instead.

More I knew it was over. It was a disappointing finish, just like the tied Test.

Simpson In the end the six did make the difference. It may have seemed like good fortune for us, but it was right.

Nagraj Gollapudi is an assistant editor at Cricinfo. This article was first published in the print edition of Cricinfo Magazine