We had played nine lead-up matches going into the first Test. We lost one game, won another and drew the rest. Most of our frontline batsmen were in form, especially Polly Umrigar; and GS Ramchand and Ghulam Ahmed were outstanding with the ball. Morale was reasonably high.

It was the great Freddie Trueman's debut Test and he shared the new ball with Alec Bedser. Trueman was really quick and Bedser's legcutters were coming off the track like legbreaks. We were soon three down for just 42.

Then Vijay Manjrekar and Vijay Hazare put on 222 for the fourth wicket. Manjrekar was brilliant. It was just his third Test but he showed total command against both pace and spin to score a hundred. He hit all round the wicket and stepped out to the slow bowlers. Hazare, on the other hand, was correct and solid. But once they were separated, three wickets fell quickly. Jim Laker mopped up the tail for very little and we were all out for a little under 300.

England's batting was formidable. They had the likes of Len Hutton, Peter May, Denis Compton and Tom Graveney.

Ghulam Ahmed gave us a good start when he dismissed Hutton, Reg Simpson and Compton with his fastish offbreaks. Then May was bowled by Sadhu Shinde and England were in trouble at 92 for 4.

But Graveney added 90 for the fifth wicket with Allan Watkins. They were about 200 for 5 at one point and we still thought we had a chance to take the lead, but Godfrey Evans and Roly Jenkins took them to 334.

They had a lead, but not a large one, but it turned out to be good enough to inflict an innings defeat on us. What happened in our second innings was unprecedented in Test cricket.

Hazare had said that our batting order would remain unchanged in the second innings. I had batted at No. 8 in the first, so I went out onto the balcony with my blazer on. But as the England team went out to field, I received a summons from the captain, who was lying on the massage table. I was told I was to bat at No. 3. By the time I had hurriedly strapped on my pads, we had lost a wicket. Roy had tried to hook a Trueman bouncer that came on quicker than expected and top-edged the ball.

I walked out and survived that over, but at the other end Datta Gaekwad followed an outswinger and edged the ball low to Laker at gully. It was 0 for 2.

I played the first three balls of Trueman's second over. The fourth ball was an inswinger, which I spotted early. The ball pitched on the middle stump. I thought that if it swung more than I expected, it would go past my leg stump and if it came in the way I thought it would, I could play it down. But the ball did not swing at all. It went through straight after pitching and hit my middle stump. My error of judgment was to play from the crease instead of going back.

I crossed Manjrekar on my way in and his pale face is still vivid in my memory. He looked at me and muttered in Marathi: "Mala bakra banaola" (I've been made the sacrificial goat). Hazare wanted to avoided the intense pressure of going in at 0 for 3 and had asked Manjrekar to bat ahead of him. It was an act of self-preservation that should never have been allowed to happen.

"I crossed Manjrekar on my way in and his pale face is still vivid in my memory. He looked at me and muttered in Marathi: 'Mala bakra banaola' (I've been made the sacrificial goat). Hazare wanted to avoided the intense pressure of going in at 0 for 3"

Manjrekar's state of mind aggravated India's misery. He was out first ball, bowled by Trueman, even as I was taking my pads off. India were now 0 for 4, and with one ball to go in the over, Trueman was on a hat-trick.

India just about averted being 0 for 5, and the hat-trick, after Hazare played half-cock forward and got an inner edge; the ball missed the leg stump by a whisker.

When we lost Polly at 26, the danger of an innings defeat still loomed large, but Hazare and Dattu Phadkar both made fifties somehow. Still, once the stand was broken, the end was swift. The last five wickets crashed for some 30 runs, with the seventh, eighth and ninth all falling at 143.

England won by seven wickets. It was a debacle that shook the Indian camp. The manager, Pankaj Gupta, and Hazare spoke to the BCCI and got Vinoo Mankad inducted into the side for the rest of the series.

It was exactly 53 years before, in 1899, in this very month and at this very venue, that Test cricket had witnessed the bizarre instance of Australia losing the first four second innings wickets to fall at the same score - 34. But 0 for 4 remains unique in 125 years of Test history.

Madhav Mantri kept wicket for India in the early 1950s. He was later national selector, Indian team manager, BCCI treasurer, and president of the Mumbai Cricket Association. He was speaking to H Natarajan. This article was first published in Wisden Asia Cricket magazine 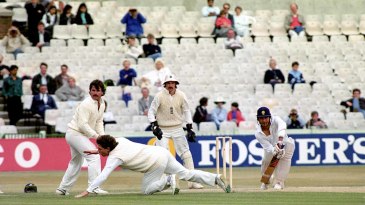 India in England - the greatest hits 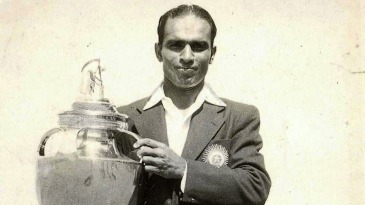