The World XI were sinking without a trace. Then along came Sir Garry

After South Africa's tour of Australia was cancelled in the wake of the controversy over apartheid, a world team was scrambled together to play a series of five Tests and three one-dayers. Star-studded the line up may have been, with the likes of the Pollocks, Sunil Gavaskar, Tony Greig, Zaheer Abbas and Bishan Bedi in the ranks, but Ian Chappell's Australia were a tough side with a few stars of their own - among them Greg Chappell, Doug Walters and Dennis Lillee - and they were giving no quarter. They had the upper hand in the drawn first Test and then administered a royal beating in the second. Come the new year and the action moved to the MCG for the third match ... and one of the greatest batting performances of all time.

All to play for
John Benaud Because we were playing the Rest of the World, and not England or South Africa, there wasn't what you would call a real Test match feeling for me as a player making his debut. The Australian selectors were using the games as a series of trials for the upcoming Ashes tour. I was excited because in effect it was my first international, but it didn't have the sort of effect it would've had if I were playing a country. Still, to be part of the series against the Rest was a wonderful experience.

Peter Pollock My brother (Graeme) and I could only join the series from the third Test on as we had to stay back at home in South Africa and play provincial cricket. It was a vital Test for the series as the Rest of the World were getting bad press for poor performances in the previous two Tests. Richie Benaud almost insinuated that Sobers had become Dennis Lillee's bunny as Sobers had scored hardly any runs going into the Melbourne Test.

I was the last recognised batsman in the line-up and there was pressure on me, but it was brilliant to be there in the company of Sobers and I enjoyed that pressure. And having played with Sobers in previous World XIs - in the 1966 Rothmans Cup and then again in 1970 in England - he wasn't a stranger to me.

Garry v the Menace
Garry Sobers I went in to bat (in the first innings) and Dennis came up with a short-pitched ball. I played a little bit early and (Keith) Stackpole picked me up at second slip. That evening I went to the dressing room where Ian (Chappell, Australia captain) was sitting and said to him, "You've got a boy here called Lillee. Every time I have gone in, all I have got from him is bouncers. I want you to tell him that I can bowl quick too, and I can bowl bouncers. So watch out for me when he comes in."

We were in the field, the Australians were batting in the first innings and Dennis came in and I ran up and bowled a couple of balls to try and get him out. I had told Tony Greig about my conversation with Ian - and Tony Greig is like an elephant, he doesn't forget anything. He came to me and said, "Why don't you let him have it?" I said, "Let him have what?" He said, "Let him have the bouncer". So I bowled Dennis a couple more, which he got behind very elegantly, and I said, "Now I'm going to let him have it". I ran up and I bowled this bouncer, and it whizzed past Dennis and he looked at me and he had turned completely pink. I knew by that time that I had got him. The next ball, I took the weight off, and he slogged it in the air and Greig caught him.

At the end of the day's play we went back to the dressing room and I went to Ian again and sat by him. He said, "I'll tell you something: when Dennis came in, before he reached the room, the bat hit the wall, and he said, 'That little so-and-so, I will show him. I haven't really bowled quick at him yet'." So I said, "Well, he's got the ball, I've got the bat. I've never met the one who can scare me before, and I don't think that I will."

Pollock I wouldn't know if there was any needle between Sobers and Lillee. The media wrote that. Lillee was an aggressive fast bowler. The first four balls I got in the first innings from him were all bouncers and just told me that the Australians had owed me the bouncers for many years; For ten years we had given them a thundering and he said it was just in return for all that.

You've got a boy here called Lillee. Every time I have gone in, all I have got from him is bouncers. I want you to tell him that I can bowl quick too, and I can bowl bouncers. So watch out for me when he comes inSobers to Ian Chappell

Two-hundred-and-fifty-four
Ian Chappell Obviously such a good innings leaves imprints in your mind. There was a bit of history to it, because Dennis had bowled so well in Perth, and then got Garry out first ball for a duck in Melbourne. I think Sobers had sort of said to himself: "Well, this young fast bowler is starting to create a bit of an impression here. We'd better let him know that there are a few batsmen around who can play him."

It was an incredible innings.

Doug Walters We had a pretty good bowling attack but he made them look second-rate and that's what good batsmen always do. He hit the ball with tremendous power and everyone was hoping that it didn't come towards them and the bowlers were hoping it didn't come back to them as well.

Pollock The fantastic thing about Sobers' batting was not one particular shot - he played a whole heap of them. You look at some batsman and say that he has a wonderful cover-drive or a wonderful hook and whatever, but Sobers was a complete batsman. The beauty of that innings was that he played it all around the field. Whether it was front foot, back foot, there was Sobers.

Benaud Two shots: one was when Lillee had taken the second new ball. He bowled a really good yorker on the off stump and Sobie square-drove it past point, Kerry O' Keefe, who hardly had time to react before it hit the cement gather and bounced about ten or 12 yards back into the field. Any other batsman would have been bowled, but this bloke had the time to open the face of the bat and hit it past point.

The other shot was off Bob Massie. Sobie thought it was going to be going away from him but it was a late inswinger. So he changed his shot, mid-shot, in the downswing, and instead of hitting it through the off side hit it on the on side. Terry Jenner and myself, standing at midwicket and mid-on respectively, just sort of stood and looked at one another and laughed and shrugged.

It was the most amazing innings in terms of timing and power. He had such rubbery arms and wrists, and the power he could get through those wrists was extraordinary.

He just hit four after four and some of them were so thunderous that they would hit the concrete and come back into the field of play.

From time to time I went down the track and said to him, "Don't give it away." We needed a lot of runs to come back into the match, and I was scared that he would play a careless shot and give it away. But he just continued to hit the ball all round the field.

Chappell He was 139 not out on the night before the rest day, and it was our turn to go into their dressing room. I head over in his direction to congratulate him, and he says: "Sit down, come over here." So just the two of us are in a quiet corner, and after I pour him a beer, he has a sip and then says, "Prue's left me." Prue being his wife who lived in Melbourne in those days. I said: "Sobie, if that's the bloody thing that's annoying you so much, give me her phone number, and I'll tell her to get bloody home straight away." You know, he just laughed. And it didn't make any difference - he came out and belted us again.

One for the pantheon
Sobers You know, Sir Donald Bradman thought it was the greatest innings he ever saw played in Australia. And coming from Sir Donald it was a great honour because he had seen so many of the great players. The important thing about that innings was that when I was walking off, and they were all clapping, Dennis looked at me and said, "I've heard about you and now I've got my tail cut properly." Since then Dennis and I have been the best friends that you could ever see.

Benaud Dennis was always very confrontational, no matter who he was playing against; he always wanted to prove that he was the master of the batsmen. But by the end of Sobie's innings every bowler and every fielder had had enough - it was pretty much slaughter. Sobie's innings would be second in my all-time list.

Walters It was an all-round gem of an innings, no doubt. It certainly was one of the best I ever saw and as far as international games went, it was my No. 1. We all learn something from watching the best. And his innings had its impact on my second-innings hundred. Though not too many remember that I scored 100 before lunch in the wake of Sobers's innings - somewhat like how Arthur Morris's innings of 190-odd in the match that Bradman got a duck gets overlooked.

Nagraj Gollapudi is an assistant editor at Cricinfo
Ian Chappell quotes from The Chappell Years, Cricket in the '70s by Mike Coward; Garry Sobers quotes from interview in Wisden Asia Cricket, July 2002 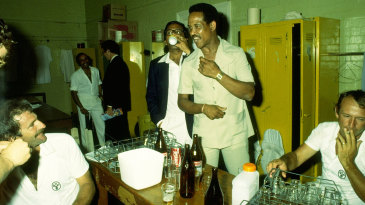 The man who could do everything

In the month he turns 80, Super Sobers stories from around the world 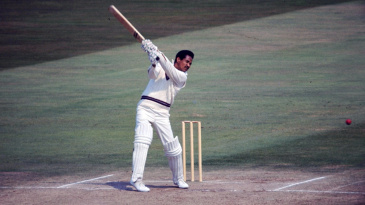 'The best batsman I have ever seen'

Part one: Ian Chappell picks the best centuries he has watched. First up: Garry Sobers' 254 at the MCG