'There are no skeletons in my closet'

Fifteen years after he retired from international cricket, the New South Wales hero and star of the tied Test still has the spark of old

No one presented my baggy green to me.

I don't see any change necessarily as far as the art of spin goes but the decision-making is a big thing that has changed. Of my 500-plus wickets just about two were given out on the front foot.

At the end of the first day of my debut Test I thought I was playing with an average group of people. I couldn't believe how greedy and self-centered, and in fact immature, a lot of players were in the team. I couldn't get over how they did not give a damn about the big picture; how they only gave a damn about themselves. I couldn't get over the lack of respect for the leader, Kim Hughes. It was a highly, highly disappointing experience. I was shocked.

Aggression was important to me because it gave me an advantage over the opposition.

There isn't a person that I played with or against that I can't look in the eye. There are no skeletons in my closet.

Gordon Nowan, my coach, was the one who educated me in the game. He had the greatest cricket knowledge. He was a very proud, disciplined man. I would sit down every Saturday morning and Sunday afternoon with him and we would talk about the game. I learned more from him in the 1960s than I learned from 99% of other people in the next 40 years of my life.

I have great respect for Ian Chappell.

I can pull out an act but I never was an actor on the field.

Though I enjoyed the idea of what Dennis Lillee and Jeff Thomson did, during the schoolboy trials I listened to my dad. "Bowl your offies today, son," dad said. "There'll be a thousand medium-pacers and very few spinners". I made the New South Wales schoolboys team that year and it was great.

I didn't get into the psychology of sport until I was 15.

I played against Mike Hussey for a few years. He was the only bloke I just couldn't scratch the surface of. He was a rock.

Warne turned a nation on. He turned the world, too.

What separates us Australians is our great passion, our great sense of the world, our independence, our hunger for competition. We love to win.

In my early playing days I was treated like a third-class citizen, both by the cricket association as well as the senior players. I never agreed with that: I didn't think any of them was better than me. I certainly didn't respect and appreciate the system that they tried to enforce on me.

I'm very proud of my sledging, but like everything in life there are boundaries.

What separates us Australians is our great passion, our great sense of the world, our independence, our hunger for competition

I have an unbelievable amount of respect for Allan Border, but he was a poor captain. I only played two Test matches under Allan where I had total freedom at work. Before I went to Sri Lanka in 1992, Mark Taylor was vice-captain. John Benaud, the Australian selector at that time, asked Mark, "Why does Mo bowl so well for New South and not for Australia?" Mark said, "Well, at New South we let him run." So Mark spoke to AB. AB said okay. The only time I was Man-of-the-Match was in the first Test of that series.

My coach taught me that more than statistics it was the character of the people that was important.

Integrity is both my best and worst quality.

When I became captain at NSW we had not won a first-class game in two years. We then won three from seven without our Australian players and finished second.

I never asked for any quarter. None. I took what I was given. I never complained about getting bounced; being called a honky white boy, [being sledged] about my mother, about animals, about sex, about my hair, about my physical appearance. It just hardened my resolve.

Patience was never my strong point. It is a virtue, there's no doubt about that, though.

In the tied Test AB walked up to me and tried to take me off at one point. I said, "Piss off." I knew I would be successful on the Indian pitches. I knew I could do the job.

My best century came at the MCG against India in 1992, on the worst first-day pitch I ever played on

Wasim Akram and Malcolm Marshall by the length of the straight were the best fast bowlers. I was scared. Heaps. Heaps.

I took literally 50% of my wickets in Test cricket in four innings - purely and simply because AB got out of my face.

Batting was always easy for me because I used to just climb into my cocoon and batten down the hatches and believe 'These blokes are just not going to knock me over.' 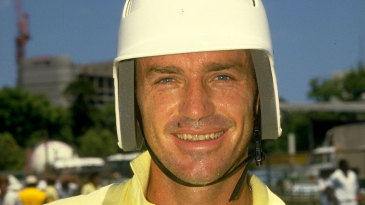 The season of Mo

Thirty years ago Australian cricket needed a hero. In Greg Matthews they briefly found an unlikely one 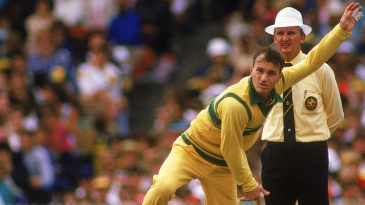 The high priest of the eccentrics