On their Test comeback, South Africa were received warmly by the Bajan crowd, but not by the West Indies team

South Africa's first visit to the West Indies went through just three weeks after the country's white population voted in favour of President FW de Klerk's reform. The awkward - if not outright hostile - reception feared did not materialise, and a team with just one non-white player, Omar Henry, was warmly received. On the field it was a different story, as South Africa lost all three one-dayers. Then came the one-off Test, which went down to the wire.

Andrew Hudson, South Africa opening batsman Coming into Test cricket wasn't so easy. We had played just one-day cricket, and four-day cricket at home, in the preceding months, after our re-admission. Only at the end of the World Cup were we told there was a tour in April to the West Indies.

Gerald de Kock, commentator for South African radio It was like young schoolboys being told that they had got an extension to their holidays. There was unbelievable excitement and wide-eyed looks on the players' faces as the plane landed in Jamaica.

It was a difficult time for West Indies cricket. Richie Richardson had just taken over as captain. There was controversy over the number of Barbadians - or lack thereof - in the team.
Richie Richardson South Africa had just come back into international cricket, and a lot of the Caribbean people had been very sensitive about the South African situation. Also Barbados was going through an economic slump, and even their cricket was going through a rough phase. When one of the Barbados players, Anderson Cummins, was omitted from the final XI, there were protests, and the locals ended up boycotting the game. It was very disheartening as I thought the selection process was democratic, but because of the insularity in certain sections of our cricket the boycott call was taken seriously and a great game of Test cricket was missed by the public.

Hudson The boycott was about Cummins' being left out, not about South Africa playing. Till then I never realised the politics of West Indies cricket in terms of so many countries playing under the West Indies flag. The World Cup defeat [South Africa beat the West Indies in a round-robin game] really hurt them, and they would've liked beating us because we were essentially still an all-white team at that stage.

In the first innings the surprise package was Richard Snell, the medium-pacer, who took four wickets. West Indies were 219 for 3 at one stage, but collapsed to 262 all out. When South Africa came out to bat, Hudson decided to make his innings count, and ended up making a century on Test debut - the first by a South African.
Hudson It was a sort of a wicket that if you played yourself in you could stick around. Test cricket was new to us, so rather than get in there and try and dominate from the beginning, we were trying to find our way and see how the game is played.

Dave Richardson, South Africa wicketkeeper Hudson had an unflappable temperament, born largely of the fact that he is a very religious man. Sometimes he would seem so calm that he appeared half-asleep. He was a very clean hitter of the ball, and when things clicked he would score quickly. He could hook and pull very well as well as drive, which made it difficult for the fast bowlers to bowl to him when on form.

Kenny Benjamin, West Indies bowler Hudson wasn't the most aggressive of batters, but he put the bad balls away. It was one of the best Test innings I've seen.

de Kock His innings made a statement: that we can perform at this level, and we've got the players who can do it. It was a special innings in a special time for us watching, and I was lucky to be there.

More than anything, to see a South African team wearing that cap was surreal. It happened so quick and suddenly we were watching South Africa play a Test and getting themselves into a position to winGerald de Kock, radio commentator

At the end of day three, South Africa seemed to have it in the bag. They had a first-innings lead of 83, worth its weight in gold on a pitch that had begun to act up, and now they had reduced West Indies to 184 for 7.
Richie Richardson Barring Jimmy Adams, the rest of the top order were out and everyone had ruled us out. On the rest-day evening there was a party aboard a cruise boat where both teams were invited. For some reason the Bajans kept playing the famous calypso, "The Sinking Ship" [which had the refrain, "Captain, the ship is sinking"] all night. And they dedicated it to me. For some reason, that gave me a positive feeling. "We are not going to lose this match," I thought.

On the fourth morning, things began to go pear-shaped for South Africa. Adams proved impossible to dislodge. With the tail, he put on 99 more runs.
Dave Richardson For me, Adams' rearguard was the turning point. Those extra runs were crucial. We bowled too many balls down the leg side, and half-volleys. Adams played very well, and the tail was difficult to dislodge because although the pitch was keeping low, there was not much sideways movement and a big straight bat was difficult to beat.

South Africa needed 201 runs to win, and though they lost their openers quickly, they recovered to finish the day on 122 for 2, thanks to a terrific partnership between Kepler Wessels and Peter Kirsten.
Hudson The wicket was getting slower and terribly uneven, so scoring runs was proving difficult. But we didn't think too much about the target. Perhaps we should've been more aggressive, which would have spread their field and put more pressure on one of their bowlers. We could have just won it.

Dave Richardson Kepler played a superb innings in the circumstances. The new ball might have come onto the bat a bit more quickly, making scoring easier initially, but he took full advantage of it and played in an attacking fashion. Peter Kirsten was desperate to score runs, and to prove to the world what a good player he was. They both played as well as they had ever played.

Many in the team, mainly the bowlers, thought it was in the bag. Meyrick Pringle even bought a few bottles of champagne in anticipation of the win. When we found this out, he was admonished for his over-confidence and the bottles were banished from view: we ended up giving them to the West Indies team in the end.

Day five. West Indies came out all guns blazing. Courtney Walsh and Curtly Ambrose led the charge.
Richie Richardson On the final morning, knowing that Walsh could bowl very long spells, I asked him to initially bowl into the wind for a short three- or four-over spell while Ambrose would bowl with the wind at the other end. My plan was to change their ends after the first spell. But when I went to him after four overs, Walsh said, "Give me another one, skipper." After six overs he told me the same thing. And after the first breakthrough he didn't look back.

Hudson Walsh and Ambrose just bowled an unbelievable line and length, which made it very difficult for us to score and we ended up losing wickets. In the first innings they had tried to attack, whereas in that last session they bowled on and just outside off stump.

Benjamin On the eve of the final day, at one of the social gatherings, I heard Pringle say to Brian Lara, "Tomorrow, after the win, South Africa are gonna have a big party." Lara told him, "I hope you won't be the one to hit the winning runs." Pringle said, "No, I won't be needed." The next morning when Pringle walked in he was white as a sheep because he knew it was all over for South Africa.

Dave Richardson The biggest problem was that we were not scoring any runs in between the wicket-taking balls. I think we showed our inexperience: no one tried something different by batting outside his crease or coming down the wicket - not easy to do at the best of times against Walsh and Ambrose. I was trying to play them off the back foot. On that wicket, I should have been encouraging them to try and dig it in.

In the space of 26 runs, South Africa lost their last eight wickets. Ambrose took 6 for 34, Walsh 4 for 31. West Indies won by 52 runs.
Richie Richardson The best thing was the team was able to rally together from a near-fatal position. We did a victory lap, running hand-in-hand around the stadium to show unity within the team. It was very disappointing that the Bajan crowd didn't come out to support us, but then we had a job to do and we didn't give up and we did it magnificently.

Dave Richardson They were a proud team: they were not prepared to lie down and their persistence had been rewarded. When you win after everyone else has written you off, you become united as a team. I think the crowd or lack of it was irrelevant.

de Kock More than anything, to see a South African team wearing that cap was surreal. It happened so quick and suddenly we were watching South Africa play a Test and getting themselves into a position to win. And then the brutality and the reality of Test cricket came home very forcefully on that last morning.

Hudson In hindsight it was a good thing for us because we weren't yet a good Test-playing nation; we didn't have any experience. So a victory would've put a lot of pressure on us. The nice thing was we weren't hopelessly outplayed. We realised that we could play at this level. That was a great encouragement. 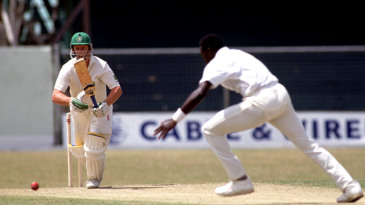 The return of South Africa, on a tour they didn't want

Exhausted at the end of a long season, South Africa played their first Test on their return to international cricket in Barbados in 1992 - and nearly won