Hits of the seventies

In 1975, during the World Cup, the Kennington Oval in London turned briefly into a slaughterhouse. Two Sri Lankans, Sunil Wettimuny and Duleep Mendis, were engaged in a bloody fight against the fastest bowler in the world, Jeff Thomson.

Sri Lanka were healthily placed at 150 for 2 in the 32nd over of the 60-over game, chasing a target of 329, when Ian Chappell unleashed Thommo for the second time at the pair. Thommo was in a nasty mood and let rip balls of fire.

"It was a like a flash. I couldn't see the ball," Wettimuny remembers. The balls leapt off the pitch short of a length and thudded into the body. Again and again. There were no helmets.

"It was the fastest spell of fast bowling I had ever faced in my life," Mendis reminisces. "He was averaging over 100 miles." Mendis stresses that the speeds he is referring to are just the average, not the high point of that spell. "It was seriously fast and we had no protection."

Thommo kept pinging them in at the body. Later he said, "They were only little fellas, so you couldn't call it a bouncer exactly!"

"You couldn't pick the ball cleanly from his action that he had - plucking the ball from behind - and over that, he was firing them at top speed. It was a great challenge," Mendis says.

It was almost fatal too. Mendis copped one on the head from a lifter and went down as if he were shot. According to Thommo, Mendis muttered, "Oh my god, I am going now" - which Mendis has always denied. "I was under concussion. And I went to the hospital." Just before he left, he saw a sickening sight in the middle.

Thommo had turned his fury to Wettimuny. The last ball of one particular over was a fast yorker that rammed against the foot. Wettimuny yelped in pain but got no sympathy from Thommo: "Look, it's not broken, you weak bastard. But if you're down there next over, it will be."

Wettimuny had some treatment and willed himself to carry on. And yes, he was on strike when Thommo returned. The ball blurred through the air and crashed into the same spot again. This time the foot was broken - and so was his will.

Thommo even threw down the stumps at the striker's end with Wettimuny out of the crease, hopping in agony.

Wettimuny and Mendis checked into the same hospital. A laughing Mendis recalls bumping into a policeman there, who, unaware of the cause of the injury, asked him, "Sir, do you want to press charges against this man [Thomson]?"

Mendis had the last laugh, though, when he faced Thommo again, in a one-dayer against Queensland in Brisbane nearly 10 years later and hit 72 not out, leading his team to a win.

Was it the perfect revenge? Mendis laughs again. "No, no, nothing like that. Thommo had an injury then and he was not as fast. He was still pretty quick but not the same old bowler."

Mendis, went on to lead Sri Lanka to their first Test win and their first series win, and is currently the CEO of Sri Lanka Cricket.

Wettimuny, too, had a nice little moment under the sun, at a World Cup, 20 years on from that first one.

When Sri Lanka won the 1996 tournament, Air Lanka decided to send in a special flight to bring the heroes back. The captain of that flight was Wettimuny, who had turned a pilot by then. Arjuna Ranatunga entered the cockpit and the two captains posed with the cup. Mendis was the manager of the team then. The two men who had a nightmare at the hands of Thommo were living their dream.

Sriram Veera is a staff writer at Cricinfo 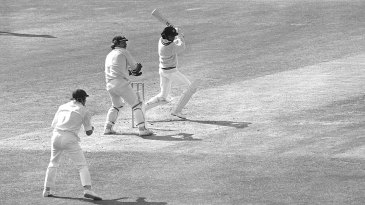 The Sri Lanka I grew up on

They were a competitive side in the '70s, but it's a pity that not all of their finest players of that era got to play Test cricket