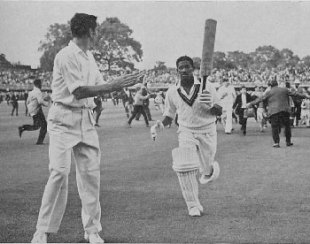 Wisden called this match one of the most dramatic played in England. It was possibly the greatest Test played at Lord's. Certainly it was one of the closest, going to the very last ball on the final day with all four possible results still open. In the final over England needed six runs and West Indies one wicket - that's how close it was.

The sides were well matched. I was leading one of England's best teams ever, and West Indies under Frank Worrell were very strong.

Their great advantage was the variety they had in the bowling. The fast-bowling pair of Wes Hall and Charlie Griffith was clearly a major factor, and they also had Lance Gibbs, Garry Sobers and Worrell himself. It was Wes who turned in one of the crucial performances of the match, bowling straight through the full period of play on the last day - three hours and 20 minutes.

The truly decisive role, though, was played by the unsung Basil Butcher, who made well over half of West Indies' second-innings total of 229. It was a stupendous effort on a difficult wicket; especially when you consider that nobody else got a hundred in the match.

The weather played a part as well. Bad light stopped play at five o'clock on the fourth day, and we didn't resume till after two the next day. We were chasing 234 for victory, and it was against our interests to have play held up for so long. I also felt a little hard done by at the slow over-rate, which compounded the pressure - though it wasn't really part of West Indies' strategy.

Wes was able to bowl for over three hours straight. He was the most effective bowler for them, and he derived a lot of lift from the pitch on the fifth day. In the process a few of the English batsmen copped a number of blows to their bodies.

In the first innings I got a couple of Griffith specials on my left knee, which left it swollen and stiff. I was actually off the field in the second innings, and I found batting virtually impossible during our chase, which made me a bit of a passenger. But the ones who had the worst of it by far were Colin Cowdrey and Brian Close. I saw Cowdrey being hit by a bouncer from Wes, coming back to the pavilion with a broken arm, having it put in plaster, and then walking out as the last man in the second innings.

Close had to endure plenty of pain too. He played a brave innings - and one that attracted some controversy, in that after defending for long he started to move down the pitch to upset the bowlers' length. To me that was a legitimate tactic as the ball was lifting off a length and he was trying to negate the bowlers' advantage by going for his shots. In fact he just about brought us to the door of victory playing the way he did.

Finally it came down to the last ball. Just as Wes was just about to start his run-up, Worrell stopped play, went up to Wes and said something

As the game neared a climax the nervousness in the England dressing room was palpable, with everyone counting down the runs. It was similar to the previous winter in Melbourne, when we had chased 240-odd for victory and everyone in the dressing room had counted the runs as they were knocked off. There we had won comfortably, but here it was a battle for survival.

Finally it came down to the last ball. Just as Wes was just about to start his run-up, Worrell stopped play, went up to Wes and said something. We wondered what. I believe it was: "Make sure you don't bowl a no-ball."

He didn't, no runs were scored, and the honours were even with both teams satisfied. But thrilling as the finish was, one of the key periods of the game for me was on the first morning. Twelve runs came off the first over - from Derek Shackleton, who had replaced Brian Statham in the attack. Yet only 35 more were scored in the whole of the morning session. We had fielders around the bat and the ball was in the air a few times. We should have had three or four wickets at least, but we couldn't make the breakthrough. It may have made the difference in the end.

Ted Dexter led England in 30 Tests between 1961 and 1964. He spoke to Nagraj Gollapudi. This article was first published in Wisden Asia Cricket magazine 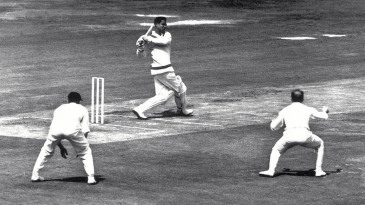