'Being a perfectionist was my problem'

Play straight, talk straight - what you got was what you saw with Turner, one of New Zealand's first professional cricketers 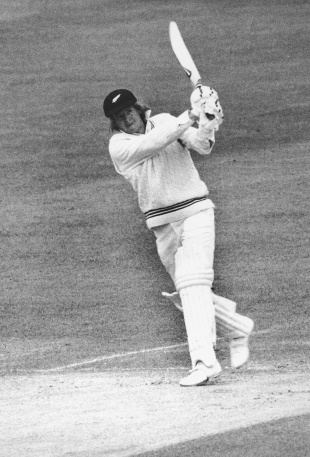 "I started to play a few shots, because I needed to not only entertain a few others but also myself" © Getty Images

As a kid in New Zealand you play cricket in summer and rugby in winter. I played cricket and hockey. Not rugby. I wasn't brawny enough for it. Or silly enough, perhaps.

I was a perfectionist, and that was probably part of my problem. I didn't believe in playing across the line, whether the cut or the pull. It was all full blade. And generally looking to defend first and never attack. I thought the bowlers were supposed to be better than me [he started first-class cricket at 17]. So by just staying there, I thought I was achieving something. My narrowness of mind cost me then.

I just say what I feel and think and I would like other people to be the same. That got me into a lot of trouble, but I make no apology.

Being the first real professional I was supposed to be playing for the dirty dollar - not many, I might add. I had to cross over from amateurism to professionalism, and there was a strong feeling among the administration and our country as a whole that you ought not to play for money. I had to break down a lot of barriers. And assumptions were made. One of those assumptions made was about selfishness, which I totally deny.

I wasn't conscious of modelling myself on anybody. As a young kid you want to just play. Once you start getting older, you start arguing with your neighbourhood kids about who you are. At that stage I was Bert Sutcliffe, even though he was a left-hander.

In those days the New Zealanders who played county cricket lived in England. I was the first to travel back and forth and play. You could only do it by sea, and it took very long. I was probably the first real professional in that regard.

I would love to play cricket today, with all - I am not just talking of money - the opportunity you get, the practice facilities, the amount of time you are able to put into preparation.

The batsman who impressed me most was Tom Graveney. He was 40-odd when I went to Worcester. He used to drink eight or nine pints of beer every night - that wasn't the thing I admired, incidentally - but he was the first up in the morning, and then first to the nets. He was a very controlled player. He had poise at the crease. Good balance. The only thing he didn't do, when one-day cricket came around, was hit the ball in the air. At the age of 40-plus, you think, "Why bother?"

I used to practise in front of the mirror the forward-defensive, the backward defensive, the drive, the various shots. I did that as soon as I could hold the bat. Langford Smith, Bert Sutcliffe and Billy Ibadulla coached me.

It was a matter of trying to survive. The money was a pittance. I remember going to Pakistan as captain in 1976. I was the only professional in the side. I was the lowest paid. No one would pay me while I was absent here, and other players were getting half or full salaries from their companies in those days.

Old perceptions die hard. When I played, we went to tour straight after the monsoon. The pitches used to go off the top. Always Australia and England coming after us. We played quite often in smaller centres. But even when I was coaching in the mid-80s, when we were having all that success - in fact, Australia and England used to play for the wooden spoon called the Ashes - it still didn't change our rating in terms of perception in people's mind. Not much has changed still.

Most of us, when we are younger our vision is very narrow. We pick up a paper and look at the scorecards and not much at the news pages. I tried to break away from that, and in the last half of my career I broadened my mind a bit, and that's why I started to play a few shots, because I needed to not only entertain a few others but also myself.

"I don't think anyone in the so-called modern game can say that I am not up with the play. I would like to think I am ahead of the game. That may sound arrogant, but it's not intended to be

You have to be skill-fit. The more time you spend at the crease, the more you get fit to do that job. For bowlers you have to be bowling-fit. Guys now don't bowl nearly as many overs as they used to. They do a lot more work in the gym. I am yet to be convinced that it works more than being able to take your shirt off at the beach and show off.

Bert Sutcliffe was a quiet and humble man. He used to run a retail sports shop in Dunedin, my hometown. He was too generous. We would go in to buy equipment and he would give it away for half price. He did that with lots, and it didn't help him as a businessman. He played the piano. He was very good socially.

I thought I had really made it when Lance Cairns criticised me for being too loose and giving it away!

I met my wife in Bombay at an official function. And then we courted for three years. That's a great old term, "courting". And we had to do it quietly, of course, because you would know the difficulties one might have with Indian parents. She was advised by her father that people in the west don't take marriage seriously. Statistics are there to prove it, I suppose. But each time I see him now, I say, 34 not out… 35 not out now, this year.

I remember being lowered in the order, in Hyderabad. Those days seamers bowled two overs each, and then spinners came on. So they wanted to whack the new ball and I was seen as too defensive. I said afterwards, "Well you only had to ask me." But no one had bothered. They had made their assumptions, so when I came at No. 10 or whenever it was, I whacked it over the top.

Two centuries in the first-ever win over Australia was probably the most significant contribution I made. It was a low-scoring game. I didn't play particularly well in the first innings, played and missed a lot - mind you it was a green one. My perfectionist approach to things was exposed a little bit. I wouldn't say it was my best innings. But it was our first victory against Australia, so it meant something.

I enjoyed watching Colin Cowdrey because of his poise. He was always known for clipping it to the boundary. It always used to just beat the fielder; he didn't smash it. Guys with his build probably wouldn't be able to play now because they wouldn't measure up to the new fitness standards. As far as I am concerned, if you can score runs, you can be as portly as you like. We have one too [Jesse Ryder]. The way he bats, he doesn't need to do much running.

I studied my game, I tried to improve my game all the time. Through doing that you learn how to handle different conditions. 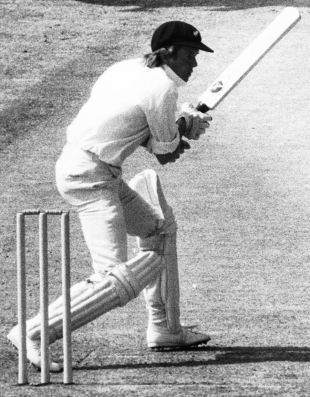 "I thought I had really made it when Lance Cairns criticised me for being too loose and giving it away!" © Getty Images

Recently I asked a question of an ex-player about the way players celebrate success today. There are much higher highs and much lower lows. He made an interesting comment. "When I played, the bigger money was just starting to come in, and suddenly we had agents. My agent said to me, 'We need to talk to you about how you celebrate success on the field. We have got to improve your image.'" He fired that guy, because he was not interested in going down that path. Now there seems to be an expectation, and it has become the norm. If you are not running in from the boundary and high-fiving everybody, you are not seen as a good team-mate. If you are not yelling out encouragement every ball, you are not seen as a good team-mate. In today's cricket, I would not be seen as a good team-mate, because they will never be able to talk me into behaving like that.

Getting 300 in less than a day - not out - was particularly satisfying. Because I didn't think I could get 300 in a day. Probably nobody else thought so too.

The hundreds in the West Indies were - although they didn't result in victories - an endurance test, having to bat for 10-plus hours, 11-plus hours, under hot conditions. Mentally it was quite pleasing.

It is much harder for players now. With the attention that's paid to them, it takes a strong young mind to take all the money and the exposure and come through it with a level head. Life has become more complicated now. Young people have to make a lot more decisions than was the case previously.

You can get too close as a team. You need time away from each other. You change in the same dressing room, you play on the same cricket field, you stay in the same hotel, you travel in the same planes and buses. C'mon this business of everyone holding hands and being pally is nonsense.

I outlast them all, don't I? [He's a selector now] I find the game really interesting. I even find Twenty20 interesting. As long as there is a bat out there and a ball, doesn't matter what you do with it, something is happening, which is interesting. I don't think anyone in the so-called modern game can say that I am not up with the play. I would like to think I am ahead of the game. That may sound arrogant, but it's not intended to be.