Sri Lanka and Pakistan may get along just fine these days, but back in 1985-86 it was knives out all the time

On the eve of the first Test of the current series, Younis Khan spoke about how cordial the relationship between the two teams was. It may now seem to have been that way forever, but once upon a time they played out bitter back-to-back series. The year was 1986 and Pakistan had come to Sri Lanka after having beaten them at home, "to be taken aback by the hostility of the media and the public", as Imran Khan wrote in his book All Round View. The result was an ugly series, where the main bone of contention was the quality of the umpiring. 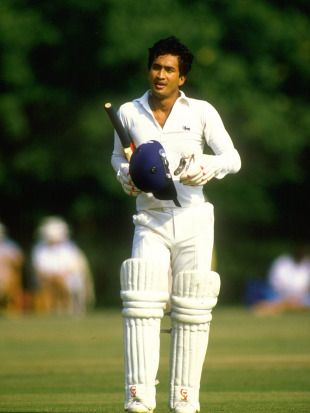 Stay or go? Wettimuny felt it beneath his dignity to not walk in the fractious first Test Adrian Murrell / © Getty Images

Imran Khan, Pakistan captain We learnt that Duleep Mendis, the Sri Lankan captain, had given such a biased account of his team's tour of Pakistan that the entire country was up in arms against us before a ball had been bowled. Pakistan's ambassador to Sri Lanka told us that he had telegraphed the BCCP and advised them not to send the team, because he felt that the atmosphere was not conducive to a tour.
Sidath Wettimuny, Sri Lanka batsman In fairness to Pakistan, one of the reasons [for the acrimony] was there was bad umpiring. Even in Pakistan we had some terrible umpiring. We had many battles. I don't know if it was tit-for-tat.
Ramiz Raja, Pakistan batsman We prepared green tracks and we had a good bowling attack, and we floored them in the home series. The subcontinent was caught in that wave when home batsmen were given a lot of chances by the home umpires, so Pakistan was no different.

Things reached a head pretty quickly when the umpires walked off the ground on the first morning of the series, in Kandy.

Imran On the first morning of the match, before it was barely half an hour old, umpire Felsinger, while turning down an appeal, told us to shut up and get on with the game. He added that this was "not Pakistan".
Alane Felsinger, umpire in the first Test I never utter a word to players, because I was taught not to speak to anybody. A player can appeal as much as he can.
Ramiz [Felsinger said] Something like that. We were being taunted.

Imran Arjuna Ranatunga was given at least half a dozen lives by the umpires. In frustration, our close-in fielders called him a cheat and he walked off the ground, taking the umpires with him.
Felsinger Arjuna was batting well. Wasim Akram was bowling. Imran came to me and said, "This is the first Test match and there are two matches to come. I will see to it that you umpire those two matches also, just give Arjuna out. I told him, "Imran, I have been umpiring for the last 20-odd years and I have never cheated. I have been honest in all my ways."

"We were in an awkward position. We were friends with Aravinda and Arjuna, and suddenly we had to act tough and be aggressive, which was unfortunate" Ramiz Raja

After that the wicketkeeper, the slip and short leg used to talk and disturb the batsmen as Wasim ran in to bowl. Arjuna pulled out once, and when he came back to the crease they disturbed him again. Arjuna walked up to me and said, "Sir, people are disturbing. I can't bat."

I called Imran and said, "Please see to it that your players don't disturb." He called them and said "Don't shout", but again they did the same. Then I told Imran, "I am giving you a last chance. Next time I will suspend play." They began to shout again, and I told the leg umpire S Ponnadurai, "I am going to suspend play." I told Arjuna and Roy Dias. We took the bails, and we and the two batsmen went to the pavilion. Pakistan players sat on the ground.
Imran He wanted an apology from me. I asked him why he had provoked the players by telling them that "this is not Pakistan". He said he hadn't. So I told him that if he hadn't then neither had anybody called him a cheat either.
Felsinger Their manager came to the ground and spoke to Imran for five or 10 minutes. After that Imran came to the pavilion, and in the presence of Ponnadurai and the reserve umpires, I asked Imran to stop it. Eventually he said, "I am sorry." Then we continued play.

Long before Adam Gilchrist antagonised his team-mates by walking in a World Cup semi-final, Wettimuny did the same, and in circumstances much more fraught.

Ramiz He was a gentleman player. And he surprised us too. And surprised the umpires and his own team.
Imran Wettimuny walked, even though the umpire had not given him out, and we learned that he was criticised by his own team for doing so. When I heard that, I lost all respect for the Sri Lankan captain and players.
Wettimuny I think I disappointed some of my management. But all my life I have played my game that way. I don't think I would have changed my game for that. It was more bat than pad, and I was clearly out. It was a habit. I was pulled up for it by certain quarters. I felt it beneath my dignity to not walk. How could you look the players in the face then?

Pakistan won the match easily, by an innings and 20 runs. Sri Lanka outplayed them in the second Test, at the Colombo Cricket Club Ground. Things got even uglier in this match.

Imran When Javed [Miandad] was given out he almost had a punch-up with the Sri Lankan players, and as he was returning to the pavilion someone threw a stone at him; he ran into the crowd to punish the offender and the players followed to protect him.
Ramiz There were no neutral umpires. We had a big fight, also. Javed was hit by a - not sure whether it was a stone or a beer can, but obviously he acted violently and a little war erupted.
Imran Not a single voice was raised against the umpiring or the behaviour of the spectators. In Pakistan and elsewhere there are a few journalists or fellow cricketers who point out these things when they become excessive. In Sri Lanka we felt as though we were locked in a darkened room without a chink of light.

Pakistan refused to continue with the tour.

Imran We all agreed that there was no point in continuing the tour. We drafted a statement to this effect, but General Zia [Pakistan's president] called me up and told me to persuade the boys to complete the tour.

There had been no prior acrimony among the players of the two teams before the series, and some, who had played against each other at junior levels, found themselves caught between the conflicting pulls of competition and friendship. 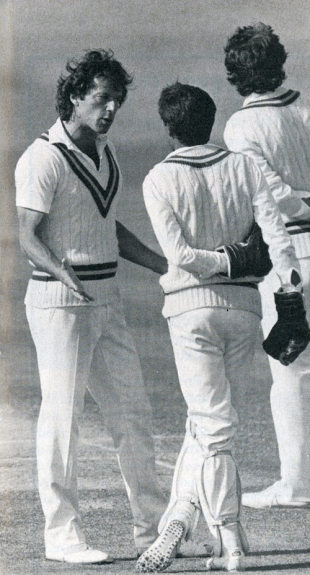 Ramiz I personally had played cricket with some of the Sri Lankans at Under-19 and Under-23 levels, so we felt very comfortable. We were in an awkward position. We were friends with Aravinda [de Silva] and Arjuna, and suddenly we had to act tough and be aggressive, which was unfortunate. It was a tough period for some of the Under-25 guys.
Wettimuny Bad umpiring caused most of the problems. We had a very good rapport with most of the Pakistan players. We never had a problem. We fought on the field and would come back and laugh about it.

The players were more or less in agreement about the level of umpiring, in both series.

Ramiz I wouldn't like to use a heavy word like "cheating", but definitely there was a blatant bias. I got rough ones, too, a couple of times. I have never reacted in my entire career as a batsman, but because the environment was so volatile, I lost it a couple of times while coming off. I swore at the umpire a couple of times. We also had to appeal for longer durations. Every time there was a leg-before shout, it had to go on and on. We discussed in the meetings as to which umpire needed to be put under pressure.
Wettimuny Even I was disappointed in Sialkot. I got 45 on a crazy, green track, with Imran and Wasim and Mohsin Kamal bowling very well. I battled and battled and got 45. In the second innings I got a bad one in the first over. But I walked off.
Felsinger How can a fielder judge an umpire? I had been umpiring against England, Australia, West Indies, against New Zealand. There was no bias. He [Imran] just wanted to win the match. How can a player judge an umpire's decision? We umpired well. People can write anything.

The third Test ended in a draw. It was a match Imran thought Pakistan would have won but for many dropped catches. Among the legacies of series like this one was the introduction of neutral umpires, and the friendships that developed again once the state of affairs changed.

Ramiz Relations developed later on, once the neutral-umpires system was in place. I have always been friendly. I am not the type who will keep it with himself forever. It was part of a growing-up of the game and individuals.
Wettimuny The umpiring was pretty bad on both those tours. I believe we as players can contribute to changing that. I believe I did make a contribution by walking.
Felsinger After the match, the best player you could meet was Imran. On the field he was a different man. Off the field he was a through gentleman. After that match I have never met Imran. We wished each other goodbye and went off.

Imran Khan quotes from All Round View (Chatto & Windus, 1988). Sidharth Monga is a staff writer at Cricinfo