'After you get a hundred you really learn how to bat' 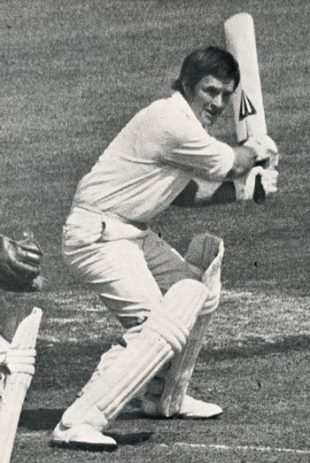 My love for the game started with watching my father play club cricket in Birmingham. I then played alongside the other kids. Finally I went to Edgbaston, where I got a contract at the age of 15.

As a boy, during the summers I played cricket. In winter I would work in our family-run tyre business. My first job, at 15, was to go down with the driver on Monday morning, pick up these punctured inner tubes, tie them up and bring them back to the factory. Then I had to break the ice on the water tank, blow up the inner tubes and put them in the tank to find the puncture spot. Then I'd patch them up, put in a new valve, recheck by immersing in the tank, and then back to the truck. It was a good education.

After you get a hundred you really learn how to bat: you suddenly are playing shots you thought you never could. You learn about yourself, about what you can and can't do.

In 1973 against New Zealand I scored a century, and also ran out Geoff Boycott. When I came back to the dressing room, he wouldn't talk to me. He told Raymond Illingworth, the captain, that he was going to run me out in the next Test match. In the end Illingworth attempted a truce, warning Boycott that he would never play for England as long as he was captain. After some time Boycott agreed that he would not run me out on purpose.

I was a slow starter and it took me long to come to terms with international cricket. I was nervous and kept failing and wondered if I was ever going to make it.

English cricket has become more professional. Michael Vaughan's Ashes-winning side was one of the best of all time.

In a tour game in 1976 I ducked into a bouncer from Michael Holding. I lost my confidence against fast bowling then. I came to the conclusion that there was only one way to play, like Kenny Barrington and Ian Chappell - back and across - and changed my stance. I was successful with the new stance, scored runs in county cricket, came back in the last Test, at the Oval, and scored a double-hundred on a very good wicket - a match in which Michael got 14 wickets.

Illingworth and Mike Brearley were the two best captains I played under. Illingworth was a great tactician and a master at getting the best out of his team. Brearley was a very good student and thinker of the game.

When I went to play in the Packer series I saw that there were about a dozen fast bowlers, all bowling at 85-90mph. Since I had been hit recently, I thought about wearing a helmet. I spoke to Tony Greig, Alan Knott and Keith Fletcher, and they said, "Why not?" So I wore a motorcycle helmet made of fibreglass. It was heavy and hot when I wore it for the first time. My head was thumping and the sweat was pouring down - I thought I was going to pass out. That's how the helmet era started.

I would like to have scored more runs against Australia.

Sometimes you can't play the game you want, especially when the side is not batting well, because you need to be responsible then.

I was too much of a theorist, but I always came back to basic technique. Why didn't I just stay as I was instead of messing around with my technique?

A top-class player should dominate when you need him to.

I was brave but lacked confidence in my ability to tackle short-pitched bowling. I should've been tougher on myself.

Once, I was all at sea against Derbyshire and was struggling to understand why. When I told Eddie Barlow, the Derbyshire skipper, about my doubts, he said: "What about watching the ball from the hand?"

Nagraj Gollapudi is an assistant editor at Cricinfo. This interview was first published in the print version of Cricinfo Magazine in 2006