'I didn't ever want to come out of that zone'

March 2009 in Napier is a time in life Gautam Gambhir happily transports himself back to. There is an unmistakable glee in his eyes when he talks about his match-saving 643-minute marathon, for just 137 runs. No man has batted longer in the second innings in 10 years. It is the fifth-longest effort in second innings in all Test cricket. By his own admission an impulsive man, Gambhir looks back at the three days of his most uncharacteristic innings. 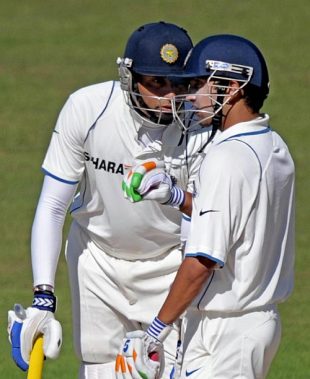 Do you remember exactly how many minutes and balls?
Ten hours and some minutes. Balls I don't remember.

You have played long innings before. You have scored double-centuries. But you score double-centuries in, say, eight hours, sometimes less, here you played 11 hours for just 137. Did you think you could play that kind of innings?
I had it in me. It used to hurt me that people thought I didn't have the technique and the temperament to play Test cricket. Scoring three double-hundreds in first-class cricket, obviously I had something in me.

What was the feeling when you went in to bat the second time, after making 16 in the first innings?
It was very difficult, batting two-and-a-half days to save the Test. I always thought it was a matter of taking it one hour at a time. Taking it one drinks break at a time, and then playing till the next break. If I had thought that I had to bat two-and-a-half days, I would never have been able to do it.

What was the longest innings you had played till then?
Must have batted for one-and-a-half days, that's about it.

Going back: day three, stumps, Viru was out already. What were you thinking in the evening? What did you do that evening?
I remember, I called up a very close friend and told him I had a very strong gut feeling that I was going to bat for two days. It was very instinctive. I was batting on 20-something. I got to the room and just called him up. He said, "It's not going to be easy." I said, "I know, but somehow I am getting the feeling that I will be able to save this Test match." Then it just happened.

The score moved slowly. In a normal innings you have milestones - say, 25 runs, 50 runs - where you switch off and come back on. What was it here? Runs couldn't have been, because you were scoring 12 runs an hour.
If I had said I had to bat through two-and-a-half days, it wouldn't be possible. As I said, I broke it down to drinks breaks and then session breaks. At one point I was taking it five overs at a time. Five overs, then five overs, then drinks would come. So I had to break it up into very, very small goals. That's how it worked.

During the long partnerships with Rahul Dravid and Sachin Tendulkar, did you talk much?
There was a time when I was batting with Sachin when I scored one run in about an hour. I got stuck for one-and-a-half hours. I wasn't even in the zone of scoring runs. I wasn't looking to score runs. I don't know why. So I told Sachin, "First of all, I have got stuck. For one hour I haven't scored a run. On top of that, I am not even looking to score runs. It's a completely new place for me to be in." He said, "Sometimes what you are doing for the team is much more important than your personal goals. I think this innings will take you to another level. Don't think about your individual score, just think about the team. Maybe this innings will be the best you have played for India, and this could be the best anybody can play." That helped me concentrate harder and keep myself in the zone. Otherwise I was on the verge of losing concentration and trying to break the shackles.

When you were playing like that, do you realise that you have not scored many runs and if I you were to get out in three hours you would have scored only 40, and the team would not be in a much better position?
But we were looking to save the Test, not win it. If we were looking to win it would have been a crime.

"I remember I called up a very close friend and told him I had a very strong gut feeling that I was going to bat for two days. It was very instinctive. I was batting on 20-something then"

But still, if you are scoring faster you know you have at least erased the deficit. This way, you are taking a big risk, so to speak
We were so much behind that it was immaterial. And time was equally important. Reducing the deficit was important, but I decided time was more important.

Before lunch on the fourth day, you stepped out and hit Daniel Vettori over the infield twice in one over. Was that a release of tension? Because they had bowled a couple good overs leading up to that.
I got to 50 by stepping out and hitting Vettori. I also remember I stepped out and hit him over midwicket when I was on 98. I was getting nervous, and that milestone was distracting me from the main goal. So I wanted to get it out of the way as soon as possible.

When you start out on such an innings, you say, "Okay, let's see. Then you have played five or six hours and you think, "Wow, it's possible." Does that mean more pressure?
Exactly. I thought, "Okay, let's see." After four or five hours, you think, "Look I am set, I can do it, I have done half of it." You get more nervous because it's a possibility, but with me, it made me more determined.

They must have tried to lure you. Attacking fields. Flighted deliveries.
There were times with five fielders around me. There was a lot of temptation, but I was playing completely out of my skin.

Did they try to sledge you?
No they didn't. New Zealand is one team who never sledge.

Did you feel physically tired? Did that affect you at any time?
After I got out, I was physically exhausted. When I was playing, I didn't feel a thing. I was so much into it.

Anxiety in the 90s?
Oh, in the 90s I am usually very anxious. I just wanted to cross that milestone. And also stumps was approaching. I needed to just get it out of the way.

What did Sachin tell you after you reached your hundred?
The best moment was when he hugged me. It is the best moment of my career.

How did you spend the fourth evening?
I was so exhausted after the end of the day's play, I went back, ate and slept. The only thing was the next day. 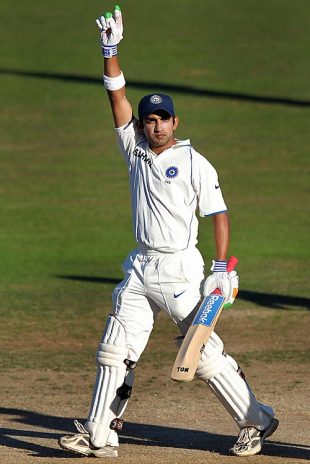 "If someone asks me if I can do that again in my life, it's an absolute no" © Getty Images

Could you get sleep?
What happens is, when you are very tired you don't sleep well. I managed to sleep, but I got up very early. The only thought was how I had to bat the whole day.

Throwdowns, nets?
I don't do throwdowns. Just hit a couple of balls. If I am middling them, it's fine.

Fifth morning. Did something inside you say, "Okay it's easy to hit a quick 50, we are almost there"?
Never. The only thought was that I had to bat as long as I could.

What was your favourite phase of the innings?
I remember I was in that zone. I was batting with Laxman and I didn't utter a word. I never wanted to come out of that zone. I was so much into that concentration. It was so high when Sachin got out on the fifth day and when Laxman batted with me, for one and a half hours I didn't say anything. He said, "Why aren't you speaking?" I said, "I am in that zone, I am fully concentrating on the ball. I don't want to come out."

Was that the best you have felt on a cricket field?
Absolutely. There was only one thing in my mind and that was the ball.

Viru called you the best opener since Gavaskar.
Had anyone else said that I wouldn't have taken it seriously. But coming from him... he must have seen something. It matters. It made me happy.

How did you celebrate that day?
I was very happy. Laxman came up to me and told me it was the best Test innings he had ever seen. Coming from these greats it makes you very happy.

How do you look back at those three days?
If someone asks me whether I can do that again in my life, it's an absolute no. It just happens. That zone just happens. Anybody would say no.