'My compulsive hitting let me down'

One of Pakistan's first Test keepers talks about his key innings, keeping to the likes of Fazal Mahmood, his favourite keeper, and more 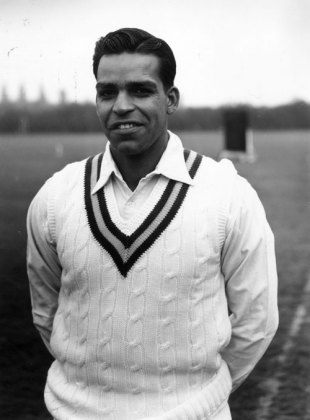 I was a compulsive striker of the ball. I joined my first club, Ravi Gymkhana in Lahore, when I wasn't yet 12. The other kids and I were not given any chances in the nets; our job was to retrieve the ball. We would come to the nets before the scheduled time, and since time was precious, some strange rules were set. The off stump was moved a few inches further from the middle stump so that the batsman had to play at the ball more often. Also, if a batsman missed a bouncer at a reasonable height, he would forfeit his turn. So one had to hook all the rising deliveries. And these habits stayed with me.

Batting on matting wickets was a great learning. It got you used to variable bounce and movement. On our first tour of England, in 1954, we mostly encountered sticky wickets, but we were able to adjust well thanks to the matting experience.

While keeping wicket, I always preferred to gather the ball by running rather than diving. You're prone to lose sight of the ball when you dive, and I only dived when I had to.

In our days there was almost no coaching, and you learnt your trade yourself. The only formal coaching I got was in 1950, at Alf Gover's school in London, where I was sent with a few other Pakistani cricketers. England's former great wicketkeeper Herbert Strudwick gave me some very useful tips and corrected a couple of flaws in my glovework.

My compulsive hitting let me down on many occasions. In my very last Test innings I got out on 98 flashing at a wide ball outside the off stump to be caught in the slips. In a side game against the MCC in Bahawalpur in 1961, I was on 99. The field was spread but instead of trying for a single, I went for a lofted one and was caught in the deep.

On the 1954 tour, initially the attitude of the English press and public towards us was sympathetic. We were regarded as the babes of cricket, on a learning visit. Some even thought we were one of the states of India. It all changed to admiration after our victory in the Oval Test.

Hanif Mohammad had a great temperament. He never lost his composure and didn't care what was going around him. Even if I had scored 25 out of 25, Hanif carried on in his own unhurried style.

My most memorable innings came against West Indies in the Bridgetown Test of the 1957-58 tour. We had followed on. It was our maiden Test against West Indies and already there were shouts that it was a mismatch. So the pressure couldn't have been more. Hanif and I resolved to put up a determined fight. Our opening stand had gone past 150 when I was wrongly given out lbw on 91. But we had provided a platform. The other batsmen gave Hanif (who made 337) great support and we managed to draw the Test with great credit.

There is a lot of talk about the pioneer of reverse-swing, but the first bowler I saw reverse-swing the ball was Khan Mohammad.

The appointment of Javed Burki as captain for the 1962 England tour was the major reason for Pakistan cricket's first real failure. His behaviour during the tour was very snobbish. He had made his Test debut only two years before, and lots of players were senior to him, including myself and Hanif. Burki's father was a serving General and a right-hand man of the then president of Pakistan, Field Marshal Ayub Khan. That was the sole reason for his appointment.

I batted for Pakistan from No. 1 to No. 8, as asked by the captain or manager, and never complained. Mostly I was asked to open the innings when the opposition had a fearsome pace attack.

Pakistan cricket's success in its early years owes a lot to the annual clash of Lahore's Islamia College and Government College in the Punjab University Championships. Those two institutions provided three-fourths of the Pakistan side, and those memorable games were also a great preparation for international cricket. It used to be a general holiday for all three days for the students of the two colleges and the boys would throng the ground. Since the players were personally known to many among the crowd, there was a lot of booing and name-calling. Government College was regarded as more of an elitist institution as compared to Islamia College, so the general public was also divided in their support. All this made it a real pressure atmosphere - sometimes even tougher than what we encountered later, in Test matches.

A safe wicketkeeper is always more useful to the side than a showman.

Keeping to Fazal Mahmood and Khan Mohammad from my college days proved handy. I had developed a good understanding with them. I could read from their grip what the next delivery would be. Had it not been for this understanding, I would not have taken a world-record seven catches off Fazal in the Oval Test of 1954.

Records and landmarks never bothered me. When I scored 209 against New Zealand in 1955, I got to know of all the records only through the next day's newspaper: the maiden Test double-century by a Pakistani, the first ever by a wicketkeeper in Test cricket, and my partnership with Waqar Hasan was a Pakistan record for any wicket. Someone informed me later that it was also the highest Test score by a No. 8 batsman.

There was no money in the game. I always played for pleasure and making new friends.

Back then we mostly travelled by sea and it was great fun. En route to West Indies in 1957, one evening we had a fancy-dress show on board. Opener Alimuddin, who was dark-complexioned and had heavy hips, decided to be a West Indian lady. With a wig and some stuffing in the right places, a buxom black beauty emerged. He then started to wink at a smart middle-aged gentleman, who turned out to be the Governor-General designate of the West Indies Federation, who was headed to Port-of-Spain to take charge. Later in the tour we had a sumptuous dinner at his palatial official residence.

"I always preferred to gather the ball by running rather than diving. You're prone to lose sight of the ball when you dive, and I only dived when I had to"

I didn't enjoy captaining Pakistan against the MCC in 1961-62. There was constant interference from the president of the cricket board. He used to send chits, via the 12th man and the boundary fielders, with instructions.

Fazal relied mainly on legcutters and outswingers, and most of his victims were caught behind or in the slips. On the other hand, Khan Mohammad's main weapons were incutters. He clean-bowled a lot of batsmen.

I was camp commandant of Pakistan cricket teams for around 10 years including six years in succession. I also went on a deputation of three years with the Saudi Arabian Air Force.

My favourite wicketkeeper in the early days was Godfrey Evans. Apart from his keeping skills I also admired him for his jovial and carefree nature. In recent times Adam Gilchrist has been a phenomenon. In fact, he has redefined the role of wicketkeeper-batsman.

My triple-century in 1951 for the Indian Prime Minister's XI against the visiting Commonwealth side catapulted me to stardom in the subcontinent. I was appearing as a guest player. I'm told it was the first ever triple-century by a player of Indian or Pakistani origin against an international side.

I regret that there was no limited-overs cricket in my time. My batting style suited the form and I would have really enjoyed it.

I quit wicketkeeping at all levels after being hit in the eye by a ball in a club match in Sialkot in 1951. I played as a batsman in the 1951-52 unofficial series against the MCC and Hanif Mohammad kept wicket. That arrangement stayed for the first three Tests of our inaugural official Test series, against India in 1952-53, but Hanif did not have a good time behind the stumps and the captain, AH Kardar, requested me to keep again. So I resumed and continued till retirement.

My most memorable catch was dismissing Len Hutton off Fazal at The Oval in 1954. The edge flew in an arc above the slips. I sprinted past the slip fielders and lunged at full stretch to grab the ball inches above the ground.

I served in the Pakistan Air Force for 27 years, mainly in administrative roles. I remained in charge of the PAF School of Physical Fitness in Peshawar for a number of years. Here I trained young pilots, physical instructors and sportsmen. The legendary squash player Jansher Khan was sent to the school when he was 10, and I was personally involved in the physical training and nutrition aspects, during those formative years of his career.

Coaching cricket has been my passion and I have been involved in it at all levels. My three-year stint, 2005-08, with the Pakistan women's team was the most satisfying. I was able to mould them into a side well respected in the international arena. We defeated the national sides of Sri Lanka and West Indies for the first time. I still work as an advisor at the National Cricket Academy in Lahore.