'I was very much against quotas'

The first coloured cricketer to represent South Africa looks back on making his debut at 40, the country's cricket history and the need for more Ntinis 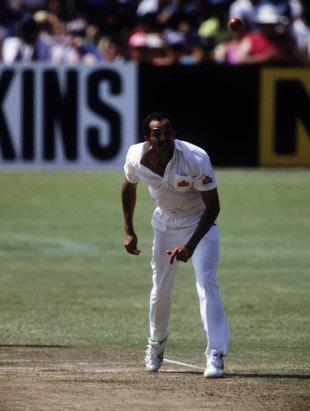 The idea of representing my country was almost non-existent. At the time I was in my 20s and it was almost impossible to think I would ever play.

When I wrote my book I made it quite clear that the bowling aspect in South Africa will come from mainly the non-white contingent and the Afrikaans contingent. I also said the batsmen would come from the coloured community and the Indian community, and that's basically our history.

When the time came there was no regret at not having had more chances to play. It was more an achievement of the impossible.

We have maintained a high standard and been competitive for the last 17 years. The national team has really achieved a lot in a short space of time, but I firmly believe there is an enormous amount to be done and it will take a while.

The fact that I was privileged and fortunate to be the first coloured cricketer [to play for South Africa] was greater than anything else. And the fact that the future generation would have a better life was even more encouraging.

We have a very interesting cricket history. We are a big country. Our cricket culture showed up in pockets: the Eastern Cape, the Western Cape, Kwa-Zulu Natal, Kimberley, and then Gauteng in the north. Cricket, in a lot of areas, is well over 100 years old and we should really focus on that to strengthen our base.

Looking through South Africa's history from Basil D'Oliveira to Omar Henry and to Makhaya Ntini, I think it shows the progress that has been made in that time.

I was hoping I would see an integrated South African side, so in that respect, for me to have played and to see that has been a fantastic experience. Everyone wanted it so badly and so quickly.

Personally I was very much against quotas, but I can understand why others insisted upon them. I feel that to a certain extent it was the right thing to do, but having said that, we could have implemented it better and maybe differently.

We've certainly made progress. Makhaya Ntini is a perfect example. But as with anything, for an action there is a reaction, and there could have been a few more Makhaya Ntinis if things had been handled differently.

Justin Ontong and Jacques Rudolph will probably be victims of the system, and that's unfortunate. Their talents aren't on the park any more.

I feel sometimes we don't value ourselves enough within world cricket and the role we play.

When you start something there are going to be problems.

There are pockets in the country where cricket is non-existent and we have to go in there. That's a long-term role. It will take patience and we can make cricket a truly national sport.

We have to look back and learn as we move forward. The last decade has been phenomenal, a fantastic journey.

The world has certainly enjoyed the presence of South Africa in the international fold. Look at the ICC, with Haroon Lorgat, Dave Richardson, Vince van der Bijl in key jobs. It tells you what this country can offer, and I firmly believe we have only touched the surface.

'I considered myself a pioneer'

Omar Henry was nearly 41 when he made his Test debut against India at Durban in 1992-93, after representing South Africa in a few rebel Tests in the mid-1980s