'I was known as Hanif's brother'

The lesser-known Mohammad sibling on being a part of Pakistan's early Test wins, knowing the laws of the game, batting against Roy Gilchrist, and more 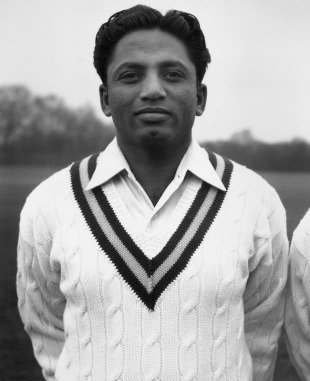 There was a sporting atmosphere at home. My mother was a sportswoman and excelled at badminton and carrom. My father was a reasonable club cricketer.

In Junagadh, as children, in the hottest weather, the only activity allowed outside home was cricket. In fact, even inside the house we were not admonished for breaking windows while playing cricket with a tennis ball.

Kardar was a shrewd tactician. He was a man of few words. He could read people's minds. He understood cricket very well: a batsman's weakness, reading the pitch, etc.

My first cricketing lesson was hitting a ball hung from a rope. We used to live opposite the Mohabat Madrassah school in Junagadh. As kids our involvement was restricted to retrieving balls from the boundary. The members of the school team had a ball hanging from a tree on the sidelines for batting practice. Unless you play with a straight bat and strike the ball off its middle, the hanging ball will not swing back to you. That was my earliest lesson. Even here at my home in Shirley, you can see the ball tied to the tree.

My brother Raees and I played for the Mohabat Madrassah school team. There was a great rivalry between our school and the Bahadur Khan High School. The two schools often met in the semi-finals or the final of the schools tournament and that day would be a holiday for both. The ties were played under a real pressure atmosphere. All this helped develop match temperament at an early age.

The fastest bowler I faced was Roy Gilchrist. Not only his pace but his attitude also frightened you. When hit by the batsman, he said, "Oh maan, I'll kill you."

Among the spinners, Subhash Gupte was a class act despite playing in such a poor fielding side.

I made my Test debut in the third match of the 1952-53 tour of India. I had made a match-saving 104 not out in the tour game versus West Zone in Ahmedabad. I got runs against Nyalchand, whom Sir Frank Worrell called the king of matting, and Jasu Patel, who took a record nine wickets against Australia a few years later.

My Test record might not be very impressive but it gives me a great sense of pride that I made vital contributions in most of Pakistan's first Test victories: I made 42 in the second innings of the Oval Test of 1954. It was Pakistan's highest in the match. We became the first country to win a Test in England on their maiden visit. In our first Test win versus Australia in 1956-57, my century partnership with Kardar was the highest of the match. In 1957-58, I scored the only century of the match in our maiden win in the West Indies.

The migration to Pakistan from India in 1947 was an adventure. My father, an uncle and I came before the rest of the family by sea. The small ship was overloaded and very unstable. All the time we feared the vessel might capsize.

I joined the Pak Mughal Cricket Club in Karachi. They had nets at the Jahangir Park. Ten to 12 clubs had their nets there every day. All Test cricketers of Karachi during that period were products of Jahangir Park.

The biggest disappointment of my career came in the second Test in Trinidad in 1957-58. Just before the match, during practice, all of a sudden a severe allergic attack made me breathless and speechless. I spent most of the Test in the hospital. In each of Pakistan's innings, I was brought from hospital

During my 42 at The Oval, early in the innings a yorker from Brian Statham hit my toe. It hurt a bit but I made a real drama out of it and deliberately started writhing in pain. A physiotherapist came on to the ground to see me. When I stood up again, I heard the England wicketkeeper, Godfrey Evans, tell his captain, Hutton, "It will be difficult for him to move the leg, so better bowl yorkers to him." Statham and Co. did so. That made life easier for me. The uncovered wicket had been badly affected by rain and even good-length balls were popping up awkwardly. The yorkers were easier to play. I continued pretending my foot was in great pain. It all helped me settle down and score.

My second brother, Raees, was the most stylish batsman among us five brothers, but unfortunately never played a Test, though he was once the 12th man.

I always fielded in the outfield. In a county match during the 1954 tour, the captain wanted to strengthen the slip cordon and I was moved there. I fractured my finger while attempting a catch. It was put in plaster for four weeks. I never fielded in slips again, and even today the finger has not fully straightened.

Kardar always had me and my brother Hanif room together, perhaps because we were the only two Pakistan cricketers in those days who thought and discussed cricket.

I worked as a banker. Cricket didn't pay much in our days. Most of my banking career was with the National Bank of Pakistan.

I was known as Hanif's brother, rather than as Wazir Mohammad. Even during my playing days, I was often introduced as Hanif's elder brother. But I never felt embarrassed; rather I was proud of him. I shared century partnerships with him during his world-record innings: 337 v West Indies (1957-58) and 499 for Karachi v Bahawalpur (1958-59).

The biggest disappointment of my career came in the second Test in Trinidad in 1957-58. Just before the match, during practice, all of a sudden, a severe allergic attack, probably from the grass or flowers, made me breathless and speechless. I spent most of the Test in the hospital. In each of Pakistan's innings, I was brought from hospital, and I made a pair. I did well on the same pitch later in the series. Had I not fallen ill, I could perhaps have contributed to help Pakistan win that Test, which we ended up losing.

My youngest brother, Sadiq, became a left-hand batsman on my advice. He was a right-hander during his early years and not a very good player. There were very few left-handers in the Pakistan team those days, plus the bowlers in the country didn't have much experience of bowling to lefties. So Sadiq had more chances to succeed as a left-hand batsman.

I was well-versed with the laws of the game. In the Kingston Test of 1957-58, when Garry Sobers made the record score of 365, the crowd stormed the ground. A patch of the pitch was damaged to the extent that a crater developed. The West Indian declaration arrived at the same time, meaning we had an awkward 90 minutes to bat that day. I told Kardar to tell the umpires that as per the laws of the game the wicket was not suitable for batting since the wear and tear was not due to natural reasons The umpires initially showed reluctance to accept our viewpoint, but eventually, after consulting the rule book, they agreed. 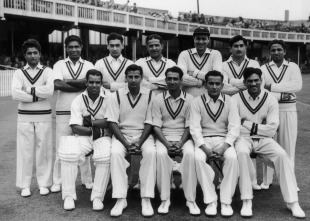 Hanif and Wazir Mohammad, standing at opposite ends of the 1954 squad to England © Getty Images

Barbados is my favourite cricket ground.The wicket is ideal for batting. The ball came at a good height and there was even bounce. The ground was small and runs could be scored.

In 1963 I was requested to lead the young Pakistan Eaglets team to England. The year before, Pakistan had had their worst Test series in England, where they lost 0-4. I had retired from international cricket but agreed in the interest of Pakistan cricket. It was a very successful tour and a number of youngsters from that squad went on to have long careers for Pakistan: Mushtaq Mohammad, Intikhab Alam, Asif Iqbal, Sadiq Mohammad, Majid Khan, and Pervez Sajjad. Apart from the first two, it was the first international tour for the rest.

I always admired technically correct batsmen. Three have been my favourites: Sunil Gavaskar, Geoff Boycott and Hanif Mohammad. They had everything - temperament, technique and determination. One could learn by watching them the whole day.

I play badminton thrice a week to keep myself fit and also do a lot of gardening.

I don't worry unnecessarily. Leave some things to God. Nature decides most things.