'I got sick of being called courageous'

Colin McDonald, who turns 82 today, looks back at the good old days, when the bowling was fierce but the sledging wasn't "Better to get hit than get out" © ESPNcricinfo Ltd

I wasn't a hooker. In my first three or four games ever for Victoria, I got out hooking. Then I realised I couldn't hook, so I stopped. Against England one time, Fred Trueman bowled me a no-ball bouncer and I knew that I had a free hit - but I couldn't hook. It was coming straight at my head. So I swiped, it hit the middle of the bat and it went for four. But if I missed, I was dead.

For bouncers, I used to duck under them. Wes Hall was a little bit different because while you had time to duck, he used to get a lot of lift off a much fuller length, so you couldn't regard a lot of his deliveries as bouncers. You had to play them, and you'd get hit a lot of times in the body, sometimes deliberately by me. Better to get hit than get out.

I got sick of being called courageous. I wish someone had said I had a certain amount of ability.

Wes gave you a little bit you could score from, while he was hitting you with the ones you didn't score from. There were no helmets and not much in the way of protection. But he was a pretty good bloke.

We were always on good terms with our opposition, whoever it was. Sledging was an abomination. It just didn't happen. Now it's apparently standard practice. It's a bit of a shame. Although Jim Burke wasn't slow in saying what he thought when Frank Tyson was bouncing him. Frank didn't do much about it except to give him more. I told him "Well bowled," because I didn't want them.

When I got a couple of back-to-back hundreds against England in 1959, I was batting as well as I'd ever batted. I was in good form. It was like I think I would have been had I played today, because we played a heck of a lot of cricket in three or four weeks. The 170 I got in Adelaide was probably my best actual batting. I threw my innings away but had fun while I was doing it.

Englishmen, to their credit, did walk. I did, but basically we [Australians] didn't. I think it's wrong to stay if you know you're out. My thinking is that if an umpire knows you walk, he'll give you not out if you haven't walked, so you get more good decisions. But it's totally different thinking these days.

I would let umpires use technology as much as possible now, if it means you can get correct decisions.

I went to England three times by sea. You're away for seven to eight months, for which you got 1000 Australian pounds. It didn't go far, if you have a wife and kids and are away for eight months. We went first-class and first-class by sea was excellent. You don't need much money on a ship. We used to drink a lot of beer. A week's beer cost you about two or three pounds, and it was about threepence a glass. You'd get off the other end not particularly fit but you'd had a great time.

The best innings I ever played was against Laker at Manchester. And my first innings of only 30-odd runs was not far behind. I batted for days against Laker in the second innings. Runs were of no significance whatsoever. All we could do was get beaten, which we did. But I almost got Australia into a position where there was a vague chance we might save it. It was a mud-heap. It was ridiculous that Lock, who was exactly the same sort of spinner except he used the other hand, got one wicket while Laker was getting 19. I can never explain that. Lock was different to Laker temperamentally, and Laker didn't bowl a bad ball.

It took three days to fly to the West Indies. That is embedded in my head. We went from Melbourne to Wagga Wagga, Sydney, Nadi, Kanton Island, Honolulu, San Francisco, Vancouver, Calgary, Regina, Winnipeg, Toronto, Nassau, Camaguey, Montego Bay, then over the hills to Kingston. That took over three days. And we were nearly killed, coming in to land in Vancouver.

We played on a canvas matting in Karachi, and it was very difficult. The ball came off very slowly. There was no speed in it so you could stay in, but it was damn hard to score, against bloody good bowlers. Fazal Mahmood was a great bowler.

There was a match where I just agreed not to play, to give John Rutherford a Test match. That would never happen today. That was in perfect conditions, and I missed out on those.

My brother Ian was the team doctor in India. He may well have saved a life or two amongst us. Four of them were very sick with hepatitis. He probably saved Gavin Stevens' life.

I had a new Mini-Minor van with a very stiff gear-lever in England in 1961. My wife was in England with us at that time. I really got it for her, but whenever I was in London we stayed in a flat we had there and I used to drive this thing a bit. It was damned hard to change gears and I got RSI. George Thoms, my club opening partner, who I debuted with, was in England as a doctor and he performed an operation on my wrist. It hurt too much to hold the bat. I hardly played again.

"Englishmen, to their credit, did walk. I did, but basically we [Australians] didn't. I think it's wrong to stay if you know you're out"

The most memorable innings personally was getting 91 runs in front of 90,800 people at the MCG. I would rather have got a hundred, but I can still dine out on the fact that I got one run for every thousand people there. That was memorable, because of the huge crowd.

We retired earlier. Today if you're getting a million-plus, they play on - why wouldn't you? - which has an unfortunate effect of making it pretty hard for guys who are 19, 20, 21 years old to break in to Test cricket, whereas we did have that opportunity.

I had a total of 15 baggy greens and gave the whole bang lot away! I've got one back now. One of them was left at a Caulfield cricket pavilion. I gave it to a kid, who left it there, and a woman picked it up and was kind enough to send it to me - and I gave it away again! Even though you were absolutely proud to have them, memorabilia had no value.

I should have done better in India and Pakistan. I had a very good Test match in Kanpur, but we got thrashed. From a cricketing point of view I wish I'd never gone there, but from an educational point of view I loved it. India was a marvellous country.

I thought I might become a federal politician. I stood for pre-selection once but got beaten by Tony Staley, who became a minister. But I was not prepared. I know a lot more now than I did then. My politics have changed. I was enthusiastically Liberal; now I've gone a long way down the left-wing track. I'm older and I think wiser. I just think we're in wars for the wrong reasons. You never win a war.

I think I did a good job for Tennis Australia as executive director. Without the National Tennis Centre we would have lost our grand slam status. I had a lot to do with the fact that we got the Rod Laver Arena. I was happy with what I'd done. I wasn't a tennis person, but I think tennis got their money's worth out of me.

I'm a pensioner. I'm a university graduate and well educated, but I played Test cricket and for most of my 20s and early 30s I virtually didn't get paid. I had a job but it wasn't highly paid because you found it hard to get time off to play cricket. I'd be a multi-millionaire if I was playing today.

Brydon Coverdale is an assistant editor at Cricinfo 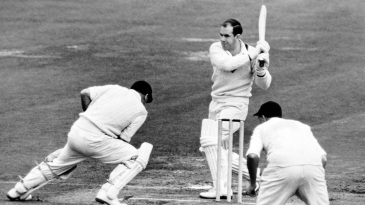