'Modern cricketers should be grateful to Kerry Packer'

The former Pakistan captain on how he turned from bowler to batsman, why he masterminded the Sharjah tournaments, his leadership regrets, and more "I was often called the man for a crisis. Pressure situations brought the best out of me" © PA Photos

I migrated from India to Pakistan in 1961. It was a family decision. My older brother had already shifted to Pakistan. I had been making a name for myself in Indian cricket, but I was confident that I would be able to further my cricketing ambitions in Pakistan as well. I encountered no difficulty in settling down in Karachi.

My uncle was the former Indian offspinner Ghulam Ahmed. He was not the only cricketer in the family. Many of my other uncles also played first-class cricket.

My big hundred in the Oval Test of 1967 was crucial for my career. When Pakistan were eight wickets down for 70-odd on the fourth day, there was talk of a 40-over match to entertain the crowd. That motivated me.

Javed Miandad is my favourite cricketer. He is the most gifted batsman I have seen, He had amazing self-belief and could take on anyone.

I was wrong to put West Indies in to bat in the 1979 World Cup semi-final on an excellent batting track. That decision probably cost us a spot in the final.

From 1964 to 1967 I was primarily a bowler who could also bat a bit. I opened the attack and batted mostly at No. 8. The roles were reversed after the 1967 tour of England.

My innings of 120 in the 1976-77 Sydney Test was my finest batting performance, as it played a major role in Pakistan's first Test win in Australia.

Joel Garner was the most difficult bowler I faced. It was extremely difficult to pick his length because of his great height.

Before the 1967 England tour I developed a back problem. I knew I could no longer play just as a bowler, so I was determined to do well with the bat. In the first Test, at Lord's, my 76 helped Pakistan avoid the follow-on and draw the Test.

My greatest disappointment was not being able to deliver as Pakistan captain.

When I was named the Wisden Cricketer of the Year in 1968, I didn't know such a thing existed.

Playing for Kent from 1968 to 1982 was a great experience. I played with a number of stars, including Colin Cowdrey, Alan Knott, Derek Underwood, Mike Denness and Bernard Julien among others.

"Javed Miandad is my favourite cricketer. He is the most gifted batsman I have seen. He had amazing self-belief and could take on anyone"

Pakistan suffered so many narrow losses in the early 70s because we were not used to winning: Leeds 1971, Melbourne and Sydney in 1972-73, and the World Cup 1975 tie against West Indies. The players got excited and failed to concentrate on the job at hand.

Mushtaq Mohammad was the best Pakistan captain I played under. He was not only a shrewd tactician but also moulded a talented bunch of players into a single unit. He inculcated a winning mentality in them.

During my county career, in the winter months I worked for Thomas Cook. I arranged supporters' tours for sports events.

My stand of 190 with Intikhab Alam at The Oval was a world record for the ninth wicket. That brought me instant fame and cemented my place in the Pakistan team. It also got me a mention in Wisden. I was promoted to the middle order and received offers from quite a few English counties.

Pakistan's performance improved with every England tour I made with them. This was because a number of Pakistanis had joined the county circuit in the late 60s and early 70s. The experience honed their skills and made them professional. So in the 1975 World Cup, Pakistan were one of the favourites.

I was twice overlooked for the captaincy when Intikhab Alam was removed - in 1972-73 and in 1976-77 - despite being his deputy both times. At the time it didn't bother me since my only passion was playing. But in hindsight I was hurt because I always thought I was being groomed for the big job. Still, I had the honour of captaining my country in the first two World Cups.

I led Kent to the joint county championship in my first season as captain, in 1977. But the next season I was removed from captaincy because of my contract with Kerry Packer. I captained them again in '81 and '82 but didn't have any success because by then I had retired from Tests and wasn't as enthusiastic. The wound of being unfairly removed after 1977 had not fully healed too.

My only Test series as captain was against India in 1979-80. We were beaten by a better side. The umpiring was not up to the standard in a couple of Tests but overall India played better and deserved to win. 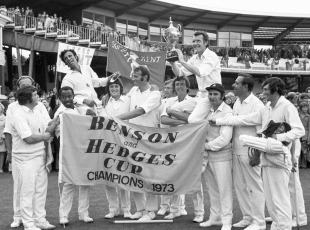 I was the coordinator for the Cricketers Benefit Fund Series (CBFS) in Sharjah. I knew what it was like to play for no money, and later for substantial amounts. I felt those who had played before my time deserved better lives. I requested Abdul Rahman Bukhatir to start a series that would monetarily benefit retired cricketers. During the initial years only subcontinental cricketers were nominated, but later cricketers from other countries also benefited from the CBFS.

Present-day cricketers and administrators should be grateful to Kerry Packer for not only making cricket a better paid game but also for the innovations he introduced. Even playing in county cricket didn't give you as much. Playing in the Packer Series made us better cricketers, as we played with and against great cricketers. I feel proud to have led the Rest of the World to victory in the Super Tests and one-dayers against Australia and West Indies.

I was the 100-metre sprint champion at school and college, which helped me become one of the fastest runners between the wickets.

Before I joined the English county circuit, I was an amateur. Experience on the circuit made me professional: my behaviour, thinking, eating and sleeping habits all changed. And because of that I played more useful innings for Pakistan in the latter part of my career.

The 1978-79 India-Pakistan Test series was significant for Pakistan cricket. India-Pakistan cricketing ties had been revived after 18 years. It was a period that saw two wars between the two countries. For the first time, matches were televised live all over Pakistan. And there were those two nailbiting wins for us in the last two Tests. All this made cricket the national passion.

I was often called a man for a crisis. Pressure situations brought the best out of me. When you are playing in a team sport, your role is to help the team win - or not lose. Most of my big scores came when trying to save or win matches for Pakistan.

"The IPL is supplementing this new phenomenon of Twenty20: money before cricket. There is more talk about rupees and dollars than runs and wickets"

CBFS ended due to a number of reasons. India and Pakistan started playing each other more in other parts of the world. And the increasingly crowded cricket calendar made it harder to have three or four teams, including India and Pakistan, playing in Sharjah. The interests of the administrators, especially Bukhatir, moved to new ventures like private television Yes, there were also allegations of match-fixing during Sharjah games, and the ECB set up an investigation team, but they didn't find any evidence.

I served as an ICC match referee for many years and also as an ICC ambassador to promote cricket in associate countries. In those days the appointment was from tour to tour. Nowadays it is a full time job.

My long career with Kent made me fall in love with the county, and I decided to settle down here. I am an honorary life member of Kent, as well as of the MCC.

Being an optimist is my best attribute.

Eden Gardens and the SCG are my favourite grounds. They have awesome atmosphere and huge crowds.

Twenty20 cricket is still evolving. Though it does not have much to do with cricket in pure technical terms, it is the demand of the industry. And cricket is an industry. It has already become the most popular format with the new generation and has even lured the ladies to grounds. It has all the makings of being the future. But I, personally, don't want to see that day.

These days I work as a sports coordinator with ARY Digital, a popular Pakistani TV channel, in their London office.

The IPL is supplementing this new phenomenon of Twenty20: money before cricket. There is more talk of rupees and dollars than runs and wickets.