"Peter May was the best post-war English batsman I saw." © Wisden Cricket Monthly

The game was extremely popular in England in those days. Television, which came to India much later, was big there even at that time. Wherever I went I was recognised as the wicketkeeper.

We enjoyed the long tour. I was a teetotaller and they used to respect it in England. Fortunately I was not vegetarian and did not face too many problems.

What struck me initially was that the crowd would clap for a maiden over. A good piece of fielding and a good throw was appreciated. Everyone applauds fine batting strokes but seeing sharp fielding appreciated showed how knowledgeable the crowd was.

Frank Chester was one of the greatest umpires I have seen. There was no bias at all against us among the English umpires.

Peter May was the best post-war English batsman I saw. Vinoo Mankad [slow left-arm] used to bowl a floater which used to come in with the same action instead of breaking away. Peter was batting [at Lord's] when Vinoo bowled the floater on middle and leg. I knew the ball would come in, but I also understood that the great batsman that Peter was, he would pick it and try to glance it. Any other player would have blocked it but Peter glanced and I caught him down the leg side. At the end of the over, umpire Chester came running towards me from square leg and said,"Well caught."

"What a fine wicketkeeper you are. I am surprised you weren't selected for all the Tests," Chester told me later. That was a great compliment, but it was decided before the tour by the selectors that I and Khokhan Sen will play two Tests each.

I once met the UK Deputy High Commissioner in the '70s. He asked me whether I had lofted Douglas Wright [England and Kent legspinner] for a six in Canterbury. "The ball came to me in the crowd," he said.

Godfrey Evans was an excellent keeper; whether it was diving, standing up, moving down the leg side, everything was well-timed.

I got 50-odd in one of the tour games, and two girls came up to congratulate me after the day's play. One of them pointed out my peculiar way of plonking my front foot forward and asked me why I did so. I must have subconsciously copied this style from DB Deodhar, but no one had ever pointed it out to me before. That is how closely people watch the game in England. The grounds used to be full, even for the county games.

Fred Trueman was really fast, especially for us, as we didn't get such fast bowling in India. And to think that it was his debut series.

Our tour allowances used to be meagre but the value of the rupee was also quite a lot then. To put it in perspective: when I was in college I had a lot of hair and used to get it cut for four [pauses] not rupees but annas [16 annas made a rupee]. Today there is no hair left but the cut costs Rs 60. We used to get about Rs 60 for five days of cricket. We were not professional back then; it is only now that the players are contracted. We were just happy to be representing India. It was a great honour. The idea of money was not there at all. Merchant and I received the same amount. There was no difference between what the top players got and what the others got.

Vijay Merchant and Vijay Hazare were of the top class and on par. Hazare, Vijay Manjrekar and Phadkar were very good players of the hook. Pitches in England were covered only for the Test matches, not for the county games. The ball comes slowly off a wet wicket, but when it is drying it gets very difficult. It bounces, turns, shoots, skids; it all depends on the different patches on the surface.

You were selected for your respective place in the side and no one bothered about things like practice. It was entirely up to you. Our own bowlers used to bowl in the nets to our batsmen. There were no county bowlers available for practice.

I was having breakfast at a Norwich hotel when a lady came up to me and asked if I was an Indian cricketer. She chatted for a while and asked me to say hello to her little boy. "I want him to know that the colour of the skin may be different but all people are the same," she said.

Alec Bedser had a normal incoming delivery and a legcutter. I was facing him when Dattu Phadkar told me that the ball pitching on leg stump will be the legcutter. He used to bowl it with the same action and it was very difficult to pick.

I was speaking to the Worcestershire groundsman about the nature of the wicket when a girl came and asked me what I was doing alone - everyone else was dancing merrily in a party in the pavilion. She asked me to dance with her but I politely refused. She was disappointed as she was sure I would relent. I later came to know that some team-mates had a bet with her to get me to the dance floor. I didn't dance on the entire tour.

The concept of fielding was not given any importance then in India. Once, in the Bombay Pentangular, Muslims were nine down and needed four runs. I was fielding on the boundary, and kept a stroke down to three. Next ball, KC Ibrahim pushed to covers. Shute Banerjee, the fast bowler, just had to pick up the ball and throw, but he didn't, allowing the batsmen to get away. "I am a fast bowler; I am not expected to throw," he said. No one bothered with fielding, it was only batting and bowling. If one dropped a catch, nobody said anything, even the bowlers.

The basic job of a keeper during those days was keeping. They were usually sent to open the innings and take the shine off the new ball. I remember a game where the keeper opened and batted the entire day for some 30-odd runs.

A keeper has something else to do apart from catching and stumping. I understood this in a charity match under CK Nayudu. A few overs after the start, CK came to me and asked whether I was observing what the bowler and the batsman were doing. I realised that keeping is also about being friend, philosopher and guide to the captain. This incident helped me when I led sides later. 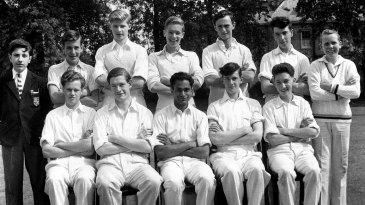 Sailing with the stars

A journey across the seas and time - with cricketers for company