'There's nothing that comes close to Test cricket'

Eleven years into his career, on the eve of his 100th Test, one of Sri Lanka's all-time greats looks back 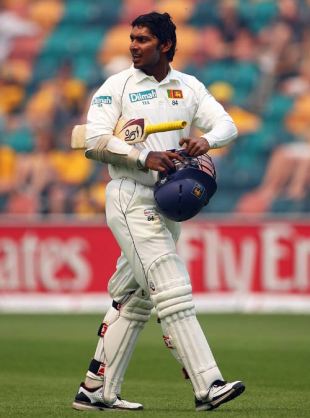 "I shook my head about the decision [in Hobart] at the time, but that is the beauty of cricket - some days you get a reprieve, other days you don't" © Getty Images

I was very proud to play my first Test match. I didn't know whether I was the most deserving guy to play that Test match, really. I had a good one-day series when I debuted for Sri Lanka against Pakistan and South Africa, and then to get into the Test side ahead of Romesh Kaluwitharana was a surprise but also very satisfying.

In that first Test I found out very quickly that I wasn't really good enough to consider myself a Test batsman, so I needed to work very hard very quickly to be able to find my feet.

It is unsatisfying to play so many two-Test series. As a Test country you need to play three- to five-Test match series as much as you can. I don't think five-Test series are attractive anymore to TV networks, but I think Test series should be a minimum of three matches. I hope the ICC can stipulate that. I don't know if they can.

The time I felt ready as a Test cricketer was probably when I made my first hundred, against India. I had had a good second series, in South Africa, which allowed me to have a bit of confidence as a batsman, but then I came back and scored my first hundred, which was important. Getting to that hundred really shows you… you've got a Test hundred, so now you know how to do it again.

The first hundred was quite a struggle. I didn't start batting well until I was about 75 or 80. The last 25 runs were probably my most fluent, I finished 105 not out and had to get there with Murali batting as the last man.

Every single victory we've had has been immensely satisfying. It is hard to pick one particular game. Every match we played in and won has been brilliant.

When I was captain, we had Murali at important times in Australia and for the World Cup, we had him for the T20, but there were various times when we played without him and we still managed to do really well. And before my stint, in Mahela's stint as captain, it was a case of building again. Vaasy was not a regular member of the side, Sanath was not a regular member, Marvan [Atapattu] wasn't there anymore. So we had to look for players to try to take those places. In the last four years we've lost two of our most successful bowlers. It does put extra pressure on the batsmen, but that's the pressure we should be able to manage and take on.

Everyone made me feel welcome when I started out. We had a great team culture. Everyone was playing for each other, and advice was very free. Every single team-mate, whether it was Arjuna Ranatunga, who was playing his last series, to Mahela [Jayawardene] or Russel Arnold, everyone was very easy to chat to. The environment has been great throughout. We've always had dressing rooms where there's no seniority or gaps between players. Everyone is most welcome, everyone is on an equal footing, ideas are given equal weight, and opportunities in any way, cricketing or otherwise, are equal to the entire team, so the team culture is very good.

The matches against South Africa [in 2006] were very good. I watched Mahela score a brilliant hundred in the fourth innings to win us that Test match [at P Sara Oval], and before that we'd put up a great partnership here.

Test cricket is still, to my mind, the most important form of the game out there. There's nothing like it, there's nothing that comes close to it. This is the only arena where you can really make your mark as a cricketer. If you are successful at Test cricket, that is all that matters, I think.

"I only thought of myself as captain when we fielded. When we were batting I just played as freely as I could as a batsman. It was something I really tried to consciously do, because I needed the separation"

Purely as a batsman, there are two innings that spring to mind. Coming back from injury for that Hobart Test against Australia in 2007… I'd missed the first Test with a hamstring injury. I got about 60 in the first innings. I was a bit rusty, but going into the second innings and hitting the ball continuously was probably one of my best innings.

Then I came back to Sri Lanka for the first Test in Kandy against England. Getting 92 and a 150 in the second innings was great.

In the end in Hobart we only lost by some 90 runs. It would have been interesting to see how close we could have got. I shook my head about the decision [Sangakkara was given out caught off the shoulder and helmet] at the time, but that is the beauty of cricket, really - some days you get a reprieve, other days you don't.

I've always enjoyed batting with Mahela and watching him. He's been brilliant for Sri Lanka and I've enjoyed being a part of that experience.

As a captain the one-day series against Australia [late in 2010] was great. Most of the things we planned and tried, we did, except for the last one-dayer, and for the first time in our history we managed to beat Australia in Australia. So that was very satisfying.

In the game you go in with plans, and it is nice when they work. Sometimes they don't and you have to go back to the dressing room to find new ones to go back out with. You also need to have the players who can execute those plans, and have players who believe that they can. I've been very lucky to have them. But at times there are certain things the opposition does that you can't counter, and that is why the opposition players are as good as they are. Every once in a while you get a game where you think you have it but it turns out that you don't. That is the continuous tug of war between good players, to try to get that advantage. Some manage to get it and keep it, others can lose it.

The match I would like to have again is probably the Tamil Union Test match against India. We were in a strong position in the first innings, really bad in the second innings. We had a glimpse of victory when we had them 49 for 3, but then [VVS] Laxman scored a magnificent hundred to take it away. Probably there were a few things maybe I could have done differently in that Test match to try to change things around. But you never know, Laxman could have still got a hundred and still beaten us.

It wasn't that difficult balancing my roles when I was captain. I only kept in one-day cricket, I didn't keep in Tests, so it was a case of being as fresh as I could be every time I went in. I only thought of myself as captain when we fielded. When we were batting I just played as freely as I could as a batsman. And that really helped me, to separate my roles and to perform as well as I did. It was something I really tried to consciously do, because I needed the separation. You can't have your captain's hat on 24 hours a day, it doesn't work. You need to be able to have a fresh perspective every time you go out, so I was lucky to have that.

In the Cowdrey lecture I wanted to get across as strong a message as I could about my country, about our people, and how proud I was to be Sri Lankan. And show them how we as a people have been resilient and optimistic, and that we've managed to show through our cricket who we really are. I discussed it with my father, and with Charlie Austin [my manager], and it was a nice collaboration where I was sitting down, penning my thoughts and putting them together as I went along. By happy chance it came out well.

I am a No. 3 batsman without doubt. I've done the best there, and I hope to achieve everything more in the same manner, by being as successful as I have been. It was nice to become the fastest player to score 8000 runs in the history of the game, so maybe there are a few other things I can do as speedily as that.

Daniel Brettig is an assistant editor at ESPNcricinfo

The all-round art of Sangakkara

Balanced yet intense, ruthless in his need to succeed, always contributing to his team's cause, he is among the finest cricketers Sri Lanka has produced