'Cricket can teach you all about life' "I just walked away and didn't bother about what some people do: make a big fuss and bother about retiring and that sort of thing" © PA Photos

I was a partner in an accounting firm and had to work very hard to keep my clients happy before I went on tour. Then you worked your butt off when you got back. The partners were very good that they did that. The clients suffered, but they were very supportive.

My father was a schoolteacher. He was pretty keen on sport and cricket. My mother was athletic as well. I used to hit the ball in the backyard into a volley board which was there for the tennis. I used to try and hit it hard in there. I developed a bit of a love of it.

I just walked away, and didn't bother about what some people do: make a big fuss and bother about retiring and that sort of thing. That's it. Had a wonderful time. Cricket had been great for me. Seen the world, very lucky to do so. Happy as Larry. Just left it there.

I was coming back from injury when I debuted. I had a chance to get a hundred in the first Test, against a good South African attack. I had a collision with Peter Pollock and ran myself out. At least I got two fifties in the game. I didn't realise it was a bit of a milestone in a way.

As a wee fellow I used to go down to Lancaster Park to watch Canterbury play. I admired a number of Canterbury provincial players. I remember going down as a youngster when Frank Tyson was bowling against Canterbury and New Zealand. Seeing some of these Canterbury batsmen trying to face up to typhoon Tyson…

I played Australia only in unofficial Tests. That was all that was available. The Aussies wouldn't recognise us. It took until 1973 [for them to]. It took our winning Test matches against West Indies, and in India and Pakistan. Those three Test wins was a huge advance. That's when Australia began to sit up and think that these guys across the Tasman were not too bad. Those tough old Aussie administrators, they pretty much looked down their noses at New Zealand cricket, which was pretty sad. New Zealand rugby helped them when Australian rugby was struggling. That's way back in history.

I married an Australian.

I think Shivnarine Chanderpaul was only the second player to score a double-century in his first Test as captain, but my 239 is still the highest. Like all records, it will be broken before long. That's the way the game is, isn't it?

The game was much slower then.

I matured during that South African tour, without a doubt. I became a bit more fluent. When we got back to New Zealand after that tour - we had been to Australia, Southern Rhodesia, South Africa, back to Australia for a couple of state games, and then back home - we played against a Commonwealth XI. We were up against Neil Adcock, Benaud, Sonny Ramadhin, Bobby Simpson, Roy McLaren, and I got 50 or 60 two or three times against that side. I surprised myself and the crowd by hitting over the top, which I had never done before. So I must have matured a little bit.

I learnt a huge lot from other people, meeting people all around the world.

I broke my back in the West Indies in 1972. I was no good, and I couldn't even run. At that stage I was 35 years old. I had had a pretty good innings. I had to start working for my living and look after my family.

I didn't place the ball well. Sachin Tendulkar - I saw him play - his placement is wonderful. I wished I could get back and learn to do it how he does it. I developed a habit of moving across the line and hitting a few around the corner. Seemed to work for me.

The night before I made my captaincy debut, the chairman of the board rang me to say Barry Sinclair was not too well, and if he wasn't well in the morning, then I was the captain. I thought, "Whoops!"

"The night before I made my captaincy debut, the chairman of board rang me to say Barry Sinclair was not well, and if he wasn't well in the morning, then I was the captain. I thought, 'Whoops!'"

We were playing a warm-up match once, against Australian Universities in northern Victoria. We got to the last session of the last day, and the game was petering out. I said to Ken Wadsworth - he was the only wicketkeeper in the squad - "Do you want a bit of a rest and run around?" He said, "Yeah, I'd love to." I said to Richard Collinge, "Look, I'll give you a couple of overs, have a real go, see if you can blast out a couple of batsmen, and we might be able to force a win." And he bowled an absolute snorter, clean through the right-hand batsman, and it came, boom, and smashed the joint completely. I lost my finger. It was probably foolish. It was a risk I guess. I was doing it for the right reasons. I didn't for the life of me think anything like that could happen.

It was nice to be able to go down and talk cricket with Dick Motz. We talked cricket. He had a much better memory than I had. Very good cricket brain. A wonderful gutsy bowler. He could hit the ball. He missed it a lot of times too. Good, down-to-earth team-mate.

I continued in administration. I got involved pretty soon after I stopped playing. I enjoyed the administrative part of it. Travelling to Lord's as an administrator, meeting up with wonderful people from India, Pakistan, South Africa, West Indies.

Cricket can teach you all about life, really. Never get too confident. It will always bring you down to your own level.

India were 76 for 7 in Hyderabad, chasing 268 [in 1969], but we couldn't force the result because of a storm and rain that lasted half an hour. I think it was fair to say that the efforts to mop up and get the covers off the pitch… everything was just left. Even Pat [MAK Pataudi, India's captain] admitted that not enough was done. Rajan Bala wrote a book about the series, and he said we were robbed. We had lost a day earlier for rain anyway. India didn't get a hundred in either innings. Our bowlers bowled superbly under the conditions. There might not have been enough time anyway, but it would have been nice to have a chance to get back out there. I got a bit grumpy, it is fair to say. A captain wandering out barefoot, trying to dig holes, trying to get the water away. That was a bit over the top. I would have been banned today probably.

I was the match referee when Murali was called. I knew it was going to happen. It's all a bit sad really. I respected him and enjoyed watching him bowl. He had to do this to get it down the other end. There are other bowlers around who do it anyway. They have legitimised it, which is nice because Murali has been a wonderful bowler.

I had so much fun around the world and met so many lovely people. Wonderful memories. Had good team-mates in the days of the big long tours of five months. Wonderful experience when you are amateurs. Thoroughly enjoyed all that. 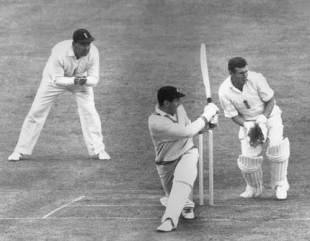 "I didn't place the ball well. Sachin Tendulkar's placement is wonderful. I wished I could get back and learn to do it how he does it" © Getty Images

Dick [Motz] was pretty unwell for quite a while, and living on the other side of Christchurch, in pretty poor conditions, in a council flat. I used to go and visit him. Walked in one Sunday afternoon and knocked on the door. No response at all. Knocked again. I thought I'd go inside. The heat hit me. The heater had been on all night. He had obviously died the previous evening. Had had a heart attack. The television was blaring away, the heater was on. Dick was in bad shape. He was huge. Wasn't looking after himself. Probably a blessing in disguise. Sad for a great cricketer, wonderful bowler, team-mate to go that way. We gave him a good send-off at Lancaster Park.

The amputated finger probably made me more bottom-handed than ever. I was missing the big finger of the top hand. But I was determined to come back. I had a season off, and at least got back to the West Indies, and led our tour for a couple of Test matches till other health problems set in. I was obviously getting too old and frail to carry on.

I enjoyed watching Garry Sobers, but he didn't score that many runs against New Zealand. A poor record for some amazing reason. One of the Australians I enjoyed watching was Norman O'Neill, a compact right-hand batsman. I loved watching him play. Our own Bert Sutcliffe, with whom I batted in my first unofficial Test innings, was a wonderful player. Beautiful, smooth, just charmed the ball along. Bert was a lovely man. Very helpful.

I don't miss anything about the game. I had my time. I loved it. It was magnificent. I enjoy watching it from time to time on television. I have learned a lot watching, but I am too old to make a comeback.