'A good bowler is someone who keeps evolving'

The former legspinner talks about Zimbabwe's current prospects, the highlights of his career, coaching in New Zealand, the importance of a work ethic, and more

Paul Strang, who bowled legspin with a hop and a generous tweak, and was part of the competitive Zimbabwe side of the late 1990s, had his playing career cut short by a chronic injury to his bowling arm. He left Zimbabwe, first for England and then New Zealand, where he now coaches. He spoke to ESPNcricinfo while in Hyderabad with the Auckland Aces for the Champions League Twenty20 qualifiers. 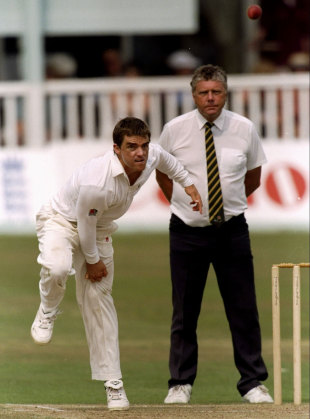 David Boon was my first ODI wicket. We were preparing in Brisbane recently for the Champions League, and there was a rain break in the Sri Lanka-Australia Test when this game was shown. I had never seen it before, and it was amazing to see Shane Warne turn the ball square. I was barely able to get it off the straight. It was a pretty bouncy pitch. It was one of those games where we fought hard and lost.

I think if you have got the natural ability to spin the ball then coaching will help you maximise it. I am still a bit old-fashioned and believe it is about work ethic.

The end of my career was frustrating. The [hand] injury was the main reason. I try to be philosophical about it and say that I got more out of sport than people usually do. I had a good eight or nine years playing at the top level and many fond memories, which is better than having nothing.

Zimbabwe have a dearth of fast bowlers. There haven't been many since Heath Streak, Henry Olonga and Eddo Brandes. Kyle Jarvis and Brian Vitori look good, but the thing with young bowlers is that they have got to bowl for a year or two.

The only way you will work hard at something is if you love doing it. A spinner has got to love bowling. You have to bowl a lot when you are growing up.

I don't know why Zimbabwe has produced more spinners than we probably should, on a per-capita basis. We have got talent and a good work ethic. I think it has got more to do with the work ethic.

I coached Graeme Cremer for a session or two when he was 16. He was very talented, probably a bit of a wayward young fellow. As most 16- or 17-year olds are, he wasn't quite sure what to do with his life. I rate him. I saw a bit of him in the World Cup and was very impressed.

Zimbabwe seem to be heading along the right track. There are no easy solutions.

I've been in New Zealand five years now, and have been coaching for three. I played club cricket here, liked it and decided to stay on.

You need a generation of players to come through again. The most frustrating thing back then was that all the hard work was undone - 10-12 years of it - in a matter of months as soon as you lost that core bunch of experienced players. But there are enough good players now to occasionally give someone a fright.

You instinctively start to do the right things if you practise a lot and think about your game.

"John Buchanan's ideas are drastic because [they are] different. He thinks through what he is doing. I am the sort of person who will give people a chance. Who knows, it might be what we need"

Coaching is a tough job for the family. It is all contract-driven, so if you don't get one you have to move. It's not easy, but many do it successfully, and I am enjoying it at the moment.

It can be frustrating at times when you have really bowled well [and hit the pads] but the ball pitched just outside leg stump. If I would want to change one rule in cricket, it would be that. Not for the negative line, but from over the wicket. Left-arm seamers would probably want the same thing. I can't quite understand how that rule got in there, but that's the way we have played the game and you live with it.

Duncan Fletcher was my coach at the University of Cape Town. He was a legend to me, as he had been captain of Zimbabwe before, and I have fond memories of him.

My parents and my brother [Bryan Strang] are still in Zimbabwe. I'd like to go back, but if I do it would have to be for work. I have got a young family and an English wife. Taking them from New Zealand to Zimbabwe will be quite a culture shock. Bryan loves Zimbabwe. I can't see him leaving.

A good bowler, for me, is someone who stays consistent, keeps evolving and stays ahead of the batters.

Coming back from injury and taking 8 for 109 against New Zealand was a huge game for me. You are not sure where your future lies and you have lots of self-doubts. I was obviously pleased with that day, but you just go out there and bowl.

Making the transition from player to coach wasn't easy. When you are a player you are reliant on yourself. Your success is dictated by how much time you put into your game. In coaching you rely on 15-16 others, who affect your success. A big part of it is managing and understanding people. I make mistakes all the time and I am still learning. You have got to be down to earth and you cannot be too emotional.

Zimbabwe developed as a side. We had some poor times earlier, but we stuck together and learnt from our mistakes. Murray Goodwin and Neil Johnson certainly added to our game. That team became a banana skin for others. It was nice to play with such a lovely bunch of people and represent your country.

I was coming to the end anyway around that time, with injuries. And then there were all sorts of political shenanigans going on, which didn't help. They were a real distraction.

I enjoy the set-up in New Zealand. The whole way of doing things is different to Africa. There is a lot more investment in sport. There is a lot more money available when you want to do things - not too much, but definitely more than in Africa. They are serious about their cricket and have invested a lot in terms of time and people.

The Red Lions [the team formed by Zimbabwe's sacked cricketers in 2004] tour of England was a great concept. I was in England playing club cricket, and my involvement with the Red Lions was pretty much playing against them. It was a time when there were lots of feelings going on, and it embodied some good vibes.

That's what you play sport for - the highs and the lows. It set me up for becoming a coach. We saw the worst of cricket and also the best of it. 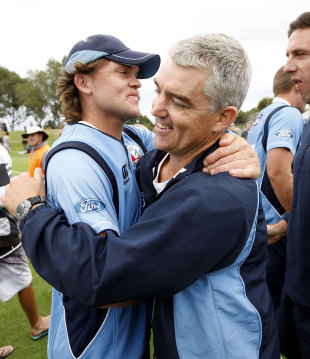 "In coaching you rely on 15-16 others who affect your success. A big part of it is managing and understanding people" © Getty Images

If you play professional cricket, certain jobs you take on have a coaching element, either for your team-mates or the juniors at the club. I found that I quite liked doing that. I am still very young as a coach. I am looking to just keep growing and developing.

John Buchanan's ideas are drastic because [they are] different. He thinks through what he is doing. I am the sort of person who will give people a chance. Given [New Zealand's] talent, I think we should do better. Maybe his fresh look on things is the way. It probably cannot be worse than what we have done in the past, which hasn't achieved success.

I am very pleased with Andy's [Flower] success with England. He has always set high standards. He is uncompromising. He works hard and puts in a lot of time and effort into the detail. He's also done very well to get good people around him. When I have a look at all the England support staff, and Graham Gooch combined with Andy's tenacious character, I am not surprised at all by their success.

Board under fire for not living up to apolitical claims