'I tell people my career was pretty similar to Warne's'

Lindsay Kline took the third, and to date last, hat-trick to be bowled in South Africa. He looks back at those three eventful balls As the Australians made their way to Cape Town for this week's first Test, Lindsay Kline was at home in Melbourne, reflecting on his own achievements in the city 54 years ago.

Remarkably, nobody has taken a Test hat-trick in South Africa since Kline achieved the feat in 1957-58, while the remaining nine Test nations have all hosted a hat-trick this century.

Kline's effort at Newlands was all the more special as it came in his second Test match and it won Australia the game, the last three South African batsmen failing to handle his left-arm wrist-spin. That gave Ian Craig's Australians a 1-0 lead, and they went on to take the series 3-0, a fine result for a group labelled by the press as the weakest Australian side ever to embark on a tour.

In the first Test, in Johannesburg, Australia fielded four debutants, one of whom was Kline. He didn't take a wicket at the Wanderers, but he certainly made his mark in the second Test.

After the Australians scored 449 in the first innings (Jim Burke's 189 the highlight), South Africa struggled against the legbreaks of Richie Benaud and Kline, who took four and three wickets. These days it's almost unheard of for a side to play two spinners in South Africa. Back then it was the norm.

"South Africa in those days didn't play the spinners particularly well," Craig told ESPNcricinfo. "If you go back to Clarrie Grimmett and Bill O'Reilly, they [South Africans] always had trouble with legspinners. Obviously Lindsay caused problems for them too."

South Africa made 209 and followed on, and by the time Benaud demolished the middle order and took his ninth wicket of the match, the result was certain. At 99 for 7 in South Africa's second innings, Kline began his magic.

"Not quite like it was yesterday, but I'd say I remember it like it was a week ago," Kline said last week. "I bowled to Eddie Fuller. It was just my ordinary legbreak to a right-hander, coming in from the off. He pushed forward and Richie took a catch close in.

"Then Hughie Tayfield came in. He wasn't a bad player; he made a few runs in his time. I bowled it a bit quicker. It was my legbreak - I told people it was a flipper, but it wasn't. It skidded a little bit and he was plumb in front. It must have been close, because they were South African umpires!"

Then No. 11 Neil Adcock walked to the crease. In 99 first-class matches, Adcock didn't score a single half-century. He was the kind of man any bowler would want facing a hat-trick ball. Craig set the field in close and Kline walked back to his mark and considered his options.

"Then Hughie Tayfield came in. I bowled it a bit quicker. It was my legbreak - I told people it was a flipper, but it wasn't. It skidded a little bit and he was plumb in front. It must have been close, because they were South African umpires!"

"I thought to myself, I'll bowl my legbreak," Kline said. "I thought he could play back and be lbw or bowled or caught in close. But on my approach I changed my mind and bowled my wrong'un, and it pitched off stump. He played forward and got the edge."

At first slip, Bob Simpson, also in his second Test, moved low and to his left to take a blinder.

"I didn't realise until about a week later, when I saw it on Movietone News, how good a catch it was," Kline said. "It was low and he had to move a couple of feet. It went between him and the keeper. It was a very, very good catch. He's definitely the best catcher I've ever seen.

"That finished the Test. We won the Test on those three. It was a great celebration. I was thrilled to bits." All the same the celebrations were, as was typical in those days, understated.

"We were very excited for him because he was a hell of a nice fellow," Craig said. "We were just so pleased for him. I don't think there was quite the amount of enthusiasm or high-fiving that happens now. It was a little bit more subdued than that. I'm sure we patted him on the back, though."

It was to be the last hat-trick taken by an Australian for 30 years, until Merv Hughes achieved the feat across two innings of a Test against West Indies at the WACA. And then of course, another Victorian wrist-spinner followed Kline into history, with a hat-trick in a Boxing Day Ashes Test.

"The three dismissals of Warnie's and mine, we dismissed the three batsmen for 0," Kline said. "He [too] had one caught and one lbw and the next one caught. It was the only hat-trick I ever got at any level. Shane Warne told me he'd only got one as well. I tell people my career was pretty similar to his. The only difference is, he got 700-odd wickets and I got 34."

Kline only played 13 Tests but he squeezed plenty of action into them. He went on to face the last ball of the 1960-61 tied Test, when his partner, Ian Meckiff, was run out, and he batted for an hour and 50 minutes to secure a draw in the same series against West Indies in Adelaide.

And to this day, he took the last Test hat-trick in South Africa. 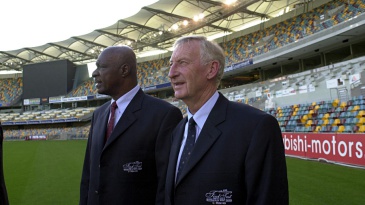 Lindsay Kline, the left-arm wrist-spinner who faced the final ball of the famous tied Test between Australia and West Indies in 1960, has died at the age of 81