The former Pakistan batsman who was chief selector of the 1992 World-Cup winning squad, recalls his brief cricketing career, his favourite players, and more Javed Burki: a batsman and a civil servant © The Cricketer International

Sport was an essential part of my family. Apart from cricket, we also excelled in hockey and athletics. Two of my mother's cousins captained the Pakistan hockey team. I played all three sports.

My greatest regret is that I was not a full-time cricketer. My career figures don't reflect my actual talent. I had a foot in both civil services and cricket. After 1962, my civil services career weighed on my mind and cricket was not my main priority. I never came close to the Test performances of my early years.

My father was an army officer. When I was nine, we moved to Rawalpindi cantonment from India. At St Mary's School, my math teacher, AA Qureshi, a cricket fanatic, organised a team that included President Ayub Khan's son, Akhtar; the former army chief Asif Nawaz Janjua; and future Test cricketer Ijaz Butt. We dominated the school championships. Then it was the Pindi club, the best side in local cricket, captained by Salahuddin Khan, a relative who had played for Northern India in the Ranji Trophy. So Mr Qureshi and Salahuddin Khan were the early influences.

My best attribute is being rational. I'm able to make decisions based on my own convictions, without being influenced by anyone.

My cricket career really took off at the famous Government College, Lahore - the best college side in Pakistan. There was a great sports environment. The college team included many established and future Pakistan Test cricketers. I had the honour of captaining not just the college team but also the Punjab University side.

Twenty20 is an interesting new format. All sports need to evolve. You have somewhat different audiences for each format. It is the beauty and strength of the game of cricket to have so many formats. Not many sports offer that.

Pakistan's team of the '50s was the product of the well-organised Ranji Trophy, and gave very good results. The '60s side came through our own poor first-class structure. There were financial constraints as well. A team from the north, like Rawalpindi, could hardly manage a single match in Karachi. There was a renaissance in the '70s, when players polished in county cricket strengthened the national side. The country's cricket board got richer and more money was injected into the domestic game. Departmental teams offering permanent jobs to players came to the fore.

I made my first-class debut at the age of 18, against a visiting MCC side.

My three years at Oxford really honed my skills. I played in three Varsity matches (1958-60). Two famous Indian cricketers, MAK Pataudi and Abbas Ali Baig, were my team-mates at Oxford. In those days Oxford and Cambridge used to play around 15 first-class matches against county sides early every season.

I had a wonderful start in Test cricket: scored over 650 runs at an average of more than 50 in my first two Test series. But the thought of cricket as a profession never entered my mind. It wasn't a career in those days.

The cut was my favourite stroke. I was a strong cutter of the ball, not only behind point but even through the covers.

I was burning the midnight oil preparing for the civil services exam in Pakistan when I got called up for the 1960-61 tour of India. The selectors were considerate enough to allow me join the team just before the first Test, in Bombay, after my exam. When I arrived in Bombay, I found I couldn't stand the sun, having studied indoors for a long time. But I played the Test on the insistence of the tour management.

Lord's is my favourite ground - small, so gives spectators a close view of the action. I scored centuries there for Pakistan and Oxford University.

During my tenure as the chief selector, 1989-93, players like Inzamam-ul-Haq, Waqar Younis, Mushtaq Ahmed, Saeed Anwar, Moin Khan and Zahid Fazal made their first representative appearances for Pakistan Under-19 and Pakistan B. Imran Khan, the Pakistan captain, used to ring me every second week from England to ask if I had found any outstanding talent. When he came to Pakistan in 1990, he was amazed at the new crop.

In 1958, in the Oxford v MCC match, I had a terrible injury when the ball hit my eye. Our captain, Jack Bailey, was adamant that I play in the prestigious Varsity match, right after the MCC one. Before I went out to bat against Cambridge, Bailey placed a bit of steak on my eye to keep it open, but my eye swelled shut after a couple of overs. Ted Dexter, the Cambridge captain, knew it and had his bowlers bowl at my body. In frustration, I tried to hit out and lost my wicket. My poor batting in both innings contributed to our defeat.

Though Pakistan lost the 1961-62 series against England, Imtiaz Ahmed had captained the team well. During the camp for the 1962 England tour, Imtiaz, Hanif [Mohammad] and I were asked by the cricket board to come for a meeting. I was astonished when the selectors informed me that I was captain for the series. I was reluctant to accept the role, but eventually I had to obey - almost all the selection committee members were senior civil servants and I was a junior civil servant.

"Imtiaz Ahmed is my favourite cricketer. Like me, a man who followed his own heart. I have never seen a better batsman against short-pitched bowling"

My maiden Test hundred was my most memorable cricketing moment. It was in Lahore, where I had played most of my cricket, and many of college and club mates were in the crowd.

I hardly had a role in the grooming of my cousins, Majid Khan and Imran Khan.

Nothing went right on the 1962 tour of England. Most of the Pakistan stars of the '50s had either faded out or were at the end of their careers. The new boys weren't real replacements. It was Hanif's leanest series. His confidence was shattered and he refused to open, and afterwards he almost always batted in the middle order. The other star batsman, Saeed Ahmed, was suspect against the moving ball and never succeeded in England. The bowling was no different. Mahmood Hussain, the most experienced among the fast men, and young Mohammad Farooq, the fastest of the lot, both had fitness problems and broke down midway during the series and returned to Pakistan. The tour selection committee asked for Bashir Hyder, who was the best seam bowler in Pakistan at that time, but Fazal Mahmood was sent instead. It was unfair to him because by then he was a slow-medium legspinner, and he was thrashed.

Imran played under me for Lahore during the early part of his first-class career. He was a bit of a slinger. Almost every ball came in to the batsman. He once asked me to teach him the away-going delivery. I said, "I don't know a thing about fast bowling. If I try to teach you, you would end up worse."

General Zia-ul-Haq was Pakistan's president when the issue of the Packer series surfaced. He convened a meeting in Lahore to decide if Pakistani players who played for Packer should be selected for the 1978 tour of England. My view was that it was a professional's right to play for any team. Even during Pakistan's first tour of England, in 1954, ace fast bowler Khan Mohammad missed a couple of Tests due to his commitments in the Lancashire league. Packer was ready to release the Pakistani players for the England tour. Chaudhry M Hussain, the president of the cricket board, and AH Kardar opposed me. They called the Packer boys mercenaries. President Zia gave his verdict: "We don't want circus players." The team was thrashed during the England tour of 1978. General Zia was furious and wanted to change the team in the middle of the tour. He was told he couldn't do that, so he decided to dissolve the cricket board. For that he needed to set up an ad hoc committee to make a new constitution, and I was a member of the committee. We immediately recalled the Packer boys and Pakistan notched up memorable victories against India in the 1978-79 series.

I was asked to manage the Pakistan team for the 1979 World Cup, and as a member of the ad hoc committee, I couldn't refuse. Pakistan were among the favourites for the tournament but we lost to the hot favourites West Indies after a good fight in the semi-final.

I think Kardar, Pakistan's first Test captain, was behind me being appointed captain for the 1962 tour of England. He had hinted at it before. The captains who succeeded him had not been very successful. He was an Oxonian himself and he probably thought my Oxford background was a good qualification.

Hanif was Pakistan batting's mainstay through the '50s and '60s. It was often said that after he was out, you only had to add 100 runs to the total to get Pakistan's final score.

Fred Trueman is the best bowler I have faced. He had a lovely outswinger and a very good bouncer.

It was on the insistence of my cousin, General Zahid Ali Akbar, the president of the PCB, that I reluctantly became the chairman of the national selection committee in 1989. I have the honour of being the chief selector of the Pakistan team that provided the nation with its greatest cricketing moment - winning the World Cup in 1992.

Imran always wanted to have his own team but at times I overruled him. For instance, he was not in favour of Aamer Sohail, who was yet to make his Test debut, for the '92 World Cup, but Sohail went on to be a great success in the tournament.

In late 1994, I got to know through TV news that the PCB had been dissolved and the president had appointed me chairman of the ad hoc body. 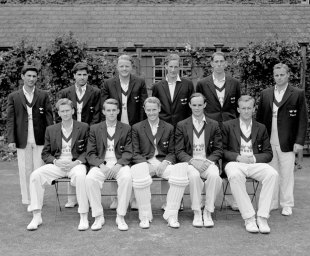 Abbas Ali Baig (standing, first from left): the finest batsman Burki (next to him) saw during his university days © PA Photos

Imtiaz Ahmed is my favourite cricketer. Like me, a man who followed his own heart. I have never seen a better batsman against short-pitched bowling.

The 1962 tour disaster was not an isolated incident. The '60s were easily the worst decade in the history of Pakistan cricket. Apart from two victories against lowly New Zealand, Pakistan failed to win a single Test.

My best batting performance was the century in the Lord's Test of 1962. I also enjoyed scoring a double-century against Sri Lanka in 1966 in Karachi; I was on top of the bowling throughout.

My principles often landed me in trouble in Pakistan.

The finest batsman I saw during my Oxford days was Abbas Ali Baig. He was outstanding in 1959. In the Oxford match against Yorkshire, he joined me with our team at 17 for 2. Trueman greeted him with two successive bouncers, which he dispatched to the boundary. The third delivery, an inswinging yorker, received the same treatment. Baig went on to score 130. That season he also scored lovely half-centuries against two other great fast bowlers of the time, Brian Statham and Keith Miller. Miller used to write a column in a newspaper, and he wrote about Baig that he hadn't seen such batting in a long time. Later that season, Baig was a member of the touring Indian squad. *He made his debut with a bang - a magnificent century in the fourth Test.

My three-year tenure as Pakistan's chief selector provided me with one of my greatest satisfactions.

My kids are in Pakistan and the US, and I spend around three months every year in the USA. Playing golf in both countries is my favourite hobby.