When the gods smiled on Mike Veletta 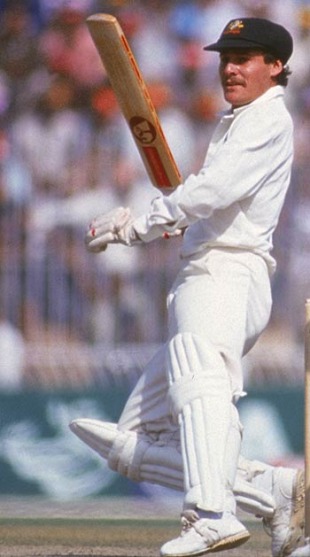 "My simple thought was, 'If I am ever going to get a good innings, I'd better make it today'" © Getty Images

Mike Veletta played arguably the most forgotten cameo in a World Cup final. There are many other lasting memories of that 1987 game, which Australia won. David Boon's 75 at the top, Mike Gatting's reverse sweep, and Steve Waugh completing his "iceman" tour with the wicket of the marauding Phil DeFreitas at the close, in an over that went for just two runs.

Veletta remembers that day clearly. He also remembers that on that November Sunday in Calcutta, he was involved in the run-out of Allan Border, and that he dropped John Emburey on the cover-point boundary. Between those two events he scored 45 not out off 31 balls, taking a faltering Australia to a defendable total for their first World Cup win.

For Veletta, apart from the cricket, the World Cup was one of life's great experiences. He was in a new country, with new experiences on and off the field. He remembers going to Fisherman's Cove in Chennai. He remembers the tight win against India in Madras, the venue of the monumental tied Test between the two teams, barely a year before.

He remembers when their luggage was stuck at the airport, with all the workers on strike. "We decided to do it," Veletta says. "The strong guys would get on the bus, the others on the bottom. As a team, we loaded all the luggage - everyone chipping in. I remember Craig McDermott, who had a great series - he was the guy lifting the bags. Monumental effort."

Veletta says they believed it would be a memorable tournament for them from the time they won their first match, the one against India. During that game, batting first, Geoff Marsh hit one in the air, which went through Ravi Shastri's hands at the boundary and was signalled four. During the lunch break the replays were checked, and Australia were awarded a six. They won by one run.

Veletta only became part of the XI in the latter half of the tournament. His first three innings were 0, 43 and 48. The side had enough bowlers and they persisted with Veletta ahead of Tom Moody. "Bloody Geoff Marsh ran me out for nought," he remembers of his first game of the tournament.

On the morning of the final, he says, things that usually faze people on the big stage inspired Australia. "My simple thought was, 'If I am ever going to get a good innings, I'd better make it today.' All our players felt that way. It's a great day, the venue is fantastic, the whole experience is great.

"Calcutta was just outstanding. Going from the hotel to the ground - about a kilometre - as we went past the big sort of savannah, there were masses of people, so the bus had to go real slow. I think as players we just looked at it as one of the great life experiences. We were just fortunate to be there."

It began slowly, and then three wickets fell for 17 runs, leaving them at 168 for 4 in the 39th over. Teams today happily take 253 from that stage, but this was 1987. And in the middle were two batsmen known for their stodginess: Border and Veletta, the hard-nosed captain and the typical Western Australia opener.

Soon the run-out came about. The thought of sacrificing his wicket never occurred to Veletta. There was no single available, and he sent Border back. Tell him that that is the reason he doesn't find a mention in Border's book and Veletta laughs.

"I was no chance of getting there," he says. "I had to send AB back. I didn't think I was going to get halfway. We probably wouldn't have crossed."

Before the misunderstanding, though, there had been an understanding, and a crucial partnership of 73 in 10 overs. England's offspinners, Emburey and Eddie Hemmings, had been bowling a suffocating straight line with a leg-side field for Veletta. He tried going against the turn and narrowly cleared the cover fielder. Border asked him not to do it again.

It was a challenging situation to bat in, but one Veletta expected to be in. "The way the game went then, [the No. 6] was always coming in between 35 and 40 overs," he says. "You knew what your role was going to be. It didn't surprise me. The fact that we were a little bit slow early on was probably a cautionary thing. We didn't want to lose wickets."

In Waugh's company, Veletta took 11 off the last over. Waugh observed how Veletta used the depth and width of the crease, almost like Saleem Malik - to the extent that it distracted the bowlers.

Veletta had to play that way to survive in his new role. He was a Western Australian opener, schooled on leaving well and grinding for runs; a breed that gets a drive ball about once a month. Here he was in the subcontinent, in a situation where he needed to go fast.

The thought of sacrificing his wicket never occurred to Veletta. There was no single available, and he sent Border back. Tell him that that is the reason he doesn't find a mention in Border's book, and Veletta laughs

"I remember reading in Steve Waugh's book, actually, that I was a great improviser in one-day cricket," Veletta says. "Because I was otherwise known in first-class cricket as an accumulator, I had to change my game to suit one-day cricket. Particularly in India. If you came in in the 35-40 overs range - the ball is old, and I was not a power hitter, so I had to do something. I was not a Moody or an [Simon] O'Donnell, who were the power hitters.

"So I had to use the crease. There was a slower ball from Neil Foster that I hooked. Then I got inside the line of one and deflected. Yeah, it was effective. I kept moving inside the line. I had to adjust to suit my game."

Gatting and Allan Lamb chased with gusto, but they fell to Australia's captain, Border, and their future captain, Waugh, respectively. Gatting's reverse sweep still gives English fans nightmares. Australia didn't win that easily, though. DeFreitas and Emburey turned it on at the end. Then there was the drop by Veletta.

"I remember Geoff Marsh saying to Craig McDermott, 'Just don't bowl a no-ball.' That was Geoff's advice. See, now we know why he is Sri Lanka coach. Offering advice like that - very clever."

Veletta himself wasn't particularly sharp in those closing overs. The last ball was hit towards him, and even though Australia were seven runs to the good, he threw it back to the keeper. "It was stupid," he says. "Should have just held on to it. Or let it go through for four and then picked it up. Should have kept the ball. In the end, as you know, people were grabbing stumps and bails. Steve Waugh actually grabbed me a bail."

Veletta was considered the find of the tournament, but he only played international cricket for about another two years. He got to open in only one Test, which also turned out to be his last, but he doesn't make excuses. He says his performances probably didn't warrant more persistence. Does he think that final was the best cricket he played, then? Turns out it isn't.

"For Western Australia over the years, it has been better," he says. "The occasion was far greater than any other occasion, so that way it was pretty special. Every cricketer has a number of special days. I knew it was a special day. Winning three Shield finals in a row was special." One of those, in 1992, was extra special because Veletta would keep wicket once the new ball became soft, allowing Tim Zoehrer to bowl legbreaks and take the big wicket of Mark Waugh.

There also was the Ashes win in 1989, Australia's first in England in 14 years. There was an open-top car ride through Sydney. Veletta was seated with Mark Taylor, and Zoehrer with Steve Waugh, two Western Austraians with two New South Welshmen. "We kept joking that the crowd were asking, 'Who is that fellow with Tim Zoeherer?' 'Who is that fellow with Mike Veletta?'"

Those are the days when, he says, you think the gods are smiling. As they were on November 8, 1987.