'I enjoyed playing but should have studied it a bit more'

Cricketer, rugby player, lawyer and politician, Clive van Ryneveld featured in South Africa's famous Test win in England in 1951. He looks back at his sporting and working life Jack Cheetham took a side to Australia and I was invited to go with him as vice-captain, but I had just started practising at the bar so I didn't go. Bad mistake. I wish I had.

I had seen Bert Sutcliffe felled by [Neil] Adcock in the New Zealand series. He went to hospital. I put a limit on our fast bowlers, Adcock and [Peter] Heine. I said, you can average one short-pitched ball an over - no more. In retrospect, I think we could legitimately have used a few more. We didn't use many against the Aussies. I just thought it wasn't in the spirit of cricket to go on bowling too many short-pitched balls.

Today they don't carry any poor fielders, whereas in our day we used to stick the poor fielders at point and mid-on. They set much store by fielding now and it's partly a development of the 50-over game. The fielding is better now but we had some fine fielders too: Colin Bland was the famous one for South Africa. Jackie McGlew was good, and Roy McLean. We had some fine fielders.

I wouldn't choose cricket or rugby above the other. I enjoyed my rugby tremendously during those three years at Oxford. I didn't go on playing rugby because when I got back to South Africa I dislocated a hip playing rugby at Stellenbosch and the doctor said give it up. I was quite happy to because I was playing quite a lot of cricket in the summer.

I played cricket for Western Province a couple of games one season before I went to Oxford. I played at Oxford all three years I was there and captained Oxford in my second year there. Then coming back from Oxford I went with Dudley Nourse's side to England in 1951.

Alec Bedser was outstanding. But the wickets were a bit wet. That fast legcutter - I thought he was often unplayable.

I watch cricket a lot on TV, and when there are games at Newlands I always come and watch. I don't much enjoy the Twenty20. I quite enjoy the 50-over games, but really I prefer the old style of Test matches.

A friend of mine, Zach de Beer, had got into parliament five years before me. He persuaded me to come into politics. I wasn't a natural - I was a very amateur politician - but it was a very interesting time.

I normally fielded at mid-off, to be in touch with the bowler when I was captain, but also in the close positions. I started off as a cover-point fielder.

When we won that first Test against Freddie Brown's side against England in 1951, against the odds, I think that was a great day for us. We were a young and inexperienced side. We did very poorly in the matches before the first Test, and Nourse broke his thumb. We really didn't have a snowball's hope in the match. When the final wicket fell, [Johnny] Wardle took a swing at it and he hit the ball as high as I've ever seen a ball hit. Roy McLean, who was fielding on the boundary as a substitute for Dudley, just nonchalantly took it as it came down.

I used to bowl a few legbreaks but they were a bit erratic.

Trevor Goddard was the best allrounder I played with. He opened for us and was a very good left-arm medium-pace bowler, moving it a bit both ways. He was very difficult to get away. Adcock and Heine were an outstanding fast-bowling pair. We had Adcock and Heine to start, then Goddard and [Hugh] Tayfield. That's a great foursome. It was just a pity that our batting didn't really back them up sufficiently.

"I had seen Bert Sutcliffe felled by Adcock in the New Zealand series. He went to hospital. I put a limit on our fast bowlers. I said you can average one short-pitched ball an over - no more. In retrospect, I think we could legitimately have used a few more"

I didn't go on overseas tours. When Peter May's side came out [in 1956-57] I wasn't captain. I was the only Western Province player in the side. The others were from Transvaal, Natal, etc. On the morning of the game Jackie McGlew withdrew and they said would I captain the side? I went into that Test match never having played with Goddard, Heine, not knowing what they were like. I picked it up along the way, but compared with people like Cheetham, who knew they were going to captain the side in Australia and made a study of the side with plans, I never really got down to that. I was trying to keep a law practice going during the Test matches.

People who had been in politics were regarded as not serious lawyers. It was quite tough having been in parliament to go back and try to work the practice up again. I was very sorry to leave the bar. I went into Hill Samuel Merchant Bank. I was there for 20 years.

We would have a net the day before a Test match but that was the sum total of it. One didn't really have an opportunity to be at peak form for the Test matches of that era.

I played rugby for England. It was soon after the war and they didn't worry too much about qualifications. If one was an ordinary resident in England, as I was, for three years, they didn't really question whether one had special qualifications. When I was asked, I was happy to take part. I played in the centre.

England had a very strong bowling attack. If you take the fast bowlers, they had Frank Tyson, Brian Statham, Trevor Bailey and Peter Loader to choose from, and for spinners, they had Tony Lock and Jim Laker and Wardle. That's a fantastic seven to be able to choose from. But their batting wasn't as strong.

I think they were a bit tired at the end of it, frankly. They had played against Australia the previous season and came out here, and I don't think they took it as seriously as we did. We were dead keen to try and equal the series. We managed to do it with a bit of luck, but I think they were the better side.

My wife and I were rather relieved when I lost my seat because we had two young children and another one on the way. It wasn't a life, having a constituency at East London and parliament in Cape Town for six months of the year.

I was more of a batting allrounder. In Dudley Nourse's side I batted at No. 3. But I didn't play in the next series and other players took those positions, so I came in a bit lower. I never really played sufficient cricket to be in the top flight.

I was particularly interested to read Arthur Mailey's book, in which he deals with the ballistics of a spinning ball. He must have been a very good legspinner. He says that you get flight by spinning it a lot. He sets it out very well. You have to be consistent to take advantage of it. It's one thing to be able to flight it but you've got to put it on the right spot as well. After I left university I never really bowled enough to keep a consistent length.

I wasn't a great studier of cricket. I enjoyed playing but I should have studied it a bit more.

I used to flight the ball. But I wasn't as sophisticated as Mailey.

Against the New Zealanders, one paper picked me out as the player of the series. Otherwise I wasn't contributing a hell of a lot. I was making a few runs down at 6 or 7 and occasionally taking a few wickets.

Richie Benaud and Alan Davidson were top-class allrounders. On South African wickets, [Ken] Slasher Mackay was extremely difficult to get out. He held us up a lot. They had Neil Harvey, Colin McDonald. They were regarded as weak because they hadn't done too well in England, but they weren't a weak side.

Often teams from the southern hemisphere struggled in England on those wickets. In my day they weren't covering the wickets, so very often one was playing on a wicket that was wet. You just weren't accustomed to it. It didn't have to be a sticky wicket but nevertheless the ball came to you quite differently off a damp wicket.

After the Aussie tour I decided to concentrate on the law, and I was in parliament. It was enough to be an MP and try to keep a practice going. I gave up cricket then. During that period, [Harold] Macmillan came out and made his Winds of Change speech, the ANC and the PNC were banned, we had the referendum and became a republic - all during the period I was in parliament.

I went to what's called a church school and I think it had a fairly generous outlook towards all other people. My three years in England probably also confirmed my liberal approach. 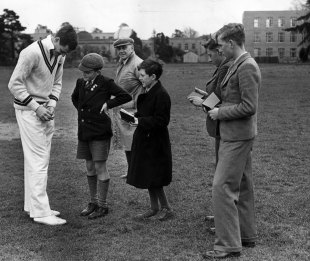 Graeme Smith has been a good captain. One could argue that he shouldn't hit across the ball so much to the leg, but he's actually made a hell of a lot of runs doing it, so one can't get too angry with him.

I think the technology and the review system is interesting. I think it's a good thing. It adds interest for the spectators and it makes it a bit fairer.

We, of course, had home umpires. Very often one had complaints against the umpires, probably quite rightly. But they didn't have anywhere near the practice that they have in umpiring these days. I think it's an excellent scheme to have the international panel. It's much better than in our day.

After I retired I went back to the law in a part-time capacity. In South Africa we don't have the jury any longer but in the more serious criminal cases, the judge has two assessors, who have had some legal experience. I did quite a lot of that work. I also took cases in the labour courts. I worked on the periphery of law for the next 10 or 15 years. Now I'm fully retired.