Graham McKenzie didn't sledge, though he bowled pretty fast. He talks of life on tour and as a county cricketer 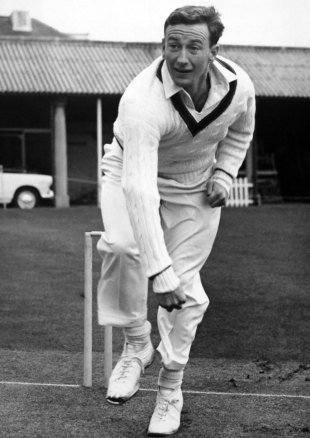 Graham McKenzie: generated plenty of pace with his body and shoulders © PA Photos

I wasn't specifically taught my bowling action. I saw Ray Lindwall a couple of times when I was a youngster. I couldn't watch him on TV but I saw him at the WACA a couple of times and always envisaged that I was probably a bit like him.

Playing for Australia wasn't something that a Western Australian achieved so often.

County cricket was a different world. You didn't earn any money in Australia. I liked it in England. It was a good lifestyle. I was single and had no ties, but it probably didn't help having to bowl all winter and then come back. It wasn't like now. There wasn't a lot of money if you played in Tests.

Three of the best batsmen I bowled to were Garry Sobers and Barry Richards and Graeme Pollock. They were the ones that could really take you on.

Some people said I was too nice to be a fast bowler. Nowadays they build them up to hate the batsman. That wasn't in my nature. Sledging wasn't part of it. There was just the odd player who used to annoy you.

I played against Frank Worrell for Western Australia against West Indies in Perth at the beginning of the 1960-61 tour. He must have been impressed by me because he kept mentioning me in newspaper articles throughout that tour. Then I was picked at the end of that season to go to England.

India was quite a difficult place. We were pretty jaded after three months in India in 1969-70. It was a pretty hard tour. It's much easier now.

It was quite hard when I finished. Your friends are in their mid-30s and they're pretty established in their jobs, and all of a sudden you don't have any job - you had to start afresh and you didn't have a lot behind you.

The West Indies was really interesting. I enjoyed playing there.

One of my regrets was that I didn't get picked in the 1972 team when I was playing really well. I was really looking forward to knowing that there was also Dennis Lillee and Bob Massie. I'd had a Shield season that was probably the easiest I'd ever had, because we were knocking over teams. And then I didn't get picked in the Australian team. I thought I could be the secondary bowler. That was a big disappointment, especially because they were going to England, where I felt I bowled better than anywhere else.

Being a pace bowler is not easy. It's great if you can get good support. You can be lucky and have a couple of other good bowlers with you. If you can't get them out, the others will. A couple of times in my career it was a bit hard. I didn't have a great deal of support.

Richie Benaud was an inspiring captain. He looked after you.

If you only ever did one tour, you'd want to go to England, for the traditions of cricket. I liked playing cricket in England.

About two or three years before I started, WA were brought into the Sheffield Shield full-time instead of having only been part-time. That gave us more exposure and someone was going to break through. Up until then there had only been two or three from WA who had played for Australia, and they had only played one or two Tests. By the time I finished we had half a dozen in the team.

We had a few days off one year when I was playing for Leicestershire and I got invited out to a nearby farm with one of the other players. I'd never ridden a horse, so I thought, "I've got to learn how to ride a horse." I was leading a horse through the gate and opened the gate and didn't realise he was going to go on ahead. He trod on the end of my toe. I had to play the next day but I couldn't put a boot on. I was out for a week.

"Being a pace bowler is not easy. It's great if you can get good support. You can be lucky and have a couple of other good bowlers with you. A couple of times in my career it was a bit hard. I didn't have a great deal of support"

I finished with something like 1200 first-class wickets. There were people like Clarrie Grimmett who had taken more, and a couple of the early Australian players. Shane Warne played quite a bit of county cricket. You had to play quite a bit to get that many wickets.

By normal standards I had a short run-up. It was about 16 metres and then went to about 20 metres at the end of my career. I used to think that I didn't want to run too far. But I could generate enough pace with my body, with my shoulders.

It was the last time [1961] we went the full way to England and back on a ship. These days people are here one week and the next they're in England. We left at the end of March and we only started to play cricket again at the end of April.

I played in one WACA Test. I just snuck it in. I played all my career until then without ever playing at home, so it was quite special and a big occasion for Perth in those days.

They changed the rules in 1968 so that you could go and play county cricket even though you didn't live in England. I was playing with the Australian team in 1969 and a couple of the counties didn't have overseas players, which they were eligible for.

It's hard to know how fast I bowled, because we never had it measured. I imagine I bowled mid-140s, maybe up to 150kph occasionally.

I lived in South Africa for a while. I played a couple of games for Transvaal in the one-day competition. My first wife was South African.

My dad and my uncle both played for Western Australia in cricket, not that WA played much cricket in those days. They were both quite involved in hockey as well. Dad played for Australia in hockey.

In those days you could order a car, buy it and use it in England for a couple of years and then bring it back tax-free. I had to go and collect the car in Germany and drive it to England. I caught the plane to Stuttgart and picked the car up. I tried to come back but I got to the ferry in the middle of the night and there wasn't one until the morning, so I had to stay the night. I missed a couple of days of training.

I started off as a schoolteacher, a phys-ed teacher - 1961 was my first year of teaching, through to about 1964. But then you might do one-third of the year or something, the rest you'd be playing cricket. After that I got into the financial world in 1965.

There were others who were very difficult to get out, like Barrington and Boycott. But you weren't worried they would take you apart. Richards or those others, if they were going, they could take you on. But they would give you a chance, so it was probably a bit more interesting. You'd get a bit sick of bowling to someone like Ken Barrington.

Having a fairly easy action, all of a sudden one would click and come through faster. People said I was deceptively quick. 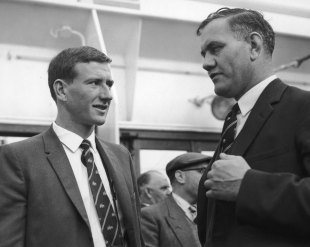 In the mid-1960s, India didn't cater for tourists as much, so you didn't have the home comforts. I've been back to India a few times since and I've really enjoyed it. I've been back on a holiday and we went to the Commonwealth Games.

[After the India tour] we went straight on to South Africa. I picked up a bug right at the end of the Indian tour. I was weakened for the whole South African trip. They couldn't diagnose what it was. I could play, but I wasn't quite right. It was pretty disappointing.

In those times they'd just put you out and wouldn't give you a break. You bowled many more overs than they do now leading up to a Test match. You couldn't really train because you were tired out from the other matches. You just played match after match.

I don't regret it. There are some things you can't buy.