'If I write a book, a lot of people will get hurt'

Andy Roberts was all about pace and deadly accuracy. And he spoke his mind, even if it cost him a few years at the top 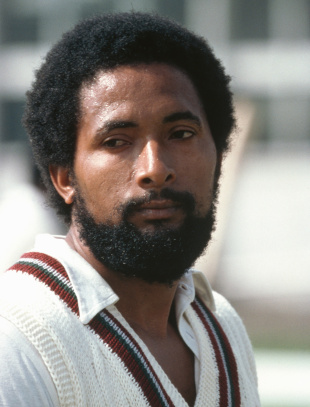 If you hit me for a four, what am I going to smile about? A lot of people did not understand me because I was not smiling, not showing emotion. They did not know what to expect.

I once read an article in the Sunday People by Fred Trueman, saying Roberts is a good bowler but he could be a great bowler if he brought his arms a bit higher. There is a photograph of me with both my arms wide and a long way off the ground in the delivery stride. I went back to the nets and just practised and practised for about a year till I got the arm higher. When I did that I started to bowl outswingers. I became a better bowler but not as fast I was in 1974 and early 1975.

I don't know who chose pink for the West Indian colours in World Series Cricket! We had pink shirts, pink sweaters, pink pants, pink pads, pink boots. The only thing that wasn't pink was the bat. We got a lot of whistles.

I bowled with the new ball right through till the Kolkata Test match in 1983, when I told Malcolm Marshall he would take the new ball.

In 1972, Viv Richards and myself came to visit the Alf Gover School. Brian Jacobs, a fellow Antiguan, wrote to Hampshire, asking them to take a look at me. He organised for both of us [Roberts and Richards] to come to England. I will forever be grateful to him.

I looked at the batsman as someone who was standing in my way of winning a Test match.

Michael Holding has spoken about how I helped him get his first Test wicket. We were in Australia. Mikey had bowled well in the first Test, in Brisbane. Didn't get a wicket. He bowled well in Perth in the second Test but was still struggling to get a wicket. He was bowling at Max Walker. Bowling into the wind. I asked him why he was not bowling the short ball. He said he couldn't. I told him, "Run in, bowl him the short ball. Bowl on the off stump." He could make the ball bounce from close to the stumps. And he got his first wicket just by putting in the extra effort. A lot of us fast bowlers refused to put in that extra effort.

I represented Leeward Islands when I started playing cricket, because that was the only way to get into the West Indies team. We had a tournament called the Leeward Islands tournament. I would represent Antigua in that tournament. Then we would play for the Combined Islands [Leeward and Windward] to make the national team. I was the first Antiguan to play for West Indies. Viv was the second.

No one can take away from me what I have.

On the 1983 tour [of India], Richie Richardson lost his luggage. He travelled for two weeks with hardly any clothes, and the management did hardly anything about it. I told them that is wrong. Even in the nets he was getting ignored. Our batting order was: Greenidge, Haynes, Richards, Gomes, Lloyd and Dujon. Richie was the third opener. He would come only after the bowlers had finished batting. He would have part-timers bowling to him. It was unfair to the young man to bat after the bowlers, and also, importantly, it was wrong for him to know he was not in the playing XI the day before the Test. I told him I would bowl at him to make sure he got some proper practice.

Our administrators do not really like people who speak their minds. I learned that a long time ago. It is best to get it off your chest. You feel a lot better. That is what pushed me to retire. I did not retire. I was forced into retirement. And that is because I spoke my mind.

When I was 17 or 18, I worked for a beverage company called Fruity, as a salesman. I did not play competitive first-class cricket in Antigua. I played for my local parish. When I went for the trials, they called me Fruity.

I rate a batsman not by the amount of runs he has made but by the way he plays. Graham Gooch's 123 at Lord's against West Indies in 1980 was a very good innings. He was not afraid to play his shots.

"The tour of New Zealand, when Mikey kicked the stumps, got a lot of mileage, but Australia in 1975-76 was bad. Those guys were literally bowling six inches over the crease and were not called no-balls"

I know when I went to India in 1974 I could bowl as fast as anybody.

In the first year of World Series Cricket, in 1977, we beat everybody. In the second year we were being beaten left, right and centre. Kerry Packer realised the success of WSC had a lot of do with the success of West Indies. Before a match in Melbourne, Packer came to the changing room and had a few choice words to say. No one spoke a word. After that we did not lose a match.

I could turn around from six feet and bowl almost as fast as I bowled off 19 paces. I used to put my entire body in it, and I used to jump a lot.

The 5-1 Test series loss to Australia [in 1975-76] no doubt hurt very much. At the end of the tour Ian Chappell said there was no difference between the two teams. But there was a difference: the two umpires were the difference. The umpiring was bad.

I started playing hard-ball cricket when I was 16.

My final tour was the away series in India in 1983. Before going there I had a knee operation at the end of the English county season. I worked hard but I was partially fit before coming to India. I developed a back strain on the trip so I opted out of the first Test. I told the tour committee that I would not be able to last five days. I wasn't included before the fifth Test. I know somebody did not want me to play. I had my differences with Clive Lloyd, the captain.

I had six weeks' coaching in my entire life. Never was coached before and never coached after those six weeks. Gover taught me the value of the follow-through. That is how you get your entire body behind the delivery in your follow-through.

Playing for Hampshire taught me a lot about bowling because we had to bowl a lot on uncovered wickets. And it is not easy because the faster you bowl and the shorter you bowl, the less you get out of uncovered pitches. That is because the pitch is damp and the ball just sits. So I used to bowl full and straight on any pitch.

It was never about me. It was always about the team.

I always look back at Leeds 1976 as my best performance. I only got three wickets in that Test match, but it was the value of those three wickets that mattered. We had scored 437 on the first day. England bowled us out for 196 the second time round. They needed 260 to win with a day and a session remaining. I got a wicket in my first over and then in my third and fourth overs. And my first ball to new man and debutant Peter Willey - I know he was out. The umpire said it was not out and I did not get any more wickets. But the mood I was in at that moment, if Willey had been given out, I think England would have lost that afternoon. That was the best spell I bowled in Test cricket.

Dale Steyn is like me. You hardly ever see him smile because he has work to do.

It was due to WSC that Dennis Waight, the trainer, came to West Indies, and that is how we began focusing on fitness.

Allen Stanford was all about making money. Packer was not about money - all he wanted was television rights. The moment he got those rights he disbanded WSC.

Anything against Australia spurred me on because of 1975-76. The tour of New Zealand, when Mikey kicked the stumps, got a lot of mileage, but Australia in 1975-76 was bad. Those guys were literally bowling six inches over the crease and were not called no-balls. That hurt more.

I see coaches asking bowlers to stop their leading arm by their legs. You get more power in your delivery by letting your arm go through, not by cutting short the flow of your leading arm.

My best moment was getting the Chappell brothers out off successive deliveries in Adelaide during the 1979-80 series: Ian, caught at slip, set up by a bouncer; Greg, caught off a first-ball bouncer.

Celebration? I don't know. I was happy I got the wicket. I would just go back to bowl again. 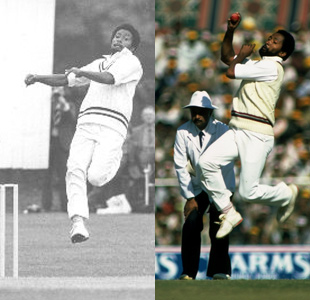 Roberts worked to lift his arm higher and closer to his body, on the advice of Fred Trueman

I have been fishing from the time I went to primary school. I used to go out with my father. There is nothing else I would like to do right now.

I was in the manager's room in Kolkata [in 1983]. I was told that the selectors back home said that I was not fit to go to Australia later that year. How did they deem I was unfit? I had played all the matches, every single one outside of the Test matches in India. I learned afterwards that I was only included for the Kolkata Test because they thought I could get to 200 Test wickets. I had 197 before that match. It hurt. I knew I was fit and could have played for another two or three years. Ironically, I played a match-saving hand in Kolkata.

A bouncer is not a ball to hit a batsman with. It is a wicket-taking delivery.

The best I batted for West Indies was in WSC in the Supertest in Jamaica in 1979. Australia had us on the run and it was the second innings. I combined well with Clive in a 226-run partnership for the sixth wicket. But he ran me out while trying to get away from Jeff Thomson. He hit the ball straight to Trevor Chappell at short cover and ran. I could not make my ground. I was 89 run out.

How can you learn if you don't watch or read?