'Why bother to change your style as long as you're scoring?'

Mike Smith, who played cricket and rugby for England, looks back at his days at Oxford, of sea travel, and fielding at short leg 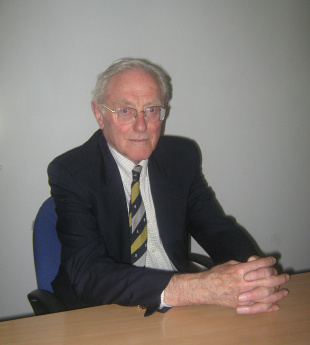 I am a double-international but my international rugby career was limited to just one appearance. I played as an outside centre against Wales during my final year at Oxford. But I had a poor game and was not selected again.

I owe a lot to HE Packer for my early development in cricket as well as rugby. He was my first coach and ran both cricket and rugby at my school in Stamford, Lincolnshire.

I had great success during my Oxford University period. I scored a hundred in each of the three Varsity matches (in 1954, '55 and '56) - breaking a record held by the Nawab of Pataudi Sr since 1931.

There is no formula to be a successful captain. It depends largely on two factors: Your resources - that is, your players, and the particular conditions - the pitch and the weather. The captain has to utilise the resources and conditions as well as he can.

I fielded a lot at forward short leg. In those non-helmet days, it was quite a dangerous position. I once broke my wrist while trying to save my face. My England and Warwickshire team-mates often said how seeing their captain field at forward short leg really inspired them.

In the early part of my career, the wickets were uncovered and the wet conditions made batting difficult. But I enjoyed it as it offered a greater challenge.

In those days, long sea journeys and unsatisfactory living conditions in some countries led to players absenting themselves for quite a few trips, but I always loved touring, no matter what the destination.

I held ten catches in the Test series against South Africa in 1964-65. Some of those were quite difficult, fielding at forward short leg to the bowling of offspinners Titmus and Allen. That first Test victory enabled us to win the series. I also had a good time with the bat. I was the South African Cricket Annual Cricketer of the Year.

Quite early in my cricketing career, I started thinking of a career in cricket administration once my playing days were over. In 1956, I left Leicestershire to join Warwickshire, since Edgbaston was a Test centre, so there would be more opportunities for an administrative role.

I consider myself lucky that during my stint as a match referee in Tests and ODIs from 1991 to 1996, I encountered no problems and it all went free of any controversy.

I played a little first-class rugby, mostly when I was at Oxford. The cricketing commitments made it difficult. I made only two rugby tours (with the Combined Universities rugby side), to East Africa and South America. For club rugby, I mainly appeared for Hinckley. I played little rugby after my Oxford days and retired from the game in 1960.

During the 1963-64 tour of India, because of injuries and illnesses, things got so bad on the eve of the second Test in Madras that we didn't have 11 fit players. But on the morning of the first day Mickey Stewart returned from hospital. We had asked the famous sports journalist Henry Blofeld, who was covering the tour for the Guardian, to be ready to play.

My son, Neil Smith, played a few ODIs, including in a World Cup. However he made me proud by captaining Warwickshire - the first time a father and son both captained the county.

I studied geography at Oxford but didn't really use the degree.

I consider myself fortunate that Warwickshire had unprecedented success during my tenure as the chairman of the club (1991-2003). We were county champions for the first time since 1972 in successive seasons, 1994 and 95. We also twice won each of the three limited-overs competitions. The committee brought in excellent coaches like Bob Woolmer, Bob Cottam, Phil Neale and David Brown at various times. Brown brought in Allan Donald, who was a big influence. In 1994, with Brian Lara on our rolls, Warwickshire won three of the four competitions and lost in the final of the fourth.

I played first-class cricket for 25 years. In our time, the players hardly did any physical exercises, gym, etc. We kept ourselves fit only through playing cricket and cricket, long season and long tours.

After the 1967 season I decided to take time off from big cricket. I was getting stale and needed a break. Cricket, even at the top level, didn't pay you much, so I was also looking for some career outside cricket. For the next two years I worked for DH Robbins, who were making pre-fabricated buildings. I was involved in selling. I played mainly Sunday league games and featured in just three first-class games. I resumed playing for Warwickshire in 1970.

"GIasses were never a hindrance to my cricket. I started wearing them at 17. However, for obvious reasons, I didn't put them on while playing rugby"

The 1964-65 South Africa tour was my most memorable series because as it was successful for the team and I did well too.

My first full-time employment was with Warwickshire county. Later, I had a business outside Warwick. I set up a country club with hotel and sports facilities - mainly squash but also tennis.

In our days, sea was often the major route of travel and flights were few. So, often suitable replacements on overseas tour were hard to come by. During the South African tour of 1964-65, the long unfit list meant we had no choice but to call Ken Palmer, coaching in Johannesburg at that time, for his first and last Test.

Denis Compton was my first sporting hero - spectacular as well as a great entertainer.

I made my first-class debut for Leicestershire, the county of my birth, in 1951, immediately after leaving school. But I had played just three games when I was called up for compulsory military service.

My experience as manager of England was not good. I managed two full tours of England, to the West Indies [1993-94] and Australia [1994-95]. We lost both to better sides.

In our times, it was odd to go to a prestigious university like Oxford and then become a pro cricketer. Today, the ratio of graduates of major universities playing professional cricket is higher.

My final Test appearance was in 1972. That makes me England's last double international in major sports.

I captained England in half of the Tests I played.

The 1963-64 tour of India was quite challenging. Ted Dexter excused himself as he was standing for parliament, and [Colin] Cowdrey withdrew because of family reasons [though he joined midway]. I was without [Fred] Trueman and [Brian] Statham, a number of players got unfit, and I lost the toss in all five Tests. Considering all this, drawing all the Tests was a considerable achievement. I also made 306 runs.

GIasses were never a hindrance to my cricket. I started wearing them at 17. However, for obvious reasons, I didn't put them on while playing rugby.

Nineteen-fifty-nine was easily my most memorable domestic season. I became the first player in ten years to score 3000 runs in a season. Warwickshire, who had finished 16th the previous season, remained hot contenders for the championships until late in the season, finishing fourth in the end. I also took a Warwick record of 42 catches. Excellent weather for most of the summer also helped, as little time was lost due to rain. And I was named Wisden Cricketer of the Year in 1960.

I was mainly an on-side player. That came naturally to me. Some said MJK has a limited range of strokes. But why bother to change the style as long as you're scoring?

Some say military service disrupted their sporting career but I really flourished during those two years. The military environment was really conducive, and I played a lot of quality cricket and rugby there, though no representative cricket. 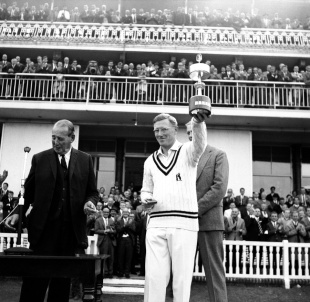 Smith with the Gillette Cup in 1966 © PA Photos

I led Warwickshire to their first Gillette Cup win, in 1966, after we had lost the final in 1964. In the County Championship, we couldn't lift the title despite coming close quite a few times: third, fourth and second from 1962 to 1964. Still, it was the club's best spell in the period between the two title victories - 1951 and 1972.

Lord's is my favourite ground and I always enjoyed playing there. It has tradition, history and atmosphere.

I have had no role in the Warwickshire management since 2003. The county constitution doesn't allow people to hold office after the age of 70.

Though I only saw him on the TV, Shane Warne was a real joy to watch. He kept you interested all the time. He was perhaps the finest slow bowler the game has ever seen.

T20 is not necessarily the game I would go to watch - perhaps the general attitude of people of my generation. That said, if cricket was my business, I would have been supporting T20.