'It felt like England feared getting out to the Dutch'

For one fine day in 2009, cricket was the biggest news in Holland

The opening match of the 2009 World Twenty20 was between hosts England and minnows Netherlands. Had the ICC goofed up in the scheduling? Tom de Grooth, Netherlands batsman We had worked hard for a year going into the match. We knew the first match of the tournament was the most important, since the eyes of the world would be on it. We were really hyped up. Even though it was raining and normally such a day would be frustrating, I knew we would get a game of cricket. It was the biggest game of our life.

Ryan ten Doeschate, Netherlands allrounder Going into the game I remember being asked what our chances were. We knew it would be a major upset to beat them. I remember specifically at the time we saw it as an opportunity to expand the game in Holland. It was the showpiece match, opening game of the World Cup, against the host nation, at the home of cricket. It was absolutely amazing.

Dirk Nannes, Netherlands fast bowler It was my first international match. It was a new, unusual experience for me because I was coming from Victoria, a professional set-up, to an amateur one with the Dutch. Going into the match, I don't think anyone had expectations of winning. We had expectations of giving a good account of ourselves.

England benched Kevin Pietersen, Graeme Swann and Dmitri Mascarenhas. The local media later said it was the wrong decision - one that smelt of complacency

James Foster, England wicketkeeper It was not a case of complacency. With the talent and experience in that England team, we were confident to win the game. Kevin had an injury and he couldn't be risked playing that game.

Ten Doeschate Pietersen's omission was obviously a big statement, but I believe he was injured. There were a few guys in their team who were not yet established. It was not the powerhouse you associated with England batting. The Pietersen omission was a massive boost to us.

Pietersen's absence was forgotten when Luke Wright and Ravi Bopara gave England a flying start, piling up a record opening partnership of 102 runs - still the second-highest for England in Twenty20.

NannesThe first ball of the match went for four against me. They were just smashing - 200, maybe, I feared at one point.

Ten Doeschate Definitely 200 was on the cards, I felt, from the way Wright and Ravi started the innings. Dirk Nannes was playing his first match for the Netherlands. It was a big shot in the arm for us. We were relying very heavily on him. He was bowling very fast, but the England openers were up for the job. The ball was flying around in the first ten overs, Ravi hit some lovely cut shots, as did Wright. We were scratching our heads, anticipating a hiding.

Foster Sitting in the dugout, I felt after the century-plus opening partnership, we had a good foundation to build on.

Incredibly, England then faltered. They managed just 73 runs off the final ten overs. Despite the short boundaries, no sixes were hit. England missed their power-hitters like Pietersen and Mascarenhas. Instead Robert Key, a top-order batsman, playing his debut T20 international, had come in at No. 6.

Foster Rob Key had come in for Kevin. But due to the big opening partnership we changed our batting order and Key was forced down the order. Also, the Dutch bowled really well in the last overs.

Ten Doeschate Suddenly when we picked up a few wickets, England's approach changed. They seemed happy knocking around for a few overs. We fielded well, bowled well, and England finished with a score which, though good, was not the floodgates we had imagined at the ten-over mark. Maybe they thought it was against Holland, and their guys were looking to play an innings of substance to keep their place in future games. I don't know what it was but it was a very strange way to go about it. If you walk in at 110 for 1, you think you just keep going hard and post 200. But they were reluctant to hit the long ball, and that obviously played into our hands by slowing the scoring rate.

Nannes In the middle overs they were so conservative. It felt like they had this fear about getting out to the Dutch. They were just kind of cruising along, thinking no matter what they made, they were going to win the game. I remember standing out there in the field wondering the England batsmen were not even trying. Rob Key was taking singles in those last overs.

But could Netherlands chase down the target? De Grooth We had come off the field having a feeling we had done quite well to restrict them to 162. Everybody was quite hyped up. There was a lot of adrenaline. We just said there was no point in getting 130 or 140. We might as well finish 80 for 6 or get to the target.

Nannes We can't score 162, not against their attack, I felt, sitting there.

Netherlands lost their first wicket in the first over but Darron Reekers' belligerent cameo revived the innings. And then de Grooth played the innings of his life. Originally slotted to come in at No. 7, he was promoted ahead of hitters like ten Doeschate.

De GroothThe plan was, and had been for a few matches, that if we lost early wickets we would stabilise and I would come in. So we could keep Ryan for the last six overs to finish off the game. From ball one I had to hit really well and clean. We wanted to save energy to run between the wickets. If anything, we told each other that we should not be over-aggressive but make sure we scored off every ball. I did not pick on any particular bowler. I had come in early to face the new ball, but towards the end of the Powerplay I started to up my momentum and keep it going.

When I walked in I told Bas [Zuiderent] that I would play my natural game, which was to consolidate. But that was good and well for a couple of balls. When I started hitting the ball really well, I started feeling good. So I told him I was feeling so good I was just going to continue and not be afraid of losing my wicket. Even after the Powerplay we decided to keep doing what we were doing and see where we end up.

When we had 100, I looked up at the scoreboard and noticed we were ahead of the D/L target. As long as you are in front of that, you know that you are on target for a good chase. It is a sort of guideline. That is when we felt, "Hang on, we could really pull this off", because we had good batting depth. That is when I felt something big could really happen.

Foster We didn't have much idea about their batsmen. But they were talented and were hitting in slightly unusual areas. Some of them were successful field hockey players, so they played the sweep, reverse sweep and used their wrists. De Grooth had really good ball-striking abilities. They took risks, sweeping our legspinner Adil Rashid - something I felt was a risk, but they were willing to take it.

Nannes The guys just kept on scoring. Every nick and nudge slipped through for four or dropped short of a fielder, or a run-out was missed. At the ten-over mark I sat there and wondered when the rot was going to start setting in in our chase. But that never came. It was a case of "Let's play brave cricket and see how close we can get."

As Netherlands became bolder with every ball, England started to get edgy.

De Grooth The longer we were out there and the closer we got, I could feel England got tense and started talking more and more among themselves. In the beginning they got three early wickets and with each they felt they were on top. But when every new batsman who came out pretty much scored straightaway, you could feel the tension building up on them.

Thirty-five off five overs. Thirty off four. Twenty-one off three. Seventeen off two. When Stuart Broad took the ball to deliver the final over, Netherlands needed seven runs. Ten Doeschate and Edgar Schiferli decided they were going to run for their lives every ball. Broad, having missed a return catch and two run-out chances, had another shy at the stumps off the final ball when Netherlands needed two to win.

Ten Doeschate We knew he was going to go full and wide. I had never faced something like that and walked across my stumps and hit over mid-on. But the angle was pretty unique. They had a few chances to run us both out, but we were lucky. There were a three ludicrous singles we took in that over. And off the final delivery we were always going to run. Schiferli dinked one back to Broad, who missed hitting the stumps. When I turned back to scamper home I saw the ball trickling to Key in the deep. There was no one to back up.

Foster Broady came from around the wicket to use the angle and bowl wide to get the dots. A couple of the balls came to me even as they ran for the singles. In hindsight I probably should have stood up to the stumps. On that last ball everything happened so fast. Broady took a shy at the stumps, and I might have done the same. People might say if he had just allowed the single, the match would have gone into the Super Over. But if he hit the stumps, we would have won. It was a risk worth taking.

It was the biggest upset by an Associate since Ireland had shocked Pakistan in the 2007 World Cup. The Dutch painted London orange that evening. The next morning the amateur cricketers' faces were all over the front and back pages of the newspapers, both in England and back home.

De Grooth It was the biggest victory in Dutch cricket. It taught us that we could compete at the highest level. It was one big party in a way, where we achieved something that we always knew we could do but nobody actually believed we could. It was one of the best days of cricket I played. For a day it was the biggest news back in Holland, but just for a day. 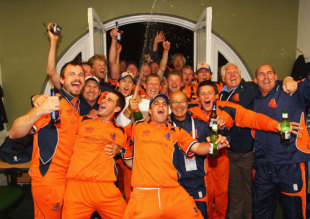 Nannes This game is the absolute highlight of my career. The bar at the team hotel, no one could fit into. Anyone who was Dutch in London was there. As far as the players go, the feelings were a mix of being overjoyed and worried. A lot of the Dutch players had taken about two weeks' leave from work to play the tournament. They were worried because if we qualified for the Super Eights, they would need to take more time off work.

Ten Doeschate There was this genuine sense of disbelief at what we had accomplished. As for England, I never felt they were cocky or arrogant or complacent. To be fair, two of the Dutch boys [de Grooth and Borren] played the innings of their lives. It was a more a case of Holland playing well and maybe just stunning England with our approach and our guts.

Foster It was sombre in the England dressing room. A bit of a shock it was. The Dutch played exceptional cricket. They had a no-fear policy. They had nothing to lose.