When Chandra took the best figures of his career, only for India to lose the match to England "Not just confident, we were a little bit over-confident," Ajit Wadekar said of the Indian team's mindset on the eve of the 1972-73 home series against England, who were led by Tony Lewis.

India were perhaps encouraged in their complacency by the fact that, for England, it was not a tour many wanted to be on. Ray Illingworth, who was England captain when Wadekar's Indians won the series in England the previous year, six months after their historic win in West Indies, had decided not to make himself available, and so had Geoffrey Boycott. Lewis, who was 34 years old, had enjoyed a successful three years as captain at Glamorgan, but he took up the England job knowing he was not going to be in it for long.

"The side involved several experiments because the selectors were building up to the next Australian tour in 1974," Lewis recalled. "That left some older players back home. The selectors choose an embryo team." Indeed, no one in the England squad had played in India. Only Alan Knott and Derek Underwood had played more than 20 Test matches. Only Knott had made a Test century.

The teams started the series with contrasting mindsets. "We had not had much practice, not having a camp where we could have been together, which would have helped team bonding," Wadekar said. "We did ask for a camp but the BCCI did not take it seriously. After our return from the wins the previous season, our feet were not on the ground."

England did well to draw the three warm-up matches before the first Test in Delhi, but their ambitions were modest. "The dominant feeling was a defensive one," Lewis wrote in his book Playing Days. "We should make the Indians fight for their runs and we should be happy with a draw in the first Test. It would buy time until we are on top of our game in foreign conditions."

Lewis had made his first-class debut 17 years before and now stood on the brink of not only playing his first Test but also leading England. However, an injury now put his place in doubt. "I had pulled a small muscle in the middle of my calf fielding during the warm-up match in Indore. Bernard Thomas, the team physio, had strapped me from ankle to knee. He had put layers of rubber padding under the heel in my shoe so that I wouldn't pull the muscle again," he recollected. He had asked his deputy, Mike Denness, to be prepared to fill in, but Lewis passed his fitness test come match day.

He had his team in his head. He told Norman Gifford and Jack Birkenshaw that they would be benched in favour of the first-choice spin combination of Pat Pocock and Derek Underwood. The pair took it in their stride and even showed good spirit, telling their captain that they were prepared "to offer a special service to anyone who admits to being a Test batsman". They even had business cards printed, reading "Messrs Gizzard and Birkenshaw Ltd - Net Bowlers".

Wadekar elected to bat first. The pitch was brown but Geoff Arnold, the England fast bowler, made good use of seam-friendly conditions in the first session. India were 20 for 3 in no time.

"It was overcast. The pitch was rolled mud without any grass. The ball after pitching made some indentations, which assisted in some movement," Arnold recalled. Ramnath Parkar was caught in the deep, hooking. Sunil Gavaskar, who had been among the heroes in the series in England, did not last long, edging to slip, and Wadekar was beaten by the swing. Arnold also got Dilip Sardesai immediately after lunch.

"Horsey [Arnold] got good movement with his pace," Wadekar said. "I was trying to play him on the back foot, trying to put it in the off side, but the ball came in sharply and I got an inner edge and got bowled. He was swinging the ball extremely well."

India finished on 173, a low score, but England had to tackle the might of the Indian spin trio of Bhagwath Chandrasekhar, Bishan Bedi and S Venkataraghavan.

They started well: the opening pair of Barry Wood and Dennis Amiss seemed comfortable, raising a half-century stand. But as the ball lost its shine, the spinners came into play and Chandrasekhar imposed himself steadily.

When Lewis walked in, he was nervous. "It felt strange to be Welsh and yet playing for Englnad. All my life at home, England has been the opposition," he wrote in his diary. He lasted just two balls, adjudged lbw to Chandrasekhar. Lewis felt he was robbed. "It was disappointing because I couldn't possibly have been out. Even Tiger Pataudi, who I think was a spectator in the press box, said I couldn't have been out," he said. "Chandra was bowling these googlies, which came in to the bat. I swept one of them from outside the off stump. And, you know, if the ball hits the pad outside off and you are playing a shot, you can't be out. So it was a bit of a shock for me; that lasted for a few days."

Only Tony Greig, who was enjoying his first tour of India, gelling with the excited crowds, played the Indian spinners confidently. He read Chandra, who finished with career-best figures of 8 for 79, better than his team-mates. According to Lewis, Greig's long stride helped him stretch further and get to the pitch of the ball, unlike the rest of the England batsmen, who would plunge forward too late. Greig was instrumental in England gaining a 27-run lead.

By now the pitch was taking increasing amounts of turn. England had already seen S Venkatraghavan, not a huge tweaker of the ball, bowl from the around the stumps and get good spin. When their turn came, Pocock and Underwood dominated the Indians, with a tight line and no width. "We had done our research and we worked quite hard and made it difficult for them," Lewis said. The only significant resistance England encountered was a 103-run partnership for the sixth wicket between Farokh Engineer and Eknath Solkar.

With 207 for victory England had to go for the win. "It was very tense with the ball doing much more for the spinners," Lewis said. "And there was plenty there to keep India optimistic and going hard for victory, and they probably expected to [win]. But we batted particularly well." 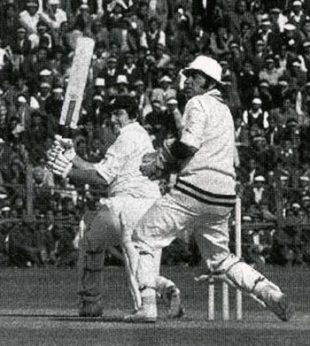 His top order failed him again, though. Bishan Bedi got to the landmark of 100 Test wickets, accounting for Amiss and Keith Fletcher, who was out for a duck.

England needed 101 runs with seven wickets in hand on the final day - Christmas Monday. Lewis, unbeaten on 17, spent a restless Sunday night. He had started off on an edgy note, taking six overs to get off the mark. The first run, a push toward mid-off, had seemed endless to him: as if the stumps at the non-striker's end had been pushed back to the boundary rope. But he remained positive.

Lewis had been the highest run scorer in a Commonwealth team led by Richie Benaud to Pakistan in 1968. He had been brought up on uncovered pitches and was used to the turning ball at Glamorgan. And he had Greig for company. The two milked the slow bowlers, steering clear of doing anything flashy.

"If you have a haze of close fielders, you play the strokes through them and pretend as if the fielder is not there," Lewis said. "By staying there and taking the singles, we knew that Wadekar would eventually feel the heat of not having enough runs and withdraw a bit."

Engineer kept up a steady chirping from behind the stumps, but Lewis was not to be distracted. He eventually entered the history books as a winning captain on Test debut. "It was quite a mature performance from a team that was totally underrated. It could be that the Indians had underestimated us," Lewis said.

"They were overjoyed," Wadekar remembered. "They never expected to take the series lead. We never expected Arnold and England to play so well. We were taken aback. Our batting did not click and our senior batsmen did not perform, but we managed to bounce back and win the series."

As he sat quietly sipping champagne after the match, Lewis raised a toast to the man in the corner - Thomas, who had a glass of orange juice in hand - for the Christmas miracle. "What I do every Christmas morning is wake up with a smile on my face," Lewis said. "Even now. It lasts forever. It has been 40 years."

Thanks to the MCC Library at Lord's