Sri Lanka's last Test tour to Australia, in 2007, returned a 2-0 loss, but the final innings of the series produced the best Test performance by a Sri Lankan in Australia. As the team return to Hobart in 2012, Kumar Sangakkara's 192 there will be a source of fond memories not only for the man himself, but for fans, who have not seen a fight as fierce from a Sri Lankan on Australian soil. 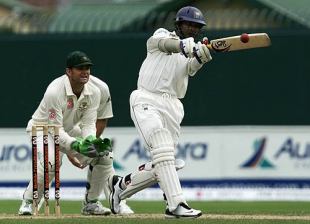 "Rather than playing on the front foot, it was a case of making sure I cut and pulled well" © Getty Images

Sangakkara's tour began poorly, when he was injured after just three balls in Sri Lanka's first tour match, in Adelaide.

I was more worried about not being able to play a Test match rather than adjusting to Australian conditions, but that time off was useful. I strained my hamstring and was out for about 17 days, but that time was used to recover and also to bat a lot in the side nets and hit a lot of throwdowns with Trevor Bayliss. I faced a lot of net bowling with Lasith Malinga and with the bowling machine. Those days were spent working really hard with a view to getting ready for the second Test. The selectors and the staff had a chat and they thought it was worth the risk of keeping me on.

In the first Test, in Brisbane, Sri Lanka stumbled to an innings-and-40-run loss. In Sangakkara's absence only two Sri Lanka batsmen got past 50 on a pitch on which three Australia batsmen hit hundreds.

The Australians played really well in that game and outplayed us completely, and the wicket didn't offer any help to our spin attack, which was our strength at the time. Lasith Malinga didn't play in that Test match either. It was not pleasant sitting on the sidelines, but it was also more motivation to get ready for the next Test match.

We had resigned ourselves to the fact that we didn't play well in the first Test, and tried to up our standards in the second. It was just a case of learning and preparing again for a big challenge in Hobart.

Australia won the toss and amassed 542 for 5 declared in Hobart, with centuries to Phil Jaques and Michael Hussey. Sangakkara's first-innings 57 came from 76 balls and had its moments of fortune, including being dropped by Adam Gilchrist on 13.

I was a bit rusty to start off with. I had to get my feet going and get used to facing good bowlers consistently. In those conditions, you need a bit of luck to go your way. I got a 60 and managed to hit one to gully when I was really backing myself and getting into a good rhythm.

I hit Mitchell Johnson to Michael Hussey. That was not pleasant because I knew I had had a bit of good fortune to get there and then it was really up to me to try and kick on further. Thankfully Mahela [Jayawardene] got a century in that first innings and got us to an okay total.

Sangakkara took mental notes from his time at the crease in the first innings, observing both the bowlers' strengths and the nature of the surface, filing the information away for the second dig.

Johnson and [Brett] Lee had swing early on and pace right throughout, whereas Stuart Clark was more medium pace and movement off the seam. It was a case of getting used to what they were bowling and backing myself to get behind the ball.

You had to make sure that, when you drove, you were right on the ball. Your head's got to be right over it and your foot's got to be right there, because with that bounce, even if you were slightly off the ball there was always the chance the ball would carry to the slips.

"That was a special day for me. Everything clicked and worked. It was very easy for me to hit those shots because I was in the zone - in that space where everything goes right"

Rather than playing on the front foot, it was a case of making sure I cut and pulled well and looked for the right ball to drive.

Sri Lanka were dismissed for 246 in the first innings, but Australia chose to bat again, and piled on a further 210, setting Sri Lanka 507 to win in just over five sessions.

When we went out to bat a second time I don't think anyone thought of anything too far ahead, in terms of winning or batting for a draw. It was a case of getting through, session by session and getting as close as possible. There was never a conscious idea of "We are going to bat x amount of time", because that's difficult to do. Rather: get going, assess, and continue that way.

Sri Lanka began positively, getting to 100 in the 26th over. Marvan Atapattu was playing his final international innings, and Sangakkara was alongside him for much of day four, having come in at 15 for 1, and they played out a full afternoon session together.

You have to be positive against an attack like that. They had attacking fields all the time and had a lot of bowling options, so if you are positive and you get away with that, it sets you up to really dominate an innings.

The chase was a steep one - we would have had to achieve the biggest fourth innings total ever to win a match, and it would have been very easy to fall into the trap of shutting down the scoring. But we actively looked to score runs whenever we could.

When we were about 150 for 1, batting with Marvan, it was just a question of getting through that final spell of Brett Lee's, because he was bowling well. We wanted to be 220 for 1 at the end of the day, to have a realistic chance of chasing down the total. But unfortunately Marvan got out in what was probably Lee's last over, and then Mahela got out soon after, first ball. That really set us back.

Sanath Jayasuriya came in at No. 5 and began to attack. His belligerence sparked aggression from Sangakkara as well. The pair scored at more than five an over for the first 15 overs of their partnership and finished the day at 247 for 3 - 260 more runs needed to win on the final day.

It definitely makes things easier when someone is scoring quickly at the other end, and I think that partnership with Sanath set me up for that final day. I got to 100 before stumps, and while it would have been better to not have lost those two quick wickets in that session, I felt I was batting well and we weren't in the worst position.

Early on the fifth morning Jayasuriya departed for 45, and two wickets fell off consecutive balls soon after. Sangakkara was left in the company of the tail and Australia with little to do to achieve a series whitewash.

When the second new ball came around, Sanath got out and we let two quick wickets fall. It was a big setback to see those guys get out off consecutive balls, and Prasanna [Jayawardene] offering no stroke to Mitchell Johnson.

It was just a case of trying to set a base, but unfortunately we lost too many wickets. I just had to do what I had to do. I couldn't control what happened at the other end, but I could control my end.

I had tried to retrain my eyes and feet on the fifth morning, giving myself the best chance of really making a big score, but I had to change that approach. When I was batting with Farveez Maharoof and Lasith, we just tried to get as many runs as quickly as possible. It helped that the wicket had flattened out. The bowlers were still bowling well, but they had to really work hard.

I tried to be a lot more attacking and farm the strike as much as possible and try and hit as many boundaries as possible, because they had pretty attacking fields. If the field was up, I'd go for boundaries, and when the field was down, I'd try to get down the other end on the fifth ball.

Sangakkara backed away to smite Mitchell Johnson over cover for six, to surpass Aravinda de Silva's 167 in 1989, which had been the highest innings score by a Sri Lankan in Australia.

It was probably Stuart MacGill that I wanted to take as many runs from as possible. He wasn't bowling that well. He had had a few injuries and was coming back from that and wasn't bowling as well as he usually did. My target was to dominate him.

I tried to give a little more respect to the whole pace attack. They were bowling really well as a unit and I had to play them on merit, but because I was in really good touch I managed to hit some boundaries off them as well.

My feet were moving well and I was getting behind the ball nicely. It was a case of having batted a full day before and having become used to the pitch and the Australian bowling, and I had played myself into form. 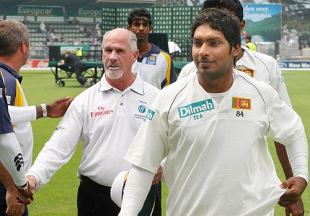 Sangakkara's use of the lofted cover drive off the pacemen was striking, and the shot brought him several boundaries on the final day. His glides through point and behind gully were also productive.

You have good days and bad days, and then some days when you are able to do things that you normally can't. That was a special day for me. Everything clicked and worked. It was very easy for me to hit those shots because I was in the zone - in that space where everything goes right. Lasith was holding up one end as best as he could and that gave me the freedom to attack from the other.

I think in the end we got closer to their total than we thought we would.

Sangakkara was moving swiftly towards a double-century when he was wrongly given out on 192. He had made a double-hundred in each of his previous matches, and was on course to become the first player in history to make double-hundreds in three consecutive matches.

I think you do definitely look at personal milestones like that, and I was targeting 200. The ball that got me out was a bouncer and I was a bit too quick on it, and I was through the hook shot when the ball got to me. When the finger went up I was very disappointed and there was a bit of anger. But what can you do when you get given out like that? I just trudged off and it took me a little while to cool down.

Rudi Koertzen, who had given the decision, apologised to Sangakkara after learning he had been wrong.

It was easy to accept his apology. It was very nice of him to come and talk to me at the end of the day. I respected him as an umpire because he was a very good umpire. It was just a mistake, and these things happen at either end.

Sri Lanka were eventually all out for 410, 97 short of victory. It was, and remains, their highest fourth-innings total.

I guess you're left wondering about what could have happened if I could have kept going, but that was definitely one of my best innings. Under pressure, against an attack like that, I rate it very highly.