'I had the confidence that I could clear any ground'

He may not have played T20, but Asanka Gurusinha would have fit right in if he had 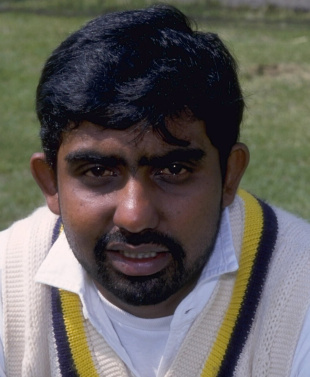 Asanka Gurusinha: "I never had dreams outside of cricket as a kid. I always wanted to play for Sri Lanka and that was my only goal" © Getty Images

My 143 at the MCG [1995] gives me a lot of pleasure because we were pretty much pushed throughout the tour. In Perth we were accused of ball-tampering for nothing. The outfields and the side wickets were so rough, the ball was being roughed up and we were accused. Then in Melbourne, Murali's chucking incident. We went through a lot of hard times in Australia in 1995-96.

I would have changed my style to play Twenty20.

I wish I could have tested myself against the West Indies attack. I never played against West Indies in a Test match. The only Test they played in Colombo, I wasn't playing, because I was coming back from injury. But I played a lot of one-dayers against them.

One captain, player and person I admire is Mahela. To me, he is a complete cricketer and a captain, and the most important thing is that he is a great person. Sometimes you can have great captains and great players, but they can be pretty bad people to deal with. You've got to give credit to Mahela's parents.

I was ten years old when I got my first hundred. I was batting with Hashan Tillakaratne, who also got a hundred in that game for our team at Isipathana College. Hashan and I started playing cricket together at around seven.

If SLC was run like a good business, with some strong leaders, we wouldn't be in debt. We are the only country that has had a World Cup and lost money. Even Bangladesh made money. We are still not in the top two or three teams in the world - we are still in that middle band. There is too much politics.

I have no regrets at all about retiring early. That period gave me a lot of time to settle down in Australia. Some people will say I am the only player who hasn't earned the money that others have. Money is nothing.

I remember beating West Indies for the first time, in 1989. They were captained by Viv Richards. Ambrose, Walsh, Marshall, Bishop were all there. Dessy Haynes and Richie Richardson as well. I got the Man-of-the-Match award because I got 60-something. I knew I could handle them.

Now Arjuna [Ranatunga] and I are very good friends, but there was a time that we didn't see eye to eye. The board was making things very difficult for me.

I remember the moment I decided I wasn't going to play for Sri Lanka anymore. I was here, in Australia when I decided that enough was enough.

I was at extra cover when Murali was called for throwing at the Boxing Day Test. Initially we thought he was called for overstepping. When we realised it wasn't for overstepping, something told me this was going to be a big problem. Not just for us but for world cricket. We were a pretty united team and we were not going to let somebody control us and get away with it.

I made my debut for Sri Lanka as a keeper. I always knew I had to have a second skill, because I knew I was not a fantastic bowler. That helped me get into the national team earlier.

My concentration was better than any other Sri Lankan's. There was one innings - I'm not sure I even want to go there - I think I have the second- or third- slowest Test hundred in world cricket. It was around 540 minutes to get to the hundred. I think concentration was one thing I had, but the way the game has changed, you most probably don't want anyone like that.

At the time I didn't think that the 1996 win would be such an important occasion for the country. After my retirement I realised how much it meant.

I played for passion and the country.

I don't want to go into administration. I don't think by doing something like that I'm going to pass my experience or skills to anybody. It's got to be in some kind of coaching capacity.

It's exciting that Sri Lanka are now getting cricketers from the regional areas, but what I'm hearing is that they still have to come to Colombo after they get selected. That means we have to build that structure in those places - to have facilities in Galle, Matara and other areas.

In the 1996 World Cup, our top seven had about 1000 games between us. That was a huge amount. No other side had that amount of one-dayers behind them. We had Sanath [Jayasuriya] and Kalu [Romesh Kaluwitharana] opening, and from No. 3, which was me, we had Aravinda [de Silva], Arjuna, Roshan [Mahanama], Hashan. That was a solid batting line-up. We knew at least two of us would always click. That was a strength that Arjuna used, because we weren't a superstar bowling attack. Murali wasn't the guy who could run through sides back then.

I never had dreams outside of cricket as a kid. I always wanted to play for Sri Lanka and that was my only goal.

"I had the confidence that I could clear any ground, and I have done that. I would have enjoyed T20"

I really struggled with the lack of intensity in club cricket after I retired from internationals. I played six seasons here and in the last two, I moved from district cricket to a different league. It was still on turf but the wickets weren't covered and the tracks were slow and quite bad. My motivation was not there. Some days I felt like I didn't need to go to training, and that told me, "Hang on, you need to give up because it's not right for the club."

I was in a silly mood after the 1996 final and I can't believe what I said. They were playing a clip of that here recently, where I was talking to the Australian press. I said, "Now we are the world champions, and pretty soon we will get up there in Test cricket as well."

You could say I was like a hero at the school when I was captaining Nalanda College, but there is a bar at which you have to keep performing. They expect when you walk in you will do something for the school.

The most difficult spinner for me was Abdul Qadir.

I read something about Arjuna saying that when he was playing, I was the hardest hitter he had seen.

I'm an Australian citizen but Sri Lanka is home and it will be home always for me and my wife. The first three to four years in Australia I struggled a lot. It took a long time to get to where I am now.

Even on Test debut, I wasn't nervous. In the first innings I was playing as a keeper and I came in at No. 8 or something. I walked in to face Imran, Wasim Akram and Abdul Qadir.

When I was playing, Warnie didn't have a good googly, and you need that for a left-hander. Warnie's googly was most probably the worst in the market in those days.

Akram and I had a lot of battles. He's the best bowler that I have faced, and a lot of cricketers in that era will say he is one of the best bowlers. Even Ponting will say Akram was a tough competitor to come up against.

I love seeing my old Sri Lanka team-mates. We've known each other since we were kids, and now we have children who are in their 20s. Roshan Mahanama and I go back a long way and we're very close friends. We talk to each other every second week or so on the phone. 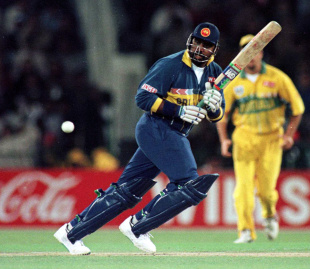 I had the confidence that I could clear any ground, and I have done that. I would have enjoyed T20.

I was listening to Mark Taylor last week, and he said, "The Sri Lankans played our game in that final." And that's what exactly what we did. We started dictating terms to them when normally they were used to dictating terms to us.

In the eighties, the school cricket standard in Sri Lanka was very high. All of us went straight from school into the national team. Arjuna, Aravinda, Roshan Mahanama, Hashan and myself - we were all scoring big runs in school cricket.

Michael Clarke and Alastair Cook have that same ability to get a team together that Arjuna had. I really like Clarke and I've recently started liking Cook.

In the eighties Sri Lanka were one of the small sides that other teams came and played. Now people expect Sri Lanka to do well. Then people pretty much expected us to lose, so if we drew a game, it was like a win for us.

We did certain things we shouldn't have done in that Boxing Day match. We didn't shake hands with the Australian team after that Test, or in the one-dayer in Sydney. That, to me, is a bad thing. It's a gentlemen's game. If you have issues, you take it up, but that is going to the other extreme.

Aravinda and Arjuna were two completely different people in the middle. Aravinda doesn't talk too much - that's the way he focuses. Whereas Arjuna would say, "Hey, don't do that" or, "There's only this amount of time left, come on, let's do it." I enjoyed both of them. I was a bit of both, and they helped me focus. They both knew that they could depend on me to hang around, and I would stay on one side and they can play their shots. If either of them were getting bogged down, they would come to me and say, "Mate, can you take the strike, because I feel a bit uncomfortable." We discussed those strategies.

Sport and business go together. Both are a lot about how to get the best out of your team. 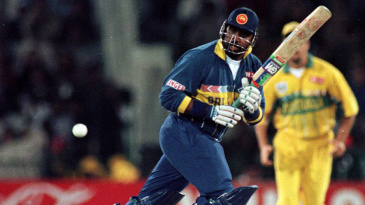 'I don't blame Arjuna for my early retirement'

Former Sri Lanka batsman Asanka Gurusinha talks about playing and coaching in Australia, and tactics during the 1996 World Cup