'Ninety per cent of the crowd there cried' 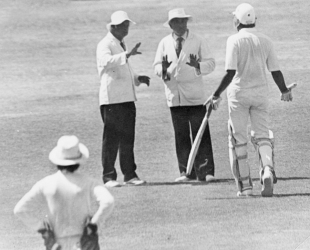 The dramatic final moments of a famous game in 1991 are etched in the memory of those who played it, watched it at the ground and on state television; newspaper clippings and a few photographs preserve them to this day. Haryana did the unthinkable then, beating Bombay at the Wankhede Stadium in the closest Ranji Trophy final ever, and the recollections of a 16-year-old ball boy who patrolled the boundary near the Vijay Merchant stand are as vivid as any historical record.

"There is a ground, a square-leg umpire, next to him is [Dilip] Vengsarkar sitting down in a namaz position, the main umpire taking the stumps out, nobody else," he remembers, almost 22 years later, over a cup of coffee in Bandra. "Abey [Kuruvilla] and Lalu [Lalchand Rajput] had also walked off."

This wasn't a time for a Flintoff-Lee moment. Vengsarkar lay at square leg, crying inconsolably, well after the Haryana players had finished celebrating their victory and charged towards the dressing room. "I don't think anyone dared to go near him," the ball boy recalled.

Moments before, a mix-up between Rajput, Vengsarkar's runner, and last man Kuruvilla had resulted in a run-out, one that caught Bombay short by two runs in their chase of 355. Vengsarkar, who had injured his thigh, had played a pivotal role in getting them that close from 34 for 3, and he ultimately remained unbeaten on 139, but bore the regret of not seeing his team through.

"There was Prasad Desai, a reserve player, and he went and got Vengsarkar inside. I was closer to the dressing room as he was coming back. I saw him cry like a child, crying like a baby. I'll tell you, 90% of the crowd that had turned up there cried. They were not sad, they were distraught. That is something I've never seen."

The ball boy was already a Bombay Under-16 captain, and the lessons he learnt from that game were to stay with him for the rest of his career. He went on to become captain of Mumbai, led his team to a Ranji title in 2006-07, and was part of eight Ranji Trophy-winning sides. Two people he knew well, Sachin Tendulkar and Vinod Kambli, were already part of the Mumbai team then, and he, Amol Muzumdar, not for the first time, was next in line.

He had been at Shardashram Vidyamandir School in Dadar with the two and was the batsman waiting to come in when the pair amassed a record stand of 664 in a Harris Shield game in 1988, and it wouldn't be too long before he made his name for Bombay by scoring 260 on debut in 1993-94, against the side he had seen beat his own in that final three years earlier.

"Prakash Kelkar, who was known in the cricket circles in Mumbai, asked me if I wanted to be a ball boy for the final when I met him accidentally on a train back home," Muzumdar said, before rattling off the names of the 11 cricketers who played that game for Bombay. "The fact that I can remember [all the 11 names] 22 years down the road, the first XI, it tells you the kind of impact it had on my mind then. "

Bombay had eight Test cricketers in their line-up - among them Sanjay Manjrekar, who was captain, and Vengsarkar, both of whom Muzumdar was in awe of. He had no inhibitions about going in to the Haryana dressing room and meeting their captain, his icon, Kapil Dev, but the Bombay dressing room, Muzumdar says, was a lakshman rekha (line of fire). "I asked Kapil Dev for an autograph. And I was in my whites, and he looked at me and he said, 'Are you a cricketer?' I said, 'Yes, sir, I am an Under-16 captain of Bombay.' He signed and said, 'Henceforth, don't ask for autographs, sign autographs.'

"I remember Kapil warming up. He was catching everything. Also, what I remember is his throwing. He was telling the Haryana keeper, 'Go five steps back every second throw.' He was doing that and every single throw the ball used to land in that keeper's tummy, no matter how many times he went five steps back. It was magnificent to see that kind of control."

Haryana chose to bat and piled up 522, thanks in part to eight dropped catches by Bombay fielders, Tendulkar and Kambli included. "I remember, at the end of the day's play, Sachin was on the ground, still catching," Muzumdar recalls. "He dropped a high catch, and he was pretty upset about it.

"Kambli was having a great season; he got a hundred in the semi-final. He told me from the boundary line, 'Amol, come on, it's time for you to come inside the boundary rope, not sit out.' I could not react."

Kapil picked up three wickets in Bombay's reply, including that of Kambli, who he walked off with, a hand on the young batsman's shoulder, after bowling him out.

Bombay conceded a big lead, but they bowled out Haryana for 242 in the second innings. They then had a little over two sessions to chase 355, but at 34 for 3 at lunch on the final day, all hopes rested on a 18-year-old who had already acquired a reputation for being a game-changer.

"The public there was mainly office-goers, who watched a lot of Mumbai games. Manjrekar was just gone before lunch. Everyone had just one thing on their minds, 'Tendlya laagla pahije, bas [Tendulkar must click]'

That game taught me anything is possible in cricket. In half a day if a side can chase 350 against a team with Kapil, anything can happen."

Tendulkar and Vengsarkar shared a 134-run stand for the fourth wicket, of which Tendulkar smashed 96 off 75 balls. "Today there's T20; you can associate a 96 in 75 balls with Rohit Sharma or Virat Kohli or anybody. But, in those days, 96 in 75 balls was unheard of in a first-class match.

"I clearly remember one shot by Sachin off Chetan Sharma. Chetan was bowling with some pace, and he was sharp. He bowled a ball from the North Stand end and Sachin hit the ball flat-batted, it went over mid-off, probably 20 feet, and landed straight into the crowd, and was still travelling and going at a very low height. That shot just set the tone. It was just after lunch, and it changed everyone's psyche. The buzz around was, 'Toh laagla aahe [He is in the groove]' and people just started coming back into the ground." Reports said the turnout on the fifth day was close to 18,000.

The game changed again, frustratingly for Mumbai, as Tendulkar was caught at extra cover off a full toss, and Kambli went after scoring 45. Vengsarkar was solid at one end, but Bombay lost Chandrakant Pandit, Raju Kulkarni, Salil Ankola, and Sanjay Patil, all in quick time.

When last man Kuruvilla, picked out of the blue from an MCA-Mafatlal camp by Manjrekar for the final, walked in, Mumbai needed 50 to win. Vengsarkar immediately switched gears. He went after the offspinner Yogendra Bhandari, smashing him for three sixes and two fours in an over. "One shot, I remember, hit the roof of Wankhede. It hit the T of 'Tata Enterprises' and came back."

Vengsarkar showed plenty of faith in Kuruvilla, taking singles off the first balls of several overs and leaving his partner to negotiate Kapil and Sharma, which Kuruvilla did successfully. "I learnt just by watching Vengsarkar bat with Abey, that when you show a bit of confidence in your tailender, he would react positively and the game might get closer. Sometimes when you are batting on a hundred-odd and there's a tailender batting, nine fielders are on the boundary, you can't possibly hit boundaries and sixes. All you can do is take that single and show some faith and hope for the best."

As Bombay drew close, and the Haryana fielders grew more nervous, "Kapil was walking in the outfield and signalling to everyone waving his hands, 'Thanda, thanda [Keep your cool].' I remember one stop by Rajesh Puri at the boundary line; with eight or nine needed, Vengsarkar hit one fiercely towards long-off and Puri dived full length, stopped it and saved three runs."

With three needed off 14 balls, Kuruvilla played one to short fine. Rajput called for a single, the throw went to the non-striker's end and Kuruvilla was run out, with a stunned Vengsarkar watching from square leg.

"The drama was enough, what unfolded in front was enough, the picture told you the story. You don't dwell too much into things," Muzumdar said when I asked him why he hasn't spoken about the game much with those who played it. "That's maybe an unwritten cricketers' rule. What unfolds in front of you, that's enough for you to picture what is happening or the emotion that's being shown. What happens in the dressing room stays in the dressing room."

The lesson learnt still rings loud and clear by way of the attitude that has come to typify Mumbai cricketers. "At the end of the day it's a cricket match that has been lost, not a matter of life and death. But the sight of so many people crying, even Vengsarkar crying, it told you, you can't lose. Being a Mumbai cricketer, you just can't lose.

"That game really crossed my heart. I cried a lot again, in 1995-96, when we lost to Tamil Nadu in the quarter-final. It was my third year after my debut and it was the first loss of my career, in Tirunelveli. I didn't associate Mumbai with any losses. It took two years for me to register that we could lose."

Are the younger cricketers he meets today aware of what happened then? "It's a different era now. Unless it's told to them [a sense of history instilled] they wouldn't be interested.

"I don't know about others, but I tried to do that as captain. I would make groups, give them a topic to work on, use the internet and check it out. I got positive feedback from a couple, a couple just ignored it. I got feedback from Sahil Kukreja once - he had written about the 15 glorious years of Mumbai winning [1958-59 onwards]. I've still got a copy. Sometimes when I am going through the drawers, I still read from the first line to the last line. That was good from Sahil.

Siddhartha Talya is a senior sub-editor at ESPNcricinfo