Dean Jones: lost bodily fluids by the gallon but was under pressure to bat on © Wisden

Australia and India meet at the MA Chidambaram Stadium in Chennai this week for the seventh Test between the teams at the venue. The third of those encounters, played 26 years ago, was one of the great Test matches and remains one of only two Tests to be tied. One of Australia's heroes of that match, Dean Jones, reflected this week on the match and its aftermath.

Before we left Australia I spoke to Lindsay Hassett about the right way to play spinners. Then I paid my own way and flew up to see Ian Chappell. He plied me with way too many beers over a lunch and I learnt heaps from there. I thought, "Right, this is the way I'm going to play."

In the first few games of the tour I got a lot of 20s and 30s and I kept using my feet to the spinners but nothing really came of it. But I was thinking, "I'm going to go down playing the way I want to play and using my feet."

Jones had played only two Tests previously, on the 1984 tour of the West Indies. Two and a half years later, he still didn't know in the lead-up to the Madras Test if he was going to be part of the side.

I was rooming with Mike Veletta and we were both in line for it. It was a 50-50 bet. The coach, Bob Simpson, roomed us together just before that Test match and Mike was thinking he was going to play and I was thinking I was going to play. Someone was going to be upset. It was two days before the match that AB [Allan Border, the captain] called me into his room and said, "I want you to bat No. 3 for Australia here. I like the way you play." It was the first time he'd ever really spoken to me, even though we'd already been there for four and a half weeks.

Border won the toss and in extremely hot conditions chose to bat. Jones and David Boon gave Australia a strong start and they reached 211 for 2 at stumps on the first day, with Jones on 56.

I was very nervous. We put so much pressure on players and say you haven't made it unless you've made a hundred for Australia.

I didn't drink water overnight. One hour into day two I knew I was in trouble. I didn't drink anything apart from a cup of tea or coffee. We didn't know anything about dehydration and rehydration back then. Then I just batted from memory basically. I can't remember much from 120 on. I know nearly every shot in every innings I played. I can't remember a thing after 120 in that innings.

Jones struggled to control his bodily functions in the extreme heat, urinating involuntarily and vomiting, and he went to tea on 202 not out. He didn't want to return to the crease, but was taunted by Border that if he wasn't up to the job "we'll get a Queenslander out here", meaning the next man, Greg Ritchie. (Jones is a Victorian.)

I didn't want to come out after tea. I was 202 and I was just gone. Simmo and AB just pushed me out and said, "You're batting." When you're urinating in your pants and vomiting 15 times, you've got massive problems. It wouldn't happen now because of litigious players and workplace safety. Should we be playing in 42 degrees? We go off for rain but we don't go off when it's 42.

When he was eventually dismissed for 210, Jones was rushed to hospital and put on a saline drip. But he returned to the Test and saw some outstanding work from his team-mates, including Greg Matthews, who famously wore a long-sleeved jumper in the Madras heat.

He made 70-odd runs and took ten wickets. He actually asked for a long-sleeved jumper on the last day, which blew everyone away. Then he parked himself on the boundary in front of the Indian team and told them, "It's not hot, we love it like this", and started to yabber away at them. He was unbelievably great, grew an extra leg.

It was Matthews who claimed the last wicket of the match, Maninder Singh lbw for a duck with Ravi Shastri at the non-striker's end. The scores were tied but there was confusion about the result, just as there had been during the first tied Test between Australia and West Indies in 1960.

Ravi probably should not have taken a single off Matthews and should have hit the winning runs, instead of leaving it to Maninder Singh.

I was out on the boundary. There are two scoreboards at the ground and one said we were one run in front and the other one said the scores were tied. I didn't know if Maninder had hit it or not. All I could see was Greg Matthews jumping up and down, and all Allan Border was worried about was getting the ball at bat-pad.

And then as we ran off the ground, I said, "I think we've won it." And someone else said, "No, I think it's a draw." I said, "How can it be a draw, we've got them out twice." And then the first thing Bob Simpson said was, "I've been involved in the two tied Test matches." He played in the 1960 tie.

That night, within one hour of that match, after five days of the worst heat ever, we had to travel to Hyderabad for a one-day international. But we had the best party together, the best party you will ever see, where all the boys got together and had a few drinks. It was the first drink we had had on the tour.

That started some great relationships. There was no one else, just us. Here I am, speaking to Sunny Gavaskar and Kapil Dev and Ravi Shastri and Maninder Singh and Mohinder Amarnath. It was just fantastic, it really was. They had a lot more experience than us. But with all of that said and done, the two countries have grown a great alliance together and have become damn good mates.

Watching the way Gavaskar had batted in the second innings was an invaluable lesson for Jones and the rest of the young Australians.

Did I learn something about how to play Test cricket watching Sunny Gavaskar on a turning track? I ended up catching him in the covers, but he made 90. It was the way he would play straight but play it through midwicket off Ray Bright, when he was turning it two feet. The way he managed himself at the crease, the routines he went through. I learnt so much just watching him bat there on that last day. God, he was good. At the end of the day's play, guys were saying how good was Sunny. We were young kids just trying to learn.

Then we got a rained-out Test in Delhi and we had to bat out our last day on the huge turner in Mumbai to get a draw. Watching and absorbing the way Sunny and the Indians played on that last day in Madras taught us how to bat at Mumbai. We actually got a drawn series out of them.

Jones believes the tied Test was the start of a new era in cricketing relations between Australia and India.

We had never really had a cricket match that defined the two countries' relationship. We were the first Australian team that really enjoyed going to India, that really enjoyed the people - so much so that we made special efforts to get involved in their culture. Our official photograph for the tour was done in front of the Taj Mahal, and from then on we've gone to the effort to go to one of the landmarks of the country and do a photo there. We really enjoyed the people and the food and we started to get on. Every other Australian team had said, "You're going to get sick, there's millions of people, it's hard work, the grounds are awful and they'll turn square." And now look where it is. Now it's called the Border-Gavaskar Trophy - two of the great guns. 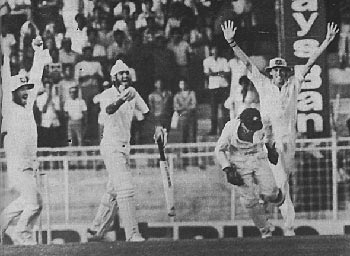 Twenty-six years on, Jones can see similarities between Border's 1986 team and the side led by Michael Clarke this year.

Our team then and this current Australian team are very similar in a lot of ways. One, the respect is not there yet from overseas or even from the home fans. Two, they are inexperienced in India, in that not a lot of them have played first-class cricket in India. We were the same. We pushed ourselves into a situation where we did really well.

It's interesting that we've had a lot of great Australian cricketers over the last 20 years but we've only won once there since 1969. So we're asking a hell of a lot from our current Australian team to go over there and whip their backsides. If there is an opportunity to win one, it's now. But I'm expecting India to win the series. They're still overwhelming favourites for me. 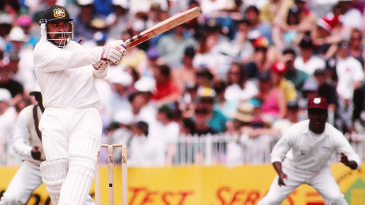 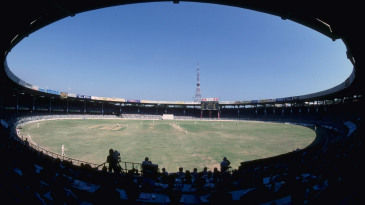 Gold from a Madras furnace

On the last day of the India-Australia Test 30 years ago today, it all came to a boil, in more ways than one. The umpires, and others who were there, look back

When Dean Jones fought heat, the bowlers and his own body to rack up one of the great double-hundreds