A soggy Nottingham hosted the low-scoring first Test of the 1981 Ashes, and the quick bowlers ruled the roost 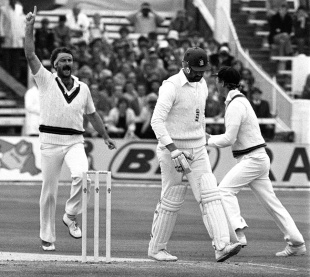 Lillee dismisses Gooch for 10 in the first innings © PA Photos

The 1981 Ashes. We all know what happened. Ian Botham got a pair at Lord's, for the first and only time in his Test career. Immediately after the Test he resigned from the captaincy, having been in the job for 13 tumultuous months, a period in which England lost four and won none of their 12 Tests. In the next match, at Headingley, Botham destroyed Australia, first with the ball, then the bat. Unburdened of the leadership duties, his dominance would only grow and the series came to be known as Botham's Ashes.

But it was Australia, under Kim Hughes, that struck first in the six-Test series. Hughes had been appointed captain after Greg Chappell decided not to tour, but in Dennis Lillee and Rod Marsh, Australia had two warhorses, both on their final tour of England. A bout of pneumonia forced Lillee out of the first five tour games, but he recovered in time to play the three ODIs, which Australia won 2-1, and the last two county matches (he took a five-for against Middlesex).

By the time Australia arrived in Nottingham, the world's best bowler of the time was ready to charge in with the new ball.

Trent Bridge was wet in the days leading up to the first Test and conditions did not improve much across the four days the match was played. Both teams had bowling attacks capable of exploiting the seaming conditions. Hughes put England in to bat on a pitch prepared by Ron Allsop, the 1980 groundsman of the year.

"The cloud was as black as you could imagine and was about 100 feet above Trent Bridge," says former Australian fast bowler Geoff Lawson, who was playing his second Test. "You felt like you could jump up and touch it.

"There was never a chance of the pitch drying up with the constant drizzle and in overcast conditions. The pitch retained the greenish tinge throughout, more or less."

Lillee took a little while to get into his rhythm, but he soon had Graham Gooch playing forward and edging to slip. However, it was Terry Alderman, the debutant fast bowler from Western Australia, who troubled England the most, and the lively and eccentric Rodney Hogg, the third Australian quick, who exacerbated their problems.

For England, only Mike Gatting displayed the composure and discipline necessary: he scored the first of only two fifties in the match. He mostly played close to the wicket and cut the ball safely to pick up his runs.

"It was difficult," Gatting recalls. "I left a lot of balls, balls that I felt would bounce over the stumps. And that is how I managed to hang around for a little while on a bowler-friendly pitch. The ball was moving around a lot. When you talk about good knocks - that was one of my better Test innings." His 52 allowed England to raise 185, a challenging score under the circumstances.

The only other England batsman who showed some resolve was the tailender Graham Dilley, who hit some powerful drives and put on valuable partnerships with Gatting and last man Mike Hendrick.

"It was his series with the bat. He went to get some more important runs in Headingley later during that Ashes," says Gatting. "It was a situation where we really did need the runs and Dilley did very well to get those. Being a left-hander, it was probably easier to play on that wicket."

"We just got a bit lucky. There was not much between the two teams. The difference was probably the catching: if they had taken their catches, England might have won" Geoff Lawson

By the end of day, England's quicks reduced Australia to 33 for 4. Dilley trapped Graeme Wood in front with a swinging ball second delivery of the innings, and Bob Willis cut one into Hughes' pads in the last over of the day to pick up his 200th Test wicket.

But England's shoddy close-in fielding the next morning would play a significant role in the result of the match. Botham, who had dropped John Dyson on the first evening, now dropped two more catches - off Trevor Chappell and Allan Border. Border had already been a recipient of England's benevolence when wicketkeeper Paul Downton spilled an easy waist-high catch.

To Gatting that was the turning point. "We dropped Allan Border when he had about five or 10 and then he went to get 60-odd. Paul was a very good wicketkeeper. Sadly, he would have held the catch nine times out of ten."

The cold and the bad light did not allow England's fielders to be at their best. "The ball was always going to be coming to you because of the nature of the pitch," Gatting says. "But sometimes it came at a quicker pace than the fielder expected. And when they were flying around like it was in that match, it is quite amazing."

Lawson agrees. "The ball moved around the whole time, but since AB had such a good defensive technique, he could hang around there for some time. It was only him and Gatting who got the runs. Both were gutsy players, similar in attitude - wear a few on the body and do whatever they had to do to survive - so it is not surprising those two got runs."

Day three began badly for England when Graham Yallop, at point, dived to his left to intercept a full-blooded drive from Gooch to take the catch of the match. "The most pertinent difference was the catching: England dropped too many, dropping the initiative," David Gower wrote in his review of the Test for Wisden Cricket Monthly.

When Alderman dismissed Geoff Boycott for the second time in the match, and took Bob Woolmer on a pair - caught by Marsh "with the enthusiasm of a dolphin", as Christopher Martin-Jenkins wrote in the Cricketer - England slipped to 13 for 3. By stumps they were 94 for 6, with a lead of just 100. Gatting couldn't rescue them again: he was trapped by a low delivery from Alderman, who bagged a five-for to finish the match with nine wickets.

"It was certainly a challenge," Gatting says. "Alderman was accurate and consistent. Hogg had the same consistency and five yards of extra pace. He was quite lively. Lillee was his usual world-class bowler. It was a fairly varied attack. Alderman was not fast but he was able to nip the ball off the seam. He kept the seam very upright and was just quick enough. He bowled a very full length, so if he did seam back into you, you had very little chance to adjust. It was a length that got you driving a bit. And he bowled very straight more often than not." 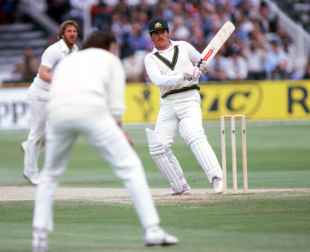 Border top-scored in the match with 63 © Getty Images

On June 21, the longest day of the year, the sun finally came out, but the game was up for England, who collapsed to set Australia 132.

Dilley took four Australian wickets with his lethal pace and movement, but they hung on, and were six down when debutant Trevor Chappell pushed a single to cover to give Australia 1-0 lead in the series.

"We just got bit lucky," says Lawson. "There was not much between the two teams. The difference was probably the catching: if they had taken their catches England, might have won. It was one of those low-scoring close Test matches. The wickets were falling all the time. There was always tension. That is what you get when bowlers are taking wickets in Test cricket. Even the last day, if another wicket had been lost, England would have felt more confident."

No spinner played in this Test. There wasn't any need for one. It was a festival for fast bowlers.