'If I could do it all again, I'd gamble more' 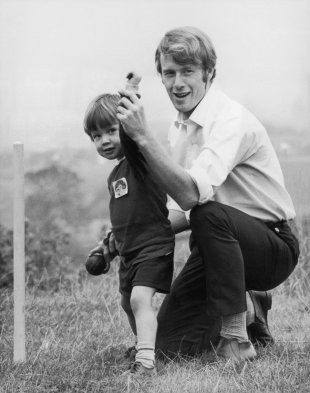 An avid grower of wild flowers, Lever spends time with his son in the garden Ian Tyas / © Getty Images

My real England debut was 1970 against the Rest of the World, although they later took Test status away from it. Bit of a shame. Seven for 83, I took. They were already two down when I got hold of the ball. Then I got Barlow, Pollock, Mushtaq Mohammad, Sobers, Clive Lloyd, Procter and Intikhab. One of my better performances, you could say. Some press guy told me it was the best seven ever taken.

Would I have been able to play again if Ewan Chatfield had died? I doubt it, I doubt it. I thought he had died. The amazing part of it, I found out, was that the New Zealand team doctor was on his annual holiday! It was an experience I wouldn't care to repeat.

You could say Lillee and Thommo worried us, yeah. The first five batsmen, they were taking that many pills, they rattled. There weren't many of 'em sleeping too well.

My first contact with cricket was one Christmas when I was about six, my brother seven. There was a foot of snow outside. We thought the big present was going to be a sledge or something like that, but it was a pair of cricket boots each and a membership to Todmorden Cricket Club. We didn't even know what cricket was then. We said, "Can't we swap these for something else?" My mother said, "I'm not having you on the street corners, messing around with these lads from the estate. You'll go to the cricket club." And that was that.

Apparently, when he was a lad, Aggers used to come regularly to Old Trafford especially to watch me bowl. I could have thought of better things to do with my time…

Brian Statham couldn't have captained a rowing boat. Brian was a lovely fella and a fabulous bowler, but captaincy was not his strong suit. Jack Bond took it over and shook it up a bit, and we really started to go places: '69 we won the John Player league; '70, '71, '72 we won the Gillette Cup.

We played a Sunday League game - I forget against who, but we won easy enough - and afterwards I went over to watch my brother Colin, who was pro-ing for Heywood in the Central Lancs League. When I got there somebody said, "He's had a good day, has Colin." He'd made 60-odd and was on his way to five wickets, so ended up having a double collection go round the crowd. I'd been paid £10 by Lancashire, plus a £4 or £5 bonus, and he picked up over £40. First thing he says to me when he gets off the field is, "Get 'em in, then" - the tight-fisted so-and-so!

The only time I ever refused to bowl was in Perth, against Western Australia, and it could have finished my career there and then. I bowled a lot of overs into the Fremantle Doctor - me and Derek Underwood alternating; I'd go on a Sunday League run, then back on the long run when I got my breath back. Anyway, when John Snow and Ken Shuttleworth had had their fill of it downwind, on comes Boycott, with his cap the wrong way around, downwind. Illy throws me the ball, I throw it back. He throws it again, I throw it back. "I'm not bowling," I said, "when there's a clown like that bowling downwind." "Well, he won't be able to bowl at the other end. He's not strong enough." It was the only time I ever refused to bowl. It was the only time I ever argued with Illy, too, a great friend.

Although it's in the Lancashire League, Todmorden's just over the border. Technically I'm a Yorkshireman, but I don't brag about it.

"You could say Lillee and Thommo worried us, yeah. The first five batsmen, they were taking that many pills, they rattled"

Gary Gilmour bowled well - swung it round corners - but we blew ourselves away [in the 1975 World Cup semi-final], really. He was batting with Walters and they were struggling, six down and 50-odd shy. I bowled one across him and he nicked it straight to Greigy at slip, who shelled it. That cost us the game. Simple as that. They only had Lillee, Thomson and Max Walker left. Maxi the taxi: well, he couldn't spell "bat".

I was really nervous before I went on the field against the Rest of the World, practically shaking, because I knew how good these guys were. I looked down their side - Pollock, Richards, Kanhai, Sobers - and then it dawned on me: I can't lose here. If I bowl well, I'm on the boat to Australia. If I don't, well at least I've had a little taste of it, you know. But getting those seven got me on the Ashes trip.

My mentor was a South Australian, Neil Dansie. He was the first coach I ever had. He was also the first person I saw when we landed in Australia in October 1970, waiting at the bottom of the steps.

Central contracts came from a conversation when I was England bowling coach, John Edrich was batting coach, and Ray Illingworth was the manager. It was John Edrich who pushed it forward in the main.

We should have won [the County Championship] a couple of times in the early seventies. The weather at Old Trafford's not always the best, but you go down to the south-east and they have half as much rain as us. We have to play well.

When I was at Todmorden, I was a wicketkeeper - I know it sounds daft, but it's true. One day, for whatever reason, there were no quickies at the nets. Our professional was having a bad time against them, so the captain, Harold Dawson, said to me, "You look as if you're big enough. Do you think you can bowl?" I said, "I've no idea, I'll have a go." I had a dart, and afterwards the pro says to the captain, "Give this lad a go on Saturday."

Something struck me in Australia when I'd been out to watch the Centenary Test. We used to meet in the hotel lobby, 60-odd of us, and walk over to the MCG. I said to Ken Shuttleworth, "Which ones do you think were the quick bowlers?" He says, "What do you mean?" I said, "Have a look. Really have a look at these fellas." They were all hobbling down through the park to the MCG and looked awful. I thought then: it's time to finish.

He was a law unto himself, was Snowy. In the nets, when he bowled what he thought was enough - for him - he'd bugger off and go and have a shower. We'd be left bowling at the rest of the batsmen, piss-wet through with sweat. I got on okay with him, but not to start with.

Some people are saying England are gonna absolutely mash 'em, but you never write off Australia. Never.

I played a game for Lancashire in 1983. I was first-team coach, Jack Bond was manager. All the seamers had gone down injured, so Bondy says to me, "You're last man standing. You're going to have to play." I said, "Are you taking the piss? I haven't marked a run-up for seven years." Anyway, we batted first, didn't get a lot. You've got Botham and Viv playing. I bowled at Roebuck, mainly. Straight. He kept pushing me back. Figures weren't too bad, but he hit me for two fours in the last over. The following day I rolled off the side of the bed and on to my hands and knees. I had to put my hands on the side of the bed to lever myself up.

There was a Gillette Cup semi-final against Gloucestershire when they held the Nine O'Clock News back until we'd finished. Procter was bowling in the dark. I was next in. I went to the toilet seven times.

You've got to be extremely fit to be a fast bowler. You can't do it carrying an extra stone and a half of weight. The Chatfield incident: "It was an experience I wouldn't care to repeat" © The Cricketer International

I know it sounds daft, but I was quicker at 33 years old than I was at 30. I changed my run-up and action on that first Ashes trip, when we were in Tasmania. I used to have a curved run-up, but I watched the way a couple of the other lads bowled - especially Snowy - and I thought: I'm going to have a crack at this.

Thommo was something else. No matter what level of cricket you play at, you can always replay the shot in your mind - "What a crap shot I played there", and so on - but with Thommo you couldn't replay it, I found. You didn't really see the ball well enough.

I'm an avid grower of wild flowers. I plant them round the village - Bratton Covelly, in Devon - and people seem to appreciate them. Poppies are my favourite. The landlord of the pub, who's a bit of a card, put a notice up: "If anyone wants any opium, see Peter Lever."

Those people at Lord's, in the Long Room - the good old chaps - they didn't like us going down there and winning. To them we were rough buggers from the north. I can't say they enjoyed us monopolising the Gillette Cup final.

Was Statham a help to me? No. Only by watching certain aspects of his bowling. He never coached me - he couldn't coach, couldn't Brian. I don't think it was selfishness or anything like that. He was just one of those blokes, you know. It wasn't his bag at all.

I coached Ken Shuttleworth for a bit. He was having a bad time, couldn't get it right, so we had a couple of sessions and he came back at it. I lost my own place for a couple of games! Quite ironic, really.

My highest first-class score was 88 against India at Old Trafford, my home ground. If I'd have got 100, I'd have been on both honours boards, and I only played one [Test] match there. It was my own fault. The final guy to bat was John Price, and I ran him out. I smacked one and someone fielded it really well. I tried to turn round, he tried to turn round but slipped on his backside. It wasn't to be, as they say.

I don't often go to Lancashire now, as I live in Devon for one thing and I also had a bit of a fall out about my pension which I am still waiting to receive.

I coached Michael Atherton for four years before he went off to university. Everyone thought he was a miserable sod, with no sense of humour whatsoever, but they couldn't have been further from the truth. We used to get on extremely well.

If I could do it all again, I'd probably gamble more than I did. I had a young family and I had to be careful. But if I'd have gambled more - if I'd bowled quicker, earlier in my career - I'd have played for England sooner than I did. Later on I found out I could still swing it with an extra yard or two of pace. But that was when I was 32, you know.

'I honestly thought I had killed him'