'Sometimes I became my own worst enemy' 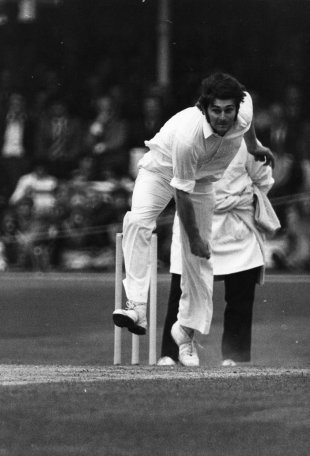 Chris Old: "What always made me laugh were the times when everything felt good, everything was working really smoothly" © Getty Images

The best I bowled for England was in Wellington in 1978. There was a howling gale blowing straight down the ground. It was a question of who's going to bowl into it. There was Mike Hendrick, Bob Willis, Ian Botham and myself. I'd bowled three overs downwind before lunch and gone for about 27 - I couldn't pitch the ball because I was totally off balance at the crease - so I said I'd do it. Boycott said, "You can't bowl into the wind; you've never done it in your life". I said, "Well I can't bowl any worse than downwind".

Being the only Englishman to have played in both Centenary Tests means a hell of a lot to me, especially when you consider the others who did were Dennis Lillee, Greg Chappell and Rodney Marsh. Not bad company.

Mike Brearley was the best captain I played under for England. He had that skill of knowing what switched people on, what motivated them, and he did it all in such a wonderful, calm manner. I was a rhythm bowler and he knew that sometimes my rhythm wasn't there, so he'd try and get me to relax a bit. Sometimes I got very uptight with situations and became my own worst enemy.

Fred Trueman once told me I had to run around in a shower to get wet.

At the age of 14, I came back from a Yorkshire Second XI game to be told by my club, "I'm sorry, but you can't play on Saturday", because the League - the North Yorkshire and South Durham League - insisted I now had to be a professional to play in it. The good thing was that Middlesbrough didn't have a professional that year.

The captaincy of Yorkshire was very political. There was the Boycott incident at Scarborough, when we left Geoffrey out of the last home game. He'd done some articles in the papers saying how upset he'd been that he hadn't played in the Scarborough festival when earlier in the season he'd said it was an opportunity to give younger players experience. I asked Ray Illingworth whether he had permission to write those articles. He said no, so I said, "I've got 12 guys at the ground and you're telling me I have final say, so as far as I'm concerned Geoffrey doesn't play. Oh, and by the way, you're manager and it's your job to tell him."

Madras and Bangalore were the toughest places to bowl - the humidity levels were unbelievable. You walked out from the shadow and into the sun and you looked like you'd just stepped out of a shower. It was one of those times when I thanked Boycott for a comment he'd made. He said, "Just because you're hot and sweaty, doesn't mean you're tired."

We didn't feel as though Lillee and Thomson were actually bowling at us. We felt as though it was part of their way of trying to get us out. West Indies were entirely different. We felt that some of them were actually trying to physically hurt you.

The team that I went into, there was Fred Trueman, Don Wilson, Jimmy Binks, Tony Nicholson - they were all big characters. And in a different way as well.

Yorkshire were the first county to lose a Gillette Cup game to a minor county. My brother Alan was playing for Durham. A couple of days before, we'd talked about the game. I told him we'd win the toss, they'd bat, we'd bowl 'em out, we'd knock 'em off, then we'd all go home. Unfortunately it was wrong. We won the toss, we batted, they bowled us out, they knocked 'em off.

What always made me laugh were the times when everything felt good, everything was working really smoothly, you let the ball go and you looked down the wicket and saw David Bairstow taking two strides further forward.

"I made 43 in Perth, but facing Thommo there wasn't much fun at all. I remember David Lloyd got hit you-know-where and came off looking several shades of green"

I only got the one wicket at Headingley in 1981, but it was an important one: Border, bowled with a ball that nipped back. As a left-hander, you have an instinct of what they like and don't like. It was the third ball of an over, more or less the same as the first, which he left alone but it had come back over the top of the stumps. His eyes kind of popped out of his head a bit. The next ball pitched around the same place, so he's playing at it - you know, "if it doesn't bounce much I'm in trouble" - and of course it went the other way and he played and missed. The third one pitched in the same area again - "Do I play this or not?" - and he started to try and get the bat out of the way, only it caught the bat as he was withdrawing it and it cannoned off into the stumps. Possibly a bit fortunate for me in some respects, but I think they were the three best deliveries in a row that I bowled at anybody in Test cricket.

I didn't mind which end I bowled from at Lord's. It was just a case of getting your mind into gear with which end you were at and what you were trying to do.

Both Alan and I played our first internationals in 1972, although that's a slight bone of contention with me because I actually made my debut in 1970 against Rest of the World at Headingley, when the South African tour was cancelled. They're not called Test matches now, but when you look at the state of their side, it's stronger than any Test side you could think of: Barry Richards, Pollock, Barlow, Kanhai, Clive Lloyd, Sobers, Mike Procter - not the worst team!

My first Test wicket would have been Clive Lloyd, when I knocked his middle stump out, but when you look in the records it's a guy called Ramnath Parkar, and a lot of people say "Who?" It just doesn't have quite the same ring to it.

After the Kallicharran incident, there were thousands of people surrounding the dressing room and we were basically locked inside. If it hadn't been for Garry Sobers, we'd have been there all night. He walked out, put his arms up, then came to us and said, "Right lads, I'll get you back to the hotel." He grabbed hold of Greigy and said, "Follow me. You're safe while you're with me." He walked Tony through the crowd to the waiting bus and we got back to the hotel. 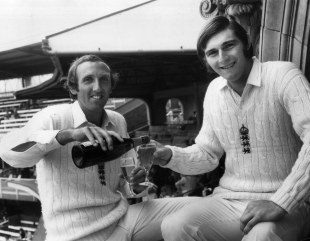 Graham [Dilley] and I had chatted beforehand [at Headingley in 1981] and said if the ball was up, we'd try and hit it. But then, as you progress - and we'd got a lead by the time I went into bat, but not very many - you still try and bat as you said, but Ian had started to go and the field was beginning to spread out. It's having that balance - you can't hit every ball. You've still got to pick them out. But we'd sort of widened the margins of what we were going to attack.

I made 43 in Perth, but facing Thommo there wasn't much fun at all. I remember David Lloyd got hit you know where and came off looking several shades of green.

Although they weren't Ashes matches, the Centenary Tests still had the same edge - especially the first one, in Melbourne. Every time you went out of your hotel room you met an English or Australian ex-Test cricketer.

Andy Roberts, in particular, was very ruthless. I never really felt that Michael Holding was that type. He was just very, very quick. Whereas I'd had a run-in with Andy in England, and in the West Indies before that, and he made you very aware what the situation was. He'd got 40-odd and I bowled him a bouncer that basically knocked him over the top of the stumps. It hit him on the hand, not on the head, but he gave you a look that basically said: "Remember me. I'll be after you". I knew I wasn't going to be playing forward very much.

Twenty20 is not something I would travel a long way to go and watch.

My top score in Tests was 65 against Pakistan. It meant a lot, but I was disappointed to get out, lbw to Intikhab's googly, which, being left-handed, made me feel that the ball had pitched outside leg stump. I wasn't best pleased with that.

The secret of a good batter? Water and plain flour, with just a small amount of self-raising flour, then getting it to the consistency of cream. Having a nice light batter is the key to good fish and chips.